July 1654: Pascal’s Letters to Fermat on the "Problem of Points" 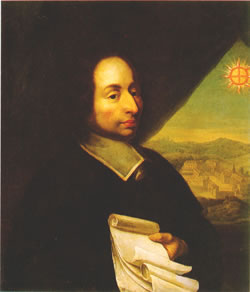 Games of chance are as ancient as human history, with archaeologists unearthing evidence of them on prehistory digs. Gambling also led, indirectly, to the birth of probability theory, as players sought to better understand the odds. In the mid-17th century, an exchange of letters between two prominent mathematicians–Blaise Pascal and Pierre de Fermat–laid the foundation for probability, thereby changing the way scientists and mathematicians viewed uncertainty and risk.

Born in 1623 in Clermont-Ferrand, France, Pascal was a child prodigy largely educated by his father, Etienne, a local magistrate who was also well-connected with some of the most famous intellectuals of that era, including Rene Descartes and Pierre de Fermat. As a result, young Blaise was privileged to sit in on salon-style meetings of some of the greatest minds in Europe. At age 11, he wrote an essay on the sounds of vibrating bodies; the following year, he devised his own proof that the sum of the angles of a triangle equals two right angles.

By the time he was 16, Pascal had progressed sufficiently in his mathematical studies to write a treatise on conic sections, giving rise to what we now call Pascal’s Theorem, which states that if a hexagon is inscribed in a conic section, then the three intersection points of opposite sides lie on a straight line. One indication of how impressive this achievement was is the fact that Descartes, when shown the paper, initially did not believe the young teenager had written it.

When Pascal’s father became king’s commissioner of taxes in Rouen and was struggling with endless calculations and re-calculations, Pascal–not yet 19–invented a mechanical calculator for adding and subtracting to ease his father’s task, which became known as the Pascaline. By 1646, he had become interested in Evangelista Torricelli’s experimentation on barometers, performing definitive experiments to demonstrate the existence of a vacuum. The SI unit of pressure is the pascal, in his honor.

In 1654, a French essayist and amateur mathematician named Antoine Gombaud, who was fond of gambling, found himself pondering what is known as “the problem of points.” It was first proposed in 1494 by an Italian monk named Luca Paccioli in his treatise Summa de Arithmetica, Geometrica, Proportioni et Proportionalita. In the game of balla, for example, six goals are needed to win the game. The question posed by Paccioli was how one should divide the winnings if the game is interrupted when one player has five goals and the other has three goals? The player with five goals should have a larger share, but how much larger should his share be?

Gombaud turned to Pascal, who had taken up gambling when his doctors advised him to abandon mental exertions for the sake of his health. The year before, Pascal had worked out the principles of “Pascal’s Triangle,” a method for determining the binomial coefficients for a given value of (a+b)n–similar to a method devised some 400 years earlier by Chinese mathematician Yang Hui.

Intrigued, Pascal realized he would need to invent a new method of analysis to solve the puzzle, since the solution would need to reflect each player’s chances of victory given the score at the time the game was interrupted. Thus began his legendary correspondence with fellow mathematician Pierre de Fermat that, over the course, of several weeks, laid the foundation for modern probability theory. Their respective methods involved listing all the possibilities, and then determining the proportion of time that each player would win, in order to solve it.

Fermat’s approach rested on a complete enumeration of the possible outcomes. For example, if the winner of a coin toss game needs to win the best of five tosses, and one player is ahead 2 to 1 when the game is interrupted, Fermat reasoned there would be four possible outcomes had the game continued. Three of those four favor the player with the edge; ergo, he should win three-fourths of the pot. A sticking point is a counter-argument using a different scheme of counting that only finds three possible outcomes instead of four.

Pascal’s approach sidestepped this issue by devising an algorithm employing what is now known as induction and incursion. It involves a logical cycle of playing out each possible outcome for each successive round, starting from the point where the game was interrupted. Once the end state is reached, it is then possible to work backward through the intermediate steps and assign a number to the probability of winning for each player at the point when the game was interrupted, and the pot would be divided accordingly.

Pascal’s analysis stopped short of considering less idealized situations where a finite number of equally likely possible outcomes could not be listed, such as the weather, or the stock market. By the early 18th century, Jakob Bernoulli had devised the law of large numbers in an attempt to provide a formal proof that uncertainty decreases as the sample size increases for problems with an infinite number of outcomes. Other developments by leading scientists and mathematicians followed, ultimately transforming economics, actuarial science, and the social sciences.

A few weeks after his last correspondence with Fermat, Pascal narrowly escaped death when his carriage nearly ran off a bridge, prompting a religious conversion. He switched his focus from math and science to philosophical and religious treatises, and renounced games of chance. He did an occasional bit of math: between 1658 and 1659 he explored the cycloid and how it might be used to calculate the volume of solids, for example.

His early work on probability seeped into his philosophical work as well, most notably the famous “Pascal’s Wager,” wherein he reasoned that the odds favor belief in God, even though God’s existence cannot be definitively proven. Pascal died of a brain hemorrhage on August 19, 1662, just before his 39th birthday. History has yet to record the outcome of his wager.

This article appeared in the July 2009 issue of APS News.