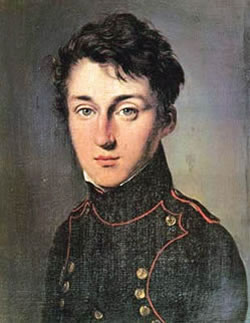 Nicolas Léonard Sadi Carnot (1796-1832) in the dress uniform of a student of the École Polytechnique.

Born in 1796, Carnot was the son of a French aristocrat named Lazare Carnot. His father was one of the most powerful men in France prior to Napoléon’s ignominious defeat; the family fortunes rose and fell dramatically throughout the young Sadi’s life in conjunction with that of the monarchy. Named for the Persian poet Sadi of Shiraz, Carnot learned mathematics, science, language, and music under his father’s strict tutelage. At 16, he entered the École Polytechnique, studying under the likes of Claude-Louis Navier, Siméon Denis Poisson, and André-Marie Ampère.

Following graduation, Carnot took a two-year course in military engineering in Metz, just before Napoléon’s brief return from exile in 1815. When Napoléon was defeated in October of that year, Carnot’s father was exiled to Germany. He never returned to France. Carnot the younger, dissatisfied with the poor prospects offered by his military career, eventually joined the General Staff Corps in Paris and pursued his academic interests on the side.

In 1821, he visited his exiled father and brother, Hippolyte, in Germany, where many discussions of steam engines took place. Steam power was already used for draining mines, forging iron, grinding grain, and weaving cloth, but the French-designed engines were not as efficient as those designed by the British. Convinced that England’s superior technology in this area had contributed to Napoleon’s downfall and the loss of his family’s prestige and fortune, Sadi Carnot threw himself into developing a robust theory for steam engines.

Although the steam engine was fairly well developed by this time, the efficiency of those early engines was as low as 3%. Engineers were experimenting fervently with other mechanical means and fuels for improving that efficiency. Furthermore, there had been very little work delineating the underlying science by which it operates. The principle of energy conservation was fairly new and quite controversial among scientists at the time. It would be another 20 years before someone uncovered the mechanical equivalent of heat. When Carnot began his studies, he and his peers subscribed to the caloric theory, assuming that heat was a weightless, invisible fluid that flowed when it was not in equilibrium.

Carnot’s father died in 1823. That same year, Carnot wrote a paper attempting to find a mathematical expression for the work produced by one kilogram of steam; it was never published. In fact, the manuscript was not discovered until 1966. He then tackled the two fundamental questions concerning steam engines of his day: (1) whether there was an upper limit to the power of heat, and (2) whether there was a better fuel than steam capable of producing that kind of power.

In 1824 he published Reflections on the Motive Power of Fire, which described a theoretical “heat engine” that produced the maximum amount of work for a given amount of heat energy put into the system. Carnot abstracted what he considered to be the critical components of the steam engine into an ideal theoretical model. The so-called Carnot cycle draws energy from temperature differences between a “hot” and “cold” reservoir. Although a theoretical construct, later in the century Carnot’s ideas inspired Rudolf Diesel to design an engine with a much higher temperature in the hotter of the two reservoirs, resulting in far greater efficiency.

Carnot knew from endless experimentation that in practice, his design would always lose a small amount of energy to friction, noise and vibration, among other factors. He knew that in order to approach the maximum efficiency in a heat engine, it would be necessary to minimize the accompanying heat losses that occurred from the conduction of heat between bodies of different temperatures. He also knew no real-world engine could achieve that perfect efficiency. As such, he came tantalizingly close to discovering the second law of thermodynamics.

As for the question of which substance yielded the highest amount of work, Carnot engaged in a discussion of the relative merits of air versus steam for what he termed the “working fluid,” but concluded that the maximum efficiency of an ideal heat engine did not depend on the working fluid. As he noted, “The motive power of heat is independent of the agents employed to realize it; its quantity is fixed solely by the temperatures of the bodies between which it is effected, finally, the transfer of caloric.” That is, the efficiency of the “Carnot engine” depends only on the temperature difference within the engine.

Reflections on the Motive Power of Fire did not attract much attention when it first appeared, only beginning to gain notice a few years after Carnot’s untimely death from cholera at the age of 36, among the myriad of casualties of the epidemic that swept through Paris in 1832. Most of his belongings and writings were buried with him, as a precautionary measure to prevent the further spread of the disease.

Described by contemporaries as “sensitive and perceptive,” but also “introverted” and “aloof,” Carnot was at least 20 years ahead of his time. In the short term, his work did not immediately lead to more efficient steam engines, or any other practical application. His lasting contribution was to set out the physical boundaries so precisely that Rudolf Clausius and William Thomson (Lord Kelvin) would draw on his work to build the foundations of modern thermodynamics in the 1840s and 1850s.