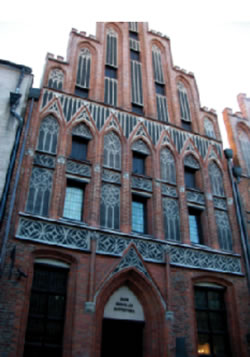 House in Toruń, Poland, where Nicolaus Copernicus was born in 1473

On November 20, 2008, Polish newspapers published an interesting report from Sweden: The remains of the 16th century Polish astronomer and author of the heliocentric cosmology, Nicolaus Copernicus, have finally been identified.

The news quickly spread around the world. But is the conclusion believable? Is there scientifically valid evidence to back it up?

Since 2004, a group of experts under the guidance of Professor Jerzy Gąssowski from the university in Pułtusk, Poland, has been trying to locate Copernicus’ burial place. It has been commonly known that the astronomer was buried inside the cathedral in Frombork, Poland, where he had served as a canon for decades until his death in 1543. The exact place of his burial, however, was never marked.

Finally, after years of searching, archeologists discovered the remains of a man who was 70 years old, the same age as Copernicus upon his death. Modern technology allowed the reconstruction of the man’s portrait, which, however, is of questionable value because no original pictures of Copernicus have survived.

In order to verify the discovery, Polish archeologists have tried to find remains of the Copernicus family and compare DNA samples with those recently found in Frombork with one purpose: once and for all, to confirm that the recently found remains were those of the famous scientist. Unfortunately the known Copernicus genealogy tree ended in the 17th century, and the search for a DNA donor has yet to yield any results.

In 2006, Professor Gąssowski gave a lecture in Sweden announcing the possible discovery of the remains of Copernicus. Professor Goeran Henriksson of Uppsala decided to look for other artifacts linked to Copernicus. In the library of the University of Uppsala resided a book of astronomical tables by Johannes Stöffler that had belonged to Copernicus but that had been carried off to Sweden in 1626. Miraculously, inside the book he found a hair. With the help of his collaborators, Henriksson ended up finding 10 hairs. One was glued to the cover of the book and belonged to the book’s binder, though proof of how this connection was made is as yet unavailable.

The report from Sweden, as well as many interviews given to the media, state that the DNA of the remains found in the Frombork cathedral match the DNA of two of the found hairs. This match is the source of Professor Henriksson’s conclusion that the remains are those of Copernicus. How Henriksson arrived at the conclusion from a scientific point of view, however, isn’t clear. Indeed, there are many questions to be answered to confirm the finding:

How is it possible that during hundreds of years and conservation procedures applied to the Stöffler book, the hairs were never found before, or lost in the process? And most of all, what is the proof that the hairs found in the book are indeed those of Copernicus?

At this point, the only reliable conclusion is that the DNA of the hairs and of the remains found in Frombork match–nothing more. This means that from a scientific point of view the status of the identification process of the remains is still the same as it was in 2005, except that emotions are now playing an important role.

I will believe that these are indeed Copernicus’ remains only if I am able to read a reliable scientific report on the comparison of the DNA of the found remains, DNA of the material found in the book in Uppsala, and the DNA samples of a family member of Copernicus. Since up to now I have been unable to have any access to such documentation, my opinion about the case is suspended. At the same time, the noisy press conferences and perpetuation of unverified information in the media are not a proof for me that the remains found in Frombork are indeed of Copernicus.

The scientific background of this opinion, together with the explanation of many other mysteries and still unknown facts of Copernicus’ work and life, are presented by Professor Kokowski in his book.

Thus, is it not too early to discuss what kind of gravestone to prepare for the second funeral of Copernicus? As one also born in Toruń, I believe that for now, while waiting for reliable scientific identification of the remains found in Frombork, it is better to celebrate his birthday.

A celebration of Copernicus’ birthday on February 19th of this year in Toruń inaugurated the Polish contribution to the Astronomy Year 2009 proclaimed by UNESCO.

Lidia Smentek is a member of the Executive Committee of the APS Forum on International Physics, and Adjoint Professor of Chemistry at Vanderbilt University.