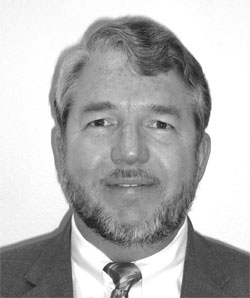 One of the world’s largest biotechnology companies is a physics fan. Amgen, headquartered in Thousand Oaks, CA, develops medicines that treat various ailments such as kidney disease and congestive heart failure based on advances in recombinant DNA and molecular biology. Life scientists flock to Amgen for the chance to work in an intellectually rigorous organization that values both science and patients. But there is also a cadre of physicists and mathematicians who serve the firm as well, performing on-call assignments as needed throughout the corporation. This group exists to solve literally any math problem that Amgen faces, be it related to drug discovery or supply chain management.

Steve Johnson, who has degrees in physics, math and computer science, works for this mathematics consulting group where he and his eight other colleagues use advanced mathematical and physics techniques to analyze, model, optimize and solve significant technical and business problems that face the company. He gets to apply his physics knowledge every day, and he loves it.

Johnson, 52, has been employed by Amgen since 2003 in a variety of capacities. Today he is the Senior Manager in Amgen’s Research and Development Systems Informatics group, part of the larger Information Systems organization. His projects involve not only solving mathematical problems, but also translating and converting innovative mathematical approaches into viable business solutions for Amgen. His work with clinical, operations and medical affairs leaders is part of the group’s focus on problems relating to drug structure, drug metabolism, manufacturing processes, and logistics. He also travels a lot, especially to Europe, where he has addressed various regulatory and compliance issues pertaining to Amgen’s products from a mathematical point of view.

Amgen encourages its scientists to move throughout the company and pursue different positions. This is a perk for Johnson who says that “every three or four years I get antsy and want to move to do something else.” His previous assignment before Systems Informatics was in commercial operations in support of the Amgen nephrology business unit. It was a marketing-related assignment, although he still solved math problems. In this case, he collected, managed, and reported on data for all the dialysis patients in the United States in an effort to gain insights into that patient population. This medical-marketing job involved partnering with Amgen’s business units, such as Strategy and Operations, Legal and Compliance, and National Accounts, and applying his results to new brands and market segments throughout the world.

In the biotech industry and at Amgen in particular, Johnson says, physicists, mathematicians and engineers have significant opportunities. In addition to his research position he also serves as a technical recruiter for the Information Systems organization and “we specifically look for people with engineering and science backgrounds, not just computer science or programming,” he says. “We look for and actively recruit people with physics backgrounds.”

Johnson holds a BS in physics and mathematics from DePaul University and a MS in Computer and Information Science from Ohio State University (OSU). His thesis for his master’s focused on building a hybrid computer system for a hexapod vehicle in a biomedical engineering lab at OSU.

He describes his entrée into biotech as a “random walk”, although “there were some things I knew I wanted to do and some things I knew I enjoyed,” he says. His early academic focus on instrumentation led to a job in telecommunications at Bell Labs in Columbus, OH. But after six months he found himself “bored out of my skull,” he confesses, and he soon departed. Reminiscing, he realizes that the highlight of his time there was having conversations with physicists Robert Wilson and Arno Penzias who shared the Nobel Prize in 1978 for the discovery of cosmic microwave background radiation, adding to the evidence for the Big Bang.

It was Johnson’s interactions with his roommate while at Bell Labs that led him to have his own “Big Bang” moment and rapidly propelled him toward a career in biotechnology. The roommate worked for the Anesthesia Department at the OSU medical school and was doing systems design for medical devices. “As I was coming home more and more disillusioned, he was coming home more and more enthusiastic and cheerful and engaged with what he was doing,” Johnson recalls.

Johnson applied for and secured a job in the Anesthesia Department as well, where he helped develop an intra-operative anesthesia monitoring system. Johnson’s team applied their knowledge of hardware and software design to construct a uniform user interface for the machines used by anesthesiologists during surgery.  Prior to this, anesthesiologists had a significant problem: every operating room in which they worked had different machines used to monitor life signs and other vital information. These devices were often from different manufacturers and did not communicate information the same way.  So every time the anesthesiologist went into a different operating room, it would take a few moments to acclimate to the new machines. That time wasted could be the difference between life and death for a patient. The innovative intra-operative anesthesia monitoring system Johnson helped create could be applied to any machine used during anesthesia to ensure that important patient information (such as heart rate) was organized and displayed in a consistent manner that was useful for the anesthesiologist.

Johnson’s three years at the hospital solidified his interest in working in the life sciences. “I had a wonderful time,” he says. “It was extremely engaging and I could immediately see the benefits to patients.” Furthermore, Johnson realized “that there was an incredible amount of leverage that scientists and technologists could have in the medical field,” and he was certain that he could contribute. He easily transitioned into industry, where, prior to Amgen, he held positions at Siemens Medical Systems, SPX Corporation, and Pfizer, Inc. His work involved bioinformatics, embedded systems, sales, project management, and intellectual property coordination, among many other tasks.

Johnson considered a career in academia, but only for “half a second,” he jokes. In industry, “there is the ability to see things with a tangible result within a reasonably short timeframe,” he explains. “A product development lifecycle is something that fits comfortably with my mindset.” Furthermore, “I like the idea of building something that people will use and will benefit [from],”he continues. “Knowing that something I design is valued by patients is very satisfying to me.”

At Amgen, the Systems Informatics group employs various mathematical techniques to complete assignments, such as category theory, set theory, Petri Nets, ODEs and PDEs, computational fluid dynamics, and signal processing. In addition to his technical skills, Johnson also relies heavily on other talents he mastered from studying physics as well. He stresses that the act of preparing his thesis groomed him for success in public speaking, dealing with bureaucracy, the art of persuasion, and “the intensity of work and writing that is absolutely necessary” in his industry.

For those interested in employment in biotechnology, Johnson reveals his secret tip for finding a job. Networking helps, he says, but if you have a particular area of interest, such as medical devices, do a patent search and find the names of the people and companies that are associated with the intellectual property. Those are the professionals you should contact first, he advises.

Johnson is not sure where his “random walk” will take him next, but for now he is certain Amgen is the company for him. He appreciates his job because of the global view it gives him of the drug development enterprise. “I have a perspective of what goes on at Amgen that is fairly broad and fairly deep because the problems [we solve] are very significant,” he explains. “It’s really fun to have this holistic vision of this huge business and know there is the potential benefit of helping patients.”