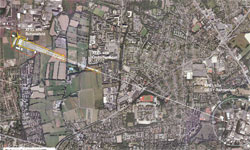 Ever since their discovery at the end of the 19th century, x-rays have contributed immensely to our understanding of the structure of matter at the atomic level, from the discovery of diffraction by crystals to the unveiling of the double-helix structure of DNA. In the last few decades, novel perspectives have been open to the application of x-rays in physics, chemistry, materials science and biology by synchrotron radiation sources. The key figure of merit of many x-ray experiments is the brilliance (or spectral brightness), which is enhanced by up to nine or ten orders of magnitude when comparing a modern large circular accelerator with a conventional laboratory source. A new kind of accelerator-based x-ray source is about to become available to the scientific community, which promises a similarly huge jump in brilliance.

A number of projects worldwide are pursuing the realization of a source of extremely brilliant (peak brilliance ~ 1033 photons/s /mm2/ mrad2/0.1%BW), ultra-short (~ 100 fs) pulses of spatially coherent x-rays with wavelengths down to 0.1 nm, and to exploit them for revolutionary scientific experiments in a variety of disciplines. In particular, the short duration of the pulses, and their high intensity, should enable researchers to obtain structural information with atomic resolution on the time scale of relevance for vibrational relaxation, molecular rearrangement during chemical reactions, and so on; it is also envisaged to use coherent diffraction on single objects (e.g. cells, viruses, or even large macromolecules) to obtain structural information without the need for crystallization; the high intensity delivered by the beam to a target will also be exploited to create states of matter, characterized by a high energy-density, which are not easily obtained on earth.

These facilities are based on linear electron accelerators, and use the “SASE” (for Self-Amplified Spontaneous Emission) process for the generation of coherent radiation. In the US, the Linac Coherent Light Source (LCLS) at SLAC, Stanford, is due to produce its first beam later this year; in Japan, the SCSS (Spring-8 Compact SASE Source) is scheduled to come into operation in 2011. These two projects are being developed based on room-temperature linear accelerators (linacs); in the case of LCLS it is the SLAC linac, or, more precisely, the final one-third of the linac's length. The facility uses the superconducting linear accelerator technology developed at DESY within the TESLA collaboration, and successfully applied to produce laser-like radiation down to 6.5 nm wavelength at the FLASH facility at DESY (the first short-wavelength free-electron laser to operate for users). The most important advantage of the superconducting technology is the possibility to fill each RF pulse with a large number of electron bunches: in the European X-Ray Free Electron Laser (XFEL), up to 3,000 in each of the 10 RF pulses per second; there are 50 in each of 60 RF pulses for the Japanese project and one or a few for the LCLS, with 120 RF pulses. The European Facility will therefore produce up to 30,000 x-ray pulses per second, instead of the 3,000 or 120 foreseen in the Japanese and American projects, respectively.

In the European facility, electron bunches, accelerated to 17.5 GeV in a ~ 1.7 km long Linac, will pass through long (up to 200 m) undulators. Commissioning with first beam of the facility is expected to take place in 2014. An initial contingent of 3 photon beamlines with 6 experimental stations (later to be upgraded to 5 photon beamlines and 10 experimental stations) is planned, where experiments exploiting the high intensity, the coherence and the time structure of the new source are going to be performed.

In early January, construction work started simultaneously at three distinct sites: inside the DESY campus, where the injector building is going to be located; about 1.5 km northwest of there, where the linac ends and a “switching station” will be placed, to deliver the electron bunches to one or the other of the three initially foreseen undulators; and finally some 3.4 km from the injector, where the experimental hall is going to be located, not far from the village of Schenefeld.

The construction and operation of the facility is going to be entrusted to a non-profit limited-liability company, European XFEL GmbH, along with research institutions of 13 European countries (Denmark, France, Germany, Greece, Hungary, Italy, Poland, Russia, Slovakia, Spain, Sweden, Switzerland, and UK) plus China, as shareholders. This is the well-tested organizational model of the ESRF (European Synchrotron Radiation Facility) in Grenoble and other internationally funded research institutions in Europe. The involved countries agreed, with a Memorandum of Understanding, to proceed to the preparation of the official foundation of the company, which is expected for later this year, after signature of an inter-governmental convention by the representatives of the 14 participating countries.

In the meantime, a project team has been assembled, and civil engineering work started, thanks to financial support mostly from Germany, but also from the European Union and by the Swedish, Slovakian and Spanish partners. When the company reaches its full personnel complement, it will employ over 230 people; most tasks related to linear accelerator construction and operation are going to be contracted to a consortium of laboratories coordinated by DESY.

Massimo Altarelli is the Project Team Leader for the European XFEL.