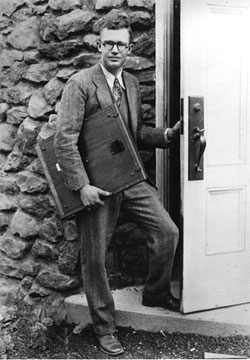 In early 1930, Pluto was discovered by a farm boy from Kansas with no formal training in astronomy. The announcement in March of Pluto’s discovery was a moment of excitement for both scientists and the public.

Clyde Tombaugh was born on February 4, 1906 in Illinois, and grew up on a farm in Kansas. He became interested in astronomy as a teenager after observing craters on the moon and rings around Saturn through his uncle’s three inch telescope. The family soon ordered a better telescope to encourage their son’s interests. When he was 20, Clyde Tombaugh began building his own telescopes.

By 1928 Tombaugh had built his third backyard telescope and used it to make drawings of Mars and Jupiter. He sent these to Vesto M. Slipher, the director of the Lowell Observatory in Flagstaff, Arizona, asking for comments. After a short correspondence, Slipher offered him a job at the observatory. His task would be to search for “Planet X.”

Planet X had been predicted by Percival Lowell. Lowell, a businessman and astronomer known for his belief that a network of canals existed on Mars and was evidence of an intelligent alien civilization, built the Lowell Observatory to prove his theory. But as it became more and more clear that there was no evidence for that theory, he began to focus on searching for a new planet. Lowell had observed some peculiarity in the orbits of Neptune and Uranus and figured there must be another planet with a mass comparable to Neptune’s orbiting the sun beyond Neptune. Lowell searched for the planet, which he called Planet X, from 1905 to his death in 1916.

For years after Lowell’s death, the Lowell observatory was hampered by an expensive legal battle with Lowell’s widow. In 1927 the observatory was ready to resume the search for Planet X, and it acquired a new 13 inch refracting telescope for the search.

Slipher assigned the task to Tombaugh, who arrived in Flagstaff in January 1929. First, he had to use the telescope to make many photographic plates, systematically taking pictures of regions of the night sky where the new planet might appear. For each region, Tombaugh made two photos, taken several days apart. He spent many cold nights in the unheated observatory dome carefully making the observations.

After creating many such pairs of plates, he would compare the two members of each pair. Distant stars would appear in the same position on both plates, but a planet would have moved in the several days between the two exposures. Tombaugh used a device called a blinking comparator to make the comparison. The device would present him with sections of the two photo plates to be compared, shifting between the two several times a second. Most of the time the photos were the same and Tombaugh would see nothing, but if an object had moved between the two exposures, Tombaugh would see a blink.

It was incredibly tedious work requiring intense concentration, but Tombaugh greatly preferred it to going back to work on the farm, so he persisted.

After months of searching, he had found several asteroids, but nothing that fit the criteria for Planet X. Finally, in February 1930, while scanning the plates he had taken a few weeks earlier, he saw something that moved. He determined that the object had moved about 3 mm on the plates between the two exposures, indicating an orbital distance of about 40-43 AU, putting it outside the orbit of Neptune at about the right place to be the predicted planet.

Tombaugh told Slipher he had found Planet X, and on March 13, 1930, the Observatory announced the finding of the new object. The announcement date was chosen to coincide with both the anniversary of Herschel’s discovery of Uranus in 1781 and Percival Lowell’s birthday in 1855.

The public and astronomers were enthusiastic about the new planet. Later that month the object was officially named Pluto, after the Roman god of the underworld, who could make himself invisible. The name was suggested by an 11 year old girl in England. A secondary reason for the name was that the first two letters are Percival Lowell’s initials.

Though exciting, the planet was tiny, just a dot on the photograph, and some astronomers doubted whether it was massive enough to affect the orbit of Uranus and Neptune.

Pluto’s mass was not known until 1978, when its moon Charon was discovered. Pluto’s mass is about 0.002 that of Earth, making it much too small to influence the orbit of Neptune.

Ultimately, Pluto lost its planet status. Other objects in the neighborhood of Pluto have been discovered in recent years, including several comparable in size to Pluto. In 2006, much to the disappointment of children around the world, the International Astronomical Union redefined the term “planet.” The new definition of a planet requires an object to orbit a star, be large enough to be made round by gravity, and have cleared its orbit of other debris. The third criterion disqualifies Pluto, which is now known as a dwarf planet.

After the discovery of Pluto, Tombaugh received a scholarship to study astronomy at the University of Kansas. He began as a freshman in 1932 and continued to work in astronomy for many years. Tombaugh was later known as one of only a few scientists to take UFOs seriously. He died in 1997, mercifully before the demotion of his planet to the status of a dwarf.