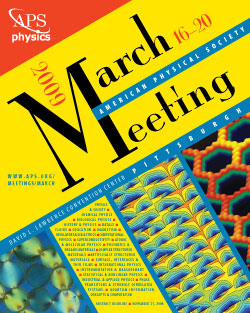 By APS Staff/LP
The APS March Meeting, the largest physics meeting of the year, will take place March 16-20, 2009 in Pittsburgh at the David L. Lawrence Convention Center. Scientists from around the world will present more than 7,000 papers on the latest research in condensed matter physics, new materials, chemical and biological physics, fluids, polymers, and computational physics. A number of sessions will also address the role of physics in society, such as its relevance to education in developing nations, the quantitative study of paintings, the greening of the city of Pittsburgh, and climate change mitigation.

Some special sessions to be held at the meeting include a session on Energy and the Environment on Monday evening and special evening symposium Wednesday on Windows on our Universe: Breakthroughs in Observational Cosmology.
Graphene Stays Hot
More than two dozen sessions are devoted to the study of graphene, a two-dimensional form of carbon. Session A1 looks at how graphene properties can be tweaked to produce novel effects and possible applications in micro-circuitry. Changing the substrate on which the graphene sits or the triggering of small terraces in a graphene sheet are methods for tuning graphene behavior. Other sessions feature new experimental results (B1), electronic behavior (H1), and electron trajectories in graphene (J1).

Iron-Arsenic Superconductors
These new materials–the first superconductors above a temperature of 50 Kelvin not made from copper-oxide planes–have made a big splash over the past year. Last year’s meeting featured no session on this topic; this year; a dozen sessions. Topics include the possible ways in which electrons pair up on the Fe-based materials, summaries of how the materials are made, electronic properties, theoretical explanations, and the manifestation of the Josephson effect and other superconducting phenomena.

Cheap, Bendy Photodetectors
Xiong Gong and his colleagues at the University of California, Santa Barbara and CBrite Inc. have developed prototypes of low-cost flexible photodetectors that are sensitive to infrared, visible, and ultraviolet light in the wavelength range of 300 to 1450 nanometers. The photodetectors are made with semiconducting polymers that work much like common commercial silicon-based photodetectors by converting light into electrical signals. They are at least as sensitive as silicon photodetectors, says Gong, and they have the advantage of covering a very broad spectral range as well as being flexible and much cheaper to produce. The potential commercial applications include image sensing, communications, chemical, biological, and environmental monitoring, remote control, night-time surveillance, and military applications. Gong predicts that the technology will be commercially available in less than five years. (H20.10)

Nano-Tool Box
If you want to build tiny things, it’s handy to have some tiny tools. Abha Misra and colleagues at Caltech are shaping carbon nanotubes into minuscule soldering irons. The researchers used electron beams to carve the world’s smallest soldering tips from iron-filled nanotubes, and demonstrated their tiny tool by soldering other carbon nanotubes together. Ultimately, the nano-soldering iron should be ideal for linking together molecular-scale mechanical and electronic devices (J24.2). Keith Brown of Harvard will present an innovative proposal to move components with the sharp tip of an Atomic Force Microscope (AFM). In order to prevent nano-objects from sticking to the AFM tips, Brown and his fellow researchers are looking to a method that permits them to hold objects without actually touching them. Applying a radio frequency signal to specially-designed AFM tips allows them to capture small objects while keeping them a small distance away from the AFM tip (V27.2). Andreas Huber of the Max Planck Institute for Biochemistry will describe an imaging system that provides nanometer resolution and is particularly well suited to analyzing superconductors, semiconductor devices and even individual molecules. The new nanoscope relies on terahertz (THz) light. Imaging devices usually can’t resolve structures smaller than the wavelength of the light they are using, but Huber and colleagues have managed to image objects with resolutions 3000 times smaller than the wavelength of terahertz light, setting a new record for sub-wavelength resolution (P27.13).

A Touching Technique For Identifying Cancer Cells
Distinguishing between healthy cells and cancerous ones is often an inexact science, traditionally relying on visual identification, analysis of cell growth, or genetic tests, among other techniques. Researchers at Clarkson University and the University of Australia have now found that they can tell the difference between normal and cancerous cells through touch. The group used an atomic force microscope (AFM) to study the adhesion of silica beads to malignant and normal cells cultured from the human cervix. They found that analyzing the relative stickiness of cells is a good way to tell cells apart, potentially taking the guesswork out of cell identification and leading to a quicker and more reliable method of cancer diagnosis. Igor Sokolov of Clarkson University will present the study of their novel detection technique (V27.4).

Hybrid Protein-Nanoparticle Memory Unit
Researchers in Israel have developed a novel memory unit that combines a ring-shaped protein molecule 11 nanometers in diameter with a 5 nanometer particle of silicon. The structure can be electrically charged to store a single bit of information. The achievement is an example of a promising bottom-up approach to building nanoscopic electronics, rather than the top-down technique of carving devices out of silicon, which is getting increasingly challenging as technology moves to ever smaller scales. (A28.11)

To Crack, Or Not To Crack
A brittle material fails because cracks form and ruin its structural integrity. This is one of the most basic tenets of material physics, but the propagation of cracks has never been well understood. A new theoretical and experimental analysis offers valuable insights into how a material will fare over time. Materials break around the weakest points, which are usually impurities or defects in the object’s molecular structure. Up to now, it has been very difficult to predict how different stresses would cause these defects to crack and fail. Caltech physicist Laurent Ponson’s new model describes how a material’s natural impurities affect its long term durability. It has been well known for years that some material impurities can actually increase an object’s life by deflecting cracks, but this new model quantifies the process. This will give engineers a powerful tool for predicting how brittle substances like clay or glass hold up over their lifetimes. (W9.1)

Supersolids
In 2004 Penn State physicist Moses Chan presented preliminary evidence of superfluid behavior in a sample of solid helium. This evidence consisted of the sample, or least part of the sample, remaining stationary even when its container was given a quick twist. Since then the experimental observations of Chan have been confirmed in at least six other laboratories. However, the exact physical mechanisms responsible for the observation are still unclear. What is clear is that superfluidity in solid helium is quite different from that in liquid helium.  (W1 and V16)

A Polymer That Beats Like A Heart
The overall function of certain biological tissues like the heart emerges from the fact that its cells can join together in coordinated movements like a heartbeat in response to a triggering signal. Now this ability has inspired researchers to design polymer materials that can do the same sort of thing. Anna Balazs of the University of Pittsburgh will describe her research on one such material: a polymer gel that’s sensitive to pressure and beats like a heart when touched. The gel contains a metal catalyst, and touching it in one spot induces a cyclic chemical reaction that spreads over the entire material and causes the whole gel to vibrate. Balazs has developed the first computational model describing the microscopic shape changes that occur in these touch-sensitive gels. Balazs and her group have also designed polymeric materials that vibrate in response to light and will actually wiggle away from a light source when exposed to it. The overall goal of the research, she says, is to impart lifelike functions, such as the sensitivity to touch, to inanimate objects. Touch-sensitive robots and damage sensors on airplanes and other vehicles are some of the more obvious applications. (X4.1)

Titanium Dioxide Kills Skin Cells
Titanium dioxide is a common pigment used in everything from paint to sunscreen–even breath mints–but despite its ubiquity in commercial products, its safety may be a cause for concern, according to Miriam Rafailovich and her colleagues at Stony Brook University. The problem, she says, is that titanium dioxide produces peroxide and other chemicals that can damage cells when it is exposed to UV light. Using cultures of a common type of skin cell known as “dermal fibroblasts,” Rafailovich and her colleagues showed how titanium dioxide can damage the cells’ DNA and lead to cell death. They also showed that coating the particles with electrically active polymers can protect the cells from damage. (J40.7)

Physics And Culture
Speakers in sessions Q3 and W5 examine the ways physics relates to a variety of artistic ventures, from the paintings of Van Gogh, Monet, and Pollock, to the architecture of medieval Islam and contemporary China (such as the Olympic Water Cube in Beijing), to the overlap of science, scientists, and the making of movies in Hollywood.

10,000 Physics Majors
Right now, only about 1.4% of STEM graduates are in physics.  Both the American Physical Society and the American Association of Physics Teachers (AAPT) have issued statements calling for doubling the number of undergraduate physics majors in this country. (Roughly 5,700 physics baccalaureate degrees are presented annually.) Theodore Hodapp, APS director of education and diversity, will present the rationale for having 10,000 physics majors. A main reason is that an education in physics prepares a student for tackling many of the large technical issues facing society. (B3.1)

Periodic Table For Quantum Dots
A quantum dot is a tiny speck of semiconducting material in which electrons are confined to an essentially zero-dimensional point. A lone electron, freed from an atom in the dot by laser light, along with the migrating vacancy left behind, form a composite object called an exciton. That exciton within the confines of the dot constitutes an artificial hydrogen atom, with a unique energy spectrum of its own. Maneuver to have two such excitons in the dot and you have an artificial helium atom. McGill University physicist Patanjali Kambhampati will report on the first detailed studies of a “helium” quantum dot. Artificial “lithium” and indeed many other atoms seem to be in the offing.  (H10.2)

Quartz-Like CO2
Pressures of 100 GPa, equivalent to a million times atmospheric pressure, are comparable to the chemical strengths of solids made of molecules, such as H2, CO2, and N2. Much higher pressures than that can be brought to bear on materials, either through static methods, such as with diamond anvil cells, where pressures can reach 360 GPa, or dynamic methods, such as with laser pulses or explosions that can reach pressures over a trillion Pascal (TPa). Choong-Shik Yoo, a scientist at Washington State University, will discuss TPa chemistry and will report on specific molecular-to-nonmolecular transitions observed in his lab under high pressure.Examples include quartz-like and silica-like forms of carbon dioxide.  (P13.4)