Finding Sanctuary in Faith and Physics 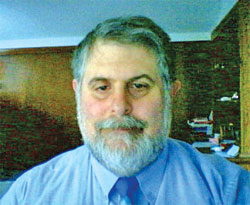 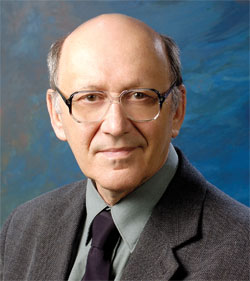 A Priest and a Rabbi walk into a physics lab. It could be the start of a joke, but in this case it’s the premise of the lives of Michal Heller, a Catholic priest, and Ronald B. Kopelman, a rabbi, both of whom also happen to be physicists.

Drawn to science as youngsters, Reverend Heller, 72, and Rabbi Kopelman, 56, both see religion and science as inherently connected. “Science gives us knowledge, and religion gives us meaning,” says Heller. And as Kopelman puts it: “Science asks how and religion asks why…they deal with two sides of the same coin.”

The two clergymen completed their physics and religious training in reverse order–Kopelman worked as a physicist for almost 15 years and then became a rabbi, whereas Heller went to Seminary in his teens and studied physics following his ordination as a priest.

Rabbi Kopelman received his PhD in physics, in the area of critical point phenomena in gas and liquid transformations, from the University of Maryland. He went straight into an industrial physics career, but had always been very interested in Judaism. Having been raised in an Orthodox Jewish household in Detroit, he had first contemplated becoming a rabbi in his younger days, although he ultimately chose to first pursue a career in science.

Kopelman had been attracted to physics because he was magnetized by measurements. “I was always excited at the thought of doing a measurement, of finding a number,” he explains. “I liked the challenge of doing an experiment and getting a number with greater accuracy than anyone else had done before.”

His career transition from physicist to spiritual leader began in 1990, although Kopelman says it was “a midlife crisis 20 years in the making.” At that time, at the age of 41, he was working for NASA in Cleveland while his family lived in Utica, NY. Every weekend, he drove the three hours home and during the long drives he found himself thinking more and more about Judaism. He started reading books on the subject and learning Hebrew, and before he knew it, he realized he needed formal training to go further with his studies. “What started out as an avocation turned into a full-time pursuit,” he says. He quit his job, enrolled in the Jewish Theological Seminary in New York City, and seven years later, emerged as a rabbi.

His first pulpit out of seminary was at a synagogue in Bowie, MD. Looking back, Rabbi Kopelman asserts that he would not have done his training any other way. “What I am today is a reflection of both worlds and I wouldn’t give either one up,” he says. In fact, “I wish I could have spent a whole lifetime doing both.”

Reverend Heller feels the same way. He was excited by science as a child, and says “my dream from the very beginning was to study the sciences. It was quite natural.” And yet he knew “religion was something that was absolutely necessary (to be part of)”.

“I was too ambitious,” Heller admits, “I always wanted to do the most important things, and what can be more important than science and religion?” By the time he was in his teens, he knew he would pursue both. However, growing up in Poland at the end of World War II, and then under a communist regime, he knew getting a degree in physics was not a simple option. He chose the priesthood first. After graduating from seminary and being ordained, he went to study physics at Catholic University in Lublin, which at the time was the only university in Poland at which a priest could study openly.

Although there was no physics department at the institution, Heller was still able to take physics and mathematics courses. By 1966, he had graduated with a master’s and a PhD in “philosophy of nature”, with a thesis in relativistic cosmology. Since then he has served in academic positions in physics and astrophysics at universities throughout Europe, and has conducted astronomical research at the Vatican Observatory in Castel Gandolfo, Italy, among other places. He has also written several books with titles such as Some Mathematical Physics for Philosophers, The New Physics and a New Theology, and Theoretical Foundations of Cosmology–Introduction to the Global Structure of Space-Time.

Both the rabbi and the priest see connections and parallels between religion and science. “Religion permeates everything,” Heller says, and “science concerns everything.” He believes that everything was created by God, and through science, “we figure out how God did it.”

The rabbi distinguishes many places where science and Judaism, in particular, cross. For example, when someone creates a new material, Kopelman ponders whether one can make a kosher dish out of that material. “You’re taking very ancient laws that people know well but applying them in uncharted regions,” he says. “It’s the same thing when a new species is discovered; you have to determine if it is kosher. You have to ask: can you take the text that’s there and adapt it to new situations?”

Rabbi Kopelman notices that “you find very much the same thing in the lab.” “You know what the technology is,” he explains. “Can you take that technology and adapt it to find a new and better measurement? In a way both challenges are the same thing–you are looking at a specific question and you’re trying to see it in a new and novel way.”

Neither Heller nor Kopelman sees a conflict between religion and physics. Says the Rabbi:  “I have come to the conclusion that if Torah and science seem to be in conflict, then you’re not posing the question the right way. At no time should the two of those be in conflict. My scientific background lets me step back and see how these two could not be in conflict.”

Heller agrees. “(Science and religion) both are prerequisites of the decent existence,” he says. “The paradox is that these two great values seem often to be in conflict. I am frequently asked how I could reconcile them with each other. When such a question is posed by a scientist or a philosopher, I invariably wonder how educated people could be so blind not to see that science does nothing else but explores God’s creation.”

Rabbi Kopelman jokingly says he “hopes” that having studied physics has made him a better spiritual leader. “It has allowed me to see my religion and what goes on in the Bible in unique ways that other rabbis don’t see,” he states. Furthermore, “it gives me another tool in my arsenal for studying Torah and our traditions and understanding them.”

For example, since he finds joy in physics and religion, and is still charmed by measurements, his unique background allows him to examine certain portions of the Torah, such as the 10 plagues, for its scientific relevance. “The ninth plague is darkness,” he notes, and “I as a physicist start thinking: can I find a solar eclipse that’s complete over the land of Egypt in certain centuries that come at a certain time of the year? If I find that then I can date the Exodus.” But he is quick to clarify that the majority of his teachings as a rabbi rely on his and his congregants’ faith. “What we are talking about is the novelty of my approach,” he explains. “That’s only part of the approach. I have a certain love and faith in my religion that transcends science.”

The rabbi and the priest have had extraordinary experiences. Rabbi Kopelman had the profound privilege of giving the sermon at a prayer service in memory of the victims of the Columbine massacre, as well as providing solace to the family of Liviu Librescu, an engineering professor (and Orthodox Jew) killed during the Virginia Tech massacre in 2007. Rabbi Kopelman performed Shemirah, a Jewish ceremony involving watching over the body from the time of death until burial, never permitting it to be alone. As the shomer (guard), he recited psalms and stayed with Librescu until other rabbis came to accompany his body to Jerusalem for the burial.

Reverend Heller was honored in early 2008 with the Templeton Prize, the world’s largest annual monetary award given to an individual. Bestowed by the John Templeton Foundation, the Prize is worth more than $1.6 million. Heller is using the funds to launch the Copernicus Center for Interdisciplinary Studies in conjunction with Jagiellonian University and the Pontifical Academy of Theology in Cracow to further research and education in science and theology as an academic discipline.

Both theologians still consider themselves physicists. Rabbi Kopelman “doesn’t do much physics”, but “would feel comfortable at an APS meeting.” He occasionally teaches mathematics at a community college. Reverend Heller, on the other hand, takes out a paper and a pencil and works out a problem almost every day.  He often carries a math book or some exercises with him. “If you stop doing physics you forget everything,” he says. So his math work “must be done.” He quips that he regards himself as “the best physicist among priests and the best priest among physicists.”

Was it divine intervention that led these two mortals to devote their lives to physics and faith? Was it free will? Or perhaps it was a combination of many elements, a celestial fusion of divinity, mortality, and quantum mechanics that directed these philosophers to incorporate science with the sacred. In any event, the priest and the rabbi have contributed much to the discussion of the bond between religion and science, as crystallized in the words of another philosopher physicist, who famously wrote that “science without religion is lame, religion without science is blind.” 1

Alaina G. Levine can be reached through her website.

1 ALBERT EINSTEIN, paper prepared for initial meeting of the Conference on Science, Philosophy and Religion in Their Relation to the Democratic Way of Life, New York City, September 9–11, 1940.—Einstein, Out of My Later Years, chapter 8, part 1, p. 26 (1950, rev. and reprinted 1970).