The following ten stories were selected by science writers and editors of the American Institute of Physics (AIP) and of APS as the top ten physics news stories of 2008. They are in no particular order. In many cases, more information about these topics can be found in the new APS online publication, Physics.

Superconductors
An entirely new line of compounds capable of superconductivity at comparatively high temperatures has been isolated. Materials using an iron-arsenic base were found to conduct electricity with zero resistance at temperatures just over 50 Kelvin. This is the first time that a material other than a copper-based compound showed such electrical characteristics at these high temperatures. In addition, these new iron-arsenic-based conductors have been shown to be less brittle and easier to form than older, copper-based materials, potentially lending themselves to more practical uses in the future. Not only does this discovery come with many prospective functional uses, but also it offers clues towards answering the fundamental question of what actually causes high-temperature superconductivity.


LHC
After the better part of a decade, the Large Hadron Collider, located along the Franco-Swiss border, was completed in June. With its 17 mile-long collider tunnel, it is not only the world’s largest particle accelerator but also essentially the largest science experiment in the world. The accelerator will propel protons with energy on the order of 7 TeV per proton, registering their impacts in one of four giant detectors around the track. Physicists hope that these collisions will be energetic enough to produce a variety of exotic particles, including the elusive Higgs boson, the theorized elementary particle that gives matter its mass. A malfunction in September knocked several of its superconducting magnets badly out of alignment, temporarily shutting down the facility. Repairs are under way and technicians expect the LHC should be up and running by the summer of 2009. 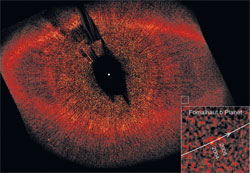 Debris ring around Formalhaut location of extrasolar planet Formalhaut b.

Planets
Major planetary discoveries were made from near and far. Perhaps the biggest discovery comes from outside our solar system. For the first time, astronomers have been able to image extra-solar planets. In addition, scientists have detected spectroscopic evidence of both carbon dioxide and water vapor in some of these planets’ atmospheres. More locally, the Messenger Spacecraft, though still more than two years from reaching its target orbit around Mercury, has already started beaming back spectacular images of the planet’s surface, and discovered its magnetic field to be unexpectedly symmetrical. Numerous probes all over Mars continue to transmit evidence about the red planet’s watery past. The now inert Phoenix Lander found strong evidence of a layer of water ice just under the surface around the polar regions. At the same time, images from the orbiting Mars Reconnaissance Orbiter show landscape features that likely came as the result of a liquid ocean sometime during the planet’s warmer history. The Venus Express has taken outstanding images at a variety of wavelengths of Venus’s cloud cover. Cassini’s continuing mission to Saturn has returned an unprecedented amount of new data about its moons and extensive ring system. Photos and telemetry from the sixth planet have shown a mysterious aurora around its poles, an unexpectedly thinning ring system, and tremendous geysers on its icy moon Enceladus.

An Ultraviolet Image of Venus


Quarks
A new baryon was detected by Fermilab’s DZero experiment. The new particle, dubbed Omega-sub-b, contains two strange quarks and a single bottom quark. Baryons containing a bottom quark are extremely rare and short-lived. The team at Fermilab recorded only 18 instances of the new particle after nearly 100 trillion recorded collisions, each surviving only for about a millisecond before decaying. This discovery continues to fill in the periodic table of baryons and furthers the understanding of the fundamental interactions of quarks and their strong nuclear forces. At the SLAC BaBar experiment in California, scientists have isolated the lowest energy state of bottomonium, a particle composed of a bottom and anti-bottom quark. In addition, in Japan’s KEK laboratories, scientists believe they have detected the first four-quark particles. 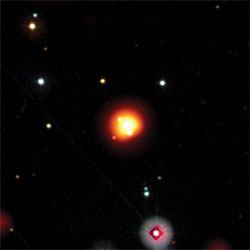 Farthest Gamma Ray Burst
On September 19th NASA’s Swift satellite caught sight of the most distant gamma ray burst ever detected. A tremendous gamma ray burst nearly 12.8 billion light years away was first spotted by the Swift satellite and soon tracked by several ground-based observatories. After analyzing the objects redshift using telemetry from observatories in Chile, scientists were able to calculate the huge distance the object’s light had to travel before reaching Earth. A gamma ray burst that size comes from a super-massive star, many magnitudes larger than our sun, after it has exhausted all of its nuclear fuel and collapsed into itself, forming a black hole. Not only is the September burst the farthest observed event, it is also the oldest. Based on the amount of time for its light to reach Earth, the burst happened when the universe was less than 825 million years old.


Ultra Cold Molecules
For the first time, entire molecules have been cooled to a few hundred-billionths of a degree above absolute zero. By modifying an established laser cooling technique used on individual atoms, two teams were able to create the coldest molecules in history. The team in Boulder, Colorado isolated several individual atoms of potassium and rubidium in an optical lattice formed by crossed laser beams. They then brought the two elements together using Feshbach resonance to bind the atoms into a single molecule, without accidently 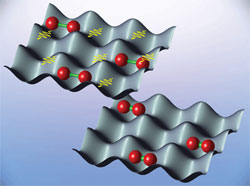 infusing any energy into the cold atoms. At the same time, a team in Innsbruck, Austria combined two rubidium atoms to form their ultracold molecules using the same method. In the past, getting a molecule to remain stable at such low temperatures has been devilishly difficult because of its complex structure. However by first chilling then bonding the individual atoms, the teams were able to increase the life of each molecule dramatically.


Diamond Detectors
Work on the molecular structure of carbon continues to show great promise for quantum computing. This year scientists were able to construct a nano-scale light source that emits a single photon at a time. The team first removed a solitary atom from the carbon’s otherwise regular matrix and then introduced a nitrogen atom nearby. When they excited this crystal with a laser, single polarized photons were emitted from the empty space. These photons could be used to detect very small magnetic forces. Additionally the photons emitted contained two spin states and were able to exist in that state for nearly a millisecond before their wave function collapsed. The emitted photon is essentially a long-lasting qbit which could, with further development, be entangled with other adjacent qbits for uses in quantum computing. Another team at the University of Delft in the Netherlands, working in conjunction with UCSB, was able to detect the spin of a single electron in a diamond environment. At the same time, a group at Harvard was able to locate within a nanometer a single Carbon-11 impurity using its nuclear spin interactions.


Cosmic Rays
Research into high energy cosmic rays keeps posing new questions faster than old ones can be answered. On the one hand, researchers at the Pierre Auger Observatory in Argentina seem to have finally pinned down the uppermost energies of cosmic rays at about 1019 electron volts. However when the Milagro Gamma-Ray Observatory mapped the skies, it found the majority of the high energy (ten trillion plus electron volts) cosmic rays originated in only a few specific directions, prompting the scientists to ask what’s out there? Perhaps even more tantalizingly, several independent observers detected surprisingly large numbers of high energy electrons and positrons hitting the upper atmosphere. These findings have prompted a lot of speculation that they could have originated from some previously unknown type of radio-silent pulsar, or possibly even the product of decayed dark matter particles.


Light Passes through Opaque Matter
Ordinarily when light falls on an opaque object, interference due to the material’s entropy scatters the photons so few if any get through to the other side. Technicians at the University of Twente in the Netherlands have now been able to send large numbers of photons through normally opaque objects by finding low interference paths called “necklace states.” By specially angleing different phases of light at thin zinc strips, the photons travel through these necklace states, avoiding much of the chaos within. Under these conditions, approximately 1000 times the number of photons that would have otherwise been blocked are able to cross the zinc strip. This is the first experimental confirmation of the previously predicted necklace states.


Macroscopic Feedback Cooling
An aluminum bar weighing one metric ton has been successfully cooled to approximately .2mK, the first time anything so massive has been cooled below one millikelvin. That alone is a tremendous achievement; however, the bar is integral to an experiment that could once and for all prove the existence of gravity waves predicted by Einstein. The aluminum mass works as a tuning fork in the AURIGA gravity wave detector in Padova, Italy. By cooling the mass, physicists hope to eliminate any background noise so they can more easily detect any harmonic vibration when the predicted gravity waves strike the aluminum. Should the harmonic effects of these waves be detected, it would be their first direct experimental confirmation since Einstein predicted them in 1918.