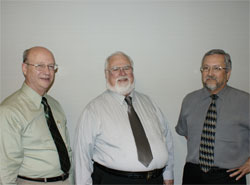 Established 3 years ago, the APS Award for Excellence in Education is primarily intended to recognize a group, rather than an individual. This year's recipient, approved by the APS Executive Board last spring, is the Two-year College Workshop Team, whose leaders are (l to r): David Maloney (Indiana-Purdue University, Fort Wayne), Curtis Hieggelke (Joliet Junior College), and Tom O’Kuma (Lee College).

In recommending the award, the selection committee noted that “physics faculty members in two-year colleges are frequently very isolated from their colleagues and are usually members of general science departments. Very often, there is only one physicist on the faculty of the institution.

Approximately 25% of students who enroll in introductory physics do so at two year institutions, and the percentage is higher for those students who will become K-12 teachers. In addition, the TYCs are the portal to higher education for minority students and currently constitute the fastest growing segment of higher education in the US. By reaching out to these faculty and building a network among them, the Two Year College Workshop Team has had a critical impact in improving physics instruction.”