A Physics Star Among the Stars 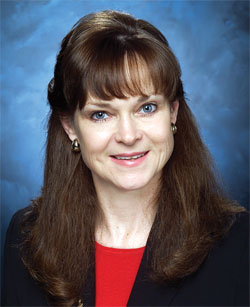 Tammy Jernigan was in space when she faced a curious conundrum concerning a floating ball of fluid. As an astronaut, she had been charged with many tasks of a scientific and engineering nature, as well as the opportunity to produce educational and outreach materials to inspire kids to study science. When it came time for her and her crew to create a video in which they performed a specific creative space-based demo, they found themselves facing an unforeseen challenge: how do you still look professional assembling and then drinking from a sphere of liquid while floating in space?

Jernigan, former astronaut, physicist, and now the Associate Director for Strategic Human Capital Management at Lawrence Livermore National Laboratory (LLNL), recalls performing this demo as one of the funniest moments of her otherworldly experience, as well as one that actually helped her launch a career in human resources (HR).

She and her astro-colleagues were filming what was supposed to be a cute educational video in which they took a drink bag with a straw, squirted the liquid into a free-floating ball, and then poked straws into the liquid to drink it out of the air. The final video “makes it look pretty straightforward and neat,” Jernigan, 49, recalls. But it took many takes. “We made a hideous mess.”

She learned a few vital things from this experience. First, while Earth-based spills generally contain the mess within one location, in space, “if you bump a sphere of liquid, it goes into hundreds of little droplets that spread out in three dimensions all over the place.” Second and consequently, “gravity is very convenient.” And third, and most importantly, it’s the people with whom you work that make all the difference in the success of any mission, both earthbound and beyond.

Jernigan understands this from many different levels, because at LLNL she is in charge of all HR activity, which she categorizes as “strategic forward-looking, proactive workforce management.” She must be a visionary and a realistic planner in terms of resources, both human and monetary, and anything else that can influence how LLNL reaches its goals.

Prior to this she served as Principal Deputy Associate Director of Physics and Advanced Technologies. Her deep understanding of the operation and science side of the lab propelled her towards the HR position and ultimately landed her the job of taking “workforce management to a new level at the laboratory,” she says.

This year, the lab underwent its first layoffs in over 30 years. “We had a contract transition,” she explains, “and the intersection of the increased cost of doing business associated with the contract transition, inflation and a large lab budget reduction caused the layoffs. …You’re making some projections about what the research portfolio and mission portfolio are going to be in the future.”

The fact that she studied physics and had served on the technical side of the lab for six years before rotating into HR aided her tremendously in dealing with this challenging situation.

She considers her scientific background essential in having an appreciation of the needs of the lab from many different angles. “My physics background and my relationships with the physics and mission directorates (of the lab) really help me to understand the mission of the laboratory and the challenges of executing a national security mission and doing fundamental research in support of that mission,” Jernigan notes. This diverse experience helps her to identify and ask (and answer) the right questions to ensure the success of the lab now and in the future.

Asking and finding answers to problems was actually what got her interested in physics and math in the first place. As a child, “I always liked the beauty and elegance of math,” she says. “I liked the fact that there was always an answer. In science it was so interesting to me to figure out how the world worked and why things behaved the way they did.”

With a bachelors in physics and a masters in engineering, both from Stanford University, she laid out a career course for herself that leaned toward academia for a few years, with the hope of becoming an astronaut someday. However, while working on her PhD on interstellar shockwaves at the University of California at Berkeley, she herself experienced a career shockwave when she was selected for the astronaut program. She was only 26 years old. She moved to Houston to train and finished her doctorate at Rice University.

Jernigan has logged 1,512 hours in space during her five missions, including a number of space walks. She says the ride into space is especially thrilling as you are “sitting on eight million pounds of thrust as you accelerate to 18,000 miles per hour.”

“Once you get there it is an incredible feeling of freedom to float effortlessly through the spacecraft or to do a spacewalk and see this extraordinary planet that we inhabit from the vantage point of space,” she describes.

And while she didn’t consider herself an environmentalist before she became an astronaut, she was moved by her experience in space to have a greater appreciation for our natural resources.

“You look at the planet and there are no borders and dividers,” she says, half joking that this has helped her be better at her HR job since she has to do international recruiting.

But in all seriousness, “I had a very compelling sense that we’re all in this together,” she says. “You see the fragile atmosphere and this lone blue orb suspended in the darkness and you think we have been entrusted with this beautiful Earth and we really have to be good stewards of our planet.”

As a physicist and an astronaut, Jernigan has developed skills that have helped her succeed in all of her careers. From an understanding of what’s required to do basic science, to an appreciation of the importance of teaming and working well with people, Jernigan realizes that having studied physics, she is better prepared for whatever comes her way.

“In physics you learn a certain approach to a problem, that I think you can apply in many areas of your life,” she says. “It’s a general view of the world of trying to be a problem-solver and sit at the table with other problem-solvers and work together to try to come up with the best solution possible.”

She sees parallels between the skills she uses as a HR manager and those she used as an astronaut and a physicist.

“It’s all just having an intellectual curiosity. Wanting to understand [the issues].... All these things are about problem-solving, whether you are in a laboratory, working with a computational physics problem, or a workforce restructuring problem,” she explains. “[One asks] what is my optimum solution? How do I bring in the best ideas? How do I integrate those ideas?”

In HR she has enjoyed learning about professional development opportunities for employees and has mentored many people, especially those early in their vocations. Regarding their careers, she advises her protégés to “choose something that they really love and that they’re going to be passionate about because that’s where they’re going to do their best work.”

And she encourages physicists in particular who want to be leaders in their fields, be it in a lab in space, an office on Earth, or something in between, to add breadth to their backgrounds and concentrate on teambuilding. Learn to lead a team well and to follow well, she says. And of course, it also never hurts to learn the science (and art) of fluid dynamics in zero-gravity environments.