The Physical Society of Visayas and Mindanao, Philippines 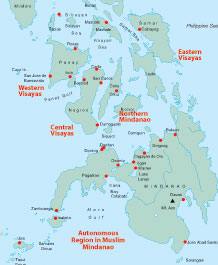 Since many APS members are interested in international development, I want to introduce the American Physical Society to an organization in the Philippines that is promoting physics education and research among increasingly diverse Filipinos with significantly different cultural perspectives, experiences and expectations. Aligning with the APS mission “to advance and diffuse the knowledge of physics,” this young organization also aims to collaborate and cooperate with local and international physical societies to promote physics for the benefit of humanity.

The Physical Society of Visayas and Mindanao of the Philippines, locally known as Samahang Pisikang Visayas at Mindanao (SPVM), is an organization of physics teachers, researchers and other physics enthusiasts. SPVM was officially instituted on April 21, 1995 during the National Science Conference on Theoretical and Experimental Physics held at the Mindanao State University-Iligan Institute of Technology (MSU-IIT), Iligan City with Angelina M. Bacala, PhD as Founding President. SPVM has charter members all based in Visayas and Mindanao, Southern Philippines. To date, membership in the organization has expanded to include physics professionals from all regions of the Philippines and a number from Japan and the USA. Presently, SPVM is headed by Jinky B. Bornales, PhD as President and Hitoshi Miyata of Japan as Adviser for International Affairs. Today, SPVM has become a very active professional organization which envisions a scientific community bound by a common desire to advance physics in all fields and to make physics education and research a potent tool for development in the Philippines.

Since its founding in 1995, the SPVM has organized national physics conferences and workshops hosted by big universities in different parts of the Philippines. SPVM-organized national conferences and workshops advance its mission to provide a dynamic medium whereby members can exchange ideas and experiences and be updated on the current state of physics research and education in the Philippines and abroad. Development and publication of teaching materials in general physics; physics enrichment programs among high school students; and holding “Mini-Science Olympics” among underprivileged children during the holiday season are some of the other activities conducted by the SPVM–all aiming at its aforementioned vision.

The 10th SPVM National Physics Conference & Workshop was conducted at the St. Louis University, Baguio City on October 16–18, 2008 with 300 in attendance. Ninety-two scientific papers (7 plenary, 62 subplenary and 23 poster papers) were presented in the conference by physics researchers and educators, high school and college teachers, as well as, graduate and undergraduate students. The seven plenary papers focused on the conference theme “SPVM@Luzon: Expanding Physics Frontiers for Filipinos.”

SPVM’s vigor to fast-track science literacy, particularly in physics, in the Philippines is sustained by the spirited vigilance of its members and by the continuous support of MSU-Iligan Institute of Technology, the Philippine Council for Advanced Science and Technology Research and Development (PCASTRD) of the Department of Science and Technology (DOST) and by other generous agencies and private individuals who firmly believe in the advocacy of the Samahang Pisikang Visayas at Mindanao (SPVM).