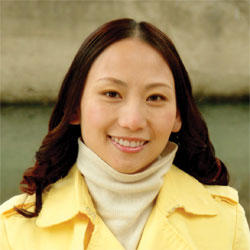 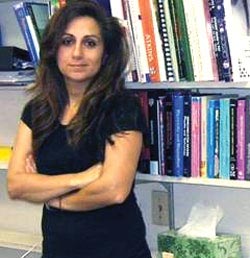 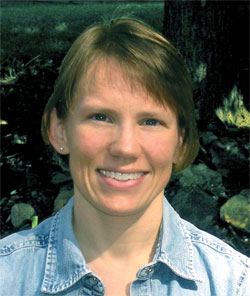 Three women have been selected by the APS Committee on the Status of Women in Physics as the recipients of this year’s M. Hildred Blewett Scholarship: Ya Li of Hampton University, Firouzeh Sabri of the University of Memphis, and Janice Guikema of Johns Hopkins University. The Blewett scholarship is a one year award of up to $45,000 that is intended to enable women scientists to return to physics research after having to interrupt their careers for family reasons. Recipients can use the funds for expenses related to child care, salary, and travel, equipment, and tuition fees.

“I have always been good at mathematics and physics, and I love reading all kinds of scientific articles. Being a scientist has always been my dream, ever since I was a child,” Li says.

In 2003 she moved to Jefferson Lab in Virginia to work on her dissertation, studying duality in meson electroproduction. “The most exciting thing about Jefferson Lab is that they have a high luminosity electron beam, which is great for studying the structure of matter on the nucleon scale,” Li explains. After stopping her career for a few years, she is currently resuming her graduate studies at the nearby Hampton University and working on a new experiment for her dissertation.

“In the past four years our family has grown rapidly. Three new babies came into our lives. It was wonderful. My first child is Jacob, who is 3. My second child is Owen, who is 2. And we have a little girl, Yealiya who is 3 months old,” Li says.

Her husband Tim is the co-chief of operations at Jefferson Lab. His job requires him to take unregulated rotational shifts needed to keep the lab’s accelerator running 24 hours a day 7 days a week. With no family in the area, it is difficult to arrange child care for their three young children.

“I was really overwhelmed by this situation and so I look 2 years leave from research, I didn’t finish my PhD thesis work. But I really wanted to go back to physics; I didn’t want to take too long of a leave to keep me from coming back,” she says.

Li received plenty of support from Hampton professors to return to physics. Her current PhD advisor, Cynthia Keppel, told her about the Blewett scholarship and encouraged her to apply.

Li remarks, “There are a lot of women working in the lab and studying science. Women are very active in physics. But from my own situation I can see obstacles for women to focus on research or teaching, especially when they have children.”

Firouzeh Sabri was born in Tehran, Iran. She received her undergraduate degree in physics from Swansea University, Wales and her PhD from the Cavendish laboratory at University of Cambridge, UK, where she worked on gallium arsenide metal insulator semiconductor transistors.

“I’ve always enjoyed physics; originally I wanted to be an astronaut. That dream had to sort of go on the backburner, although all the way into the end of my undergraduate degree I still had great hopes for it,” she says.

Currently, Sabri’s research is focused on materials science at the University of Memphis, Tennessee. Her work funded by the Blewett scholarship will involve studying the UV degradation of two types of materials. She plans to determine the extent of damage and how the mechanical strength and stability of the materials are compromised by UV radiation.

“What is interesting is that the amount of UV radiation damage on these materials is pretty strong, and the process of this damage remains poorly understood,” she explains.

Sabri was previously a postdoc at the University of Florida, Gainesville when her research was halted after her husband was offered a position near Memphis, Tennessee. Shortly afterward, she relocated to Memphis with her young son Kian. There she accepted a teaching position in the department of physics at the University of Memphis, where she is pursuing a research career.

In this day and age, early-career women scientists are experiencing less discrimination as societal norms and expectations shift, and as more women choose to enter scientific fields. “I have to say that I’ve never been discriminated against during my education. As a young single woman, I never felt anyone hold me back. No one pushed me through either, but I’ve never felt any discrimination. I’ve been treated as an equal, which is fantastic,” says Sabri.

However, she points out that, “I did definitely sense a noticeable change in people after I had a child. It seems like when employers or colleagues find out you have a young child, they automatically prepare themselves for you to not be productive.”

“I think that people, potential employers, whoever they are, they have to try and eliminate those things and judge you based on your capabilities and knowledge, not your family life. Because if you are someone who wants to get the job done, you will,” she says.

Born in New Jersey, Janice Guikema received her undergraduate degree in physics from Cornell University and her PhD from Stanford University, where she used a scanning magnetic microscope to study vortices in high-temperature superconductors. She is currently a postdoc in the experimental condensed matter physics group at Johns Hopkins University.

Her research during the scholarship year will focus on the properties and applications of graphene, a single sheet of carbon atoms that flakes off of graphite. Since it was discovered a few years ago, graphene has been at the forefront of experimental physics research, mainly because of its novel electronic, optical and mechanical properties. The material is also free of defects (hardly ever missing a carbon atom), which makes designing very small, stable, graphene structures at room temperatures feasible.

She plans to fabricate a Hall probe sensor out of graphene, to determine if the material is sensitive enough to rival materials currently used to make Hall probes. In addition, she will also use scanning probe microscopy to study the local behavior of the charge carriers in graphene.

“My goal is to add to new knowledge about graphene and to exploit its properties for some useful devices,” Guikema explains.

Along with her husband Seth, Guikema held a postdoc at Cornell University. They moved to Texas A&M University in 2005 when her husband got a faculty job there. Their son David was born in 2006. Since teaching appeared like a good option for balancing career and family, she accepted a half time lecturer position in physics at Texas A&M. “I enjoyed teaching, but I missed research even more. I found that after my teaching duties and caring for my baby I had little time for fruitful research,” she says.

Guikema cites her PhD advisor Kathryn Moler as a prime mentor, inspiration, and influence. “I was actually her first graduate student, so she definitely was a great example for me, being a woman in physics and very successful, and while I was there she had twins. I think it was really good for me to see someone at a place like Stanford having kids and doing it all, having a successful career and lab,” she reflects.

In January of 2008, her husband received a faculty position at Johns Hopkins University. There, Guikema negotiated a half-time research position with Hopkins faculty. She applied for the Blewett scholarship seeking more freedom to follow her research interests. The scholarship will enable her to work more hours and hire one or two undergraduates.

“I’m realizing now that in terms of your whole life and career, having a baby is a short time period. That’s partly why I stepped back, because I don’t want to miss out on my kid. It’s better not to be overwhelmed and feel pulled in all directions. It’s better to have a balance, even if that means not publishing as many papers, as long as you’re still moving forward. And that’s what I am trying to do,” she says.

M. Hildred Blewett was a particle accelerator physicist whose dedication to physics prompted to her to leave almost all of her money to APS after her death in 2004, at age 93. Her intent was to help women overcome some of the many obstacles they face in the field by providing financial assistance in the form of scholarships. Born in Canada, Blewett began her career at General Electric (GE) in Schenectady, New York in the 1940s, a time when women physicists were scarce. While at GE, Blewett developed a method of controlling smoke pollution from factory chimneys. In 1947 she moved to Brookhaven National Laboratory, where she and her then husband John Blewett were among the original team members. Blewett later worked at Argonne National Laboratory, and then at CERN in Switzerland. She retired from CERN in 1977 and relocated to Vancouver.