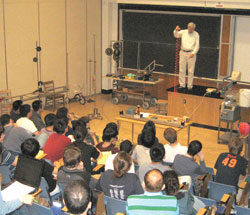 
Richard Berg challenges the members of the US Physics Olympiad team to predict what will happen when he drops the slinky.

Richard Berg of the University of Maryland is standing on top of a desk, one arm outstretched and grasping a slinky. The bottom end isn’t touching the ground. What happens to the bottom end if the upper end is released? An eager group of hands shoots up in the air. Welcome to the 2008 US Physics Team training camp. The students were responding to Berg’s question during his physics IQ test lecture, one of the many entertaining but challenging events the team will experience during its 10-day stay at the campus in College Park.

The 24 students attending camp were selected through a highly competitive elimination process, and they represent the brightest, most disciplined high school physics students in the United States. Five of these students will be chosen to represent the US at the 67th International Physics Olympiad July 20-29 in Hanoi, Vietnam.

The daily routine is intensive, studying physics from 8:00 a.m. to 9:30 p.m. “I wish we could sleep in at least one day,” says Tucker Chan, a senior from Princeton High School in Princeton, NJ.  The week consists of 5 mystery labs, 7 exams, and daily lectures on oscillations, waves, relativity, and thermodynamics.

Scattered throughout the week were games, including Frisbee® most nights, and a trip to Congress in Washington DC, where the students toured the city and met former Democratic presidential nominee John Kerry. Students also presented a physics-related toy to their own Senators and Representatives.

“Only special kids get to this level of math and physics, they have to push themselves. This means doing extra problems on their own time. The most rewarding aspects of this experience are interacting with the kids, and pushing them further intellectually. Many times they push you,” says coach David Jones, an instructor at Florida International University and high school teacher of 20 years.

The students, ranging from freshmen to seniors and coming from a variety of backgrounds, are enthusiastic about camp, ready to absorb as much information as they can, make new friends, and share their passion for physics with others.

Edward Gan, a junior from Montgomery Blair High School in Maryland, discusses the exposure to university-level work and equipment the camp provides. “Camp gives you direction. They give you all the materials and everything you need to do labs, things you don’t have at home, like lasers. The best part is, if you do it right you might actually get a right answer, whereas at home you wouldn’t.”

Despite the fact that students are competing against each other for a spot on the traveling team, the atmosphere is jovial. Students and coaches crack jokes and laugh constantly at dinner, playing around with optical illusion toys and glowing balls in between bites of spaghetti and meatballs.

“You would expect it to be really competitive, but there is a real collaborative spirit, everyone is helping each other out,” notes Kiranmayi Bhattaram, a junior from San Jose, California. Many students are just happy to be in the company of others who share similar interests.

With a talent for mentorship, coaches are largely responsible for the student’s enjoyment, and they work hard to ensure campers are prepared for the difficulties of international competition. “The coaches here aren’t like regular teachers. They put life into their teaching, and they’re really fun to hang around,” says Alesia Dechkovskaia, a junior from Durham, North Carolina. “I hadn’t really thought about majoring in physics in college, it’s always been a hobby of mine. But the lab experience I’ve gotten from camp has made me want to do more,” she says.

The feeling seems to be reciprocal. Head coach Robert Shultz says, “I enjoy the challenge in working with high school students. I get a lot of questions I have to think about, and it is rewarding to see the student’s hard work pay off.” Shultz has been coaching the US team for the past 8 years.

After a careful selection process (based mainly on exam and mystery lab scores), the five finalists selected to comprise the traveling team were announced the last day of camp before a final dinner reception. The 2008 competitors are Tucker Chan; Edward Gan; Rui Hu, a senior from the Charter School of Wilmington in Delaware; Joshua Oreman, a junior from Harvard Westlake School in California; and Danny Zhu, a junior from Stuyvesant High School in New York.

More information about the traveling team, and the rest of the US participants, can be found at AAPT 2008 Physics Team.

The traveling team will head to the west coast, meeting for 3 days of rigorous preparation at California State Polytechnic University before flying to Hanoi. Last year’s team traveled to Isfahan, Iran where they won two gold and three silver medals.

The event is sponsored by the American Association of Physics Teachers, which also selects the participants and organizes the training camp at the University of Maryland. Additional funding comes from the American Institute of Physics and its member societies, including APS.

Created in 1967 by Eastern European nations, the first Physics Olympiad was held in Warsaw, Poland. Western countries began to participate throughout 1980’s, with the US entering in 1986 as the program expanded. Since then, the US has continually ranked near the top 10 of all participants. Today, high school students from over 60 countries take part in the nine-day competition. The Vietnamese Physical Society and Ministry of Education and Training organized this year’s Olympiad.