By the end of the 18th century, scientists had noticed many electrical phenomena and many magnetic phenomena, but most believed that these were distinct forces. Then in July 1820, Danish natural philosopher Hans Christian Oersted published a pamphlet that showed clearly that they were in fact closely related.

Hans Christian Oersted was born in August 1777, in Rudkobing, Denmark. He was educated mainly at home, and showed some interest in science as a child. At age 13 he apprenticed himself to his father, a pharmacist. In 1794, he entered the University of Copenhagen, where he studied physics, philosophy and pharmacy, and earned a PhD in philosophy.

He completed his PhD in 1801, and, as was customary, he began traveling around Europe, visiting Germany and France and meeting other scientists. One person he met, and may have been inspired by, was Johann Ritter, one of the few scientists at the time who believed there was a connection between electricity and magnetism. 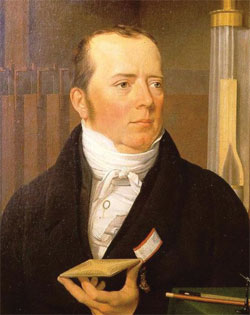 Returning to Copenhagen in 1803, Oersted sought a university position teaching physics, but didn’t immediately get one. Instead he began giving lectures privately, charging admission. Soon his lectures became popular, and he was given an appointment in 1806 at the University of Copenhagen, where he expanded the physics and chemistry program and established new laboratories. He also continued his own research in physics and other areas of science. His first scientific paper was on electrical and chemical forces. He investigated a variety of problems in physics, including the compressibility of water and the use of electric currents to explode mines.

Oersted made the discovery for which he is famous in 1820. At the time, although most scientists thought electricity and magnetism were not related, there were some reasons to think there might be a connection. For instance, it had long been known that a compass, when struck by lightning, could reverse polarity. Oersted had previously noted a similarity between thermal radiation and light, though he did not determine that both are electromagnetic waves. He seems to have believed that electricity and magnetism were forces radiated by all substances, and these forces might somehow interfere with each other.

During a lecture demonstration, on April 21, 1820, while setting up his apparatus, Oersted noticed that when he turned on an electric current by connecting the wire to both ends of the battery, a compass needle held nearby deflected away from magnetic north, where it normally pointed. The compass needle moved only slightly, so slightly that the audience didn’t even notice. But it was clear to Oersted that something significant was happening.

Some people have suggested that this was a totally accidental discovery, but accounts differ on whether the demonstration was designed to look for a connection between electricity and magnetism, or was intended to demonstrate something else entirely. Certainly Oersted was well prepared to observe such an effect, with the compass needle and the battery (or “galvanic apparatus,” as he called it) on hand.

Whether completely accidental or at least somewhat expected, Oersted was intrigued by his observation. He didn’t immediately find a mathematical explanation, but he thought it over for the next three months, and then continued to experiment, until he was quite certain that an electric current could produce a magnetic field (which he called an “electric conflict”).

On July 21, 1820, Oersted published his results in a pamphlet, which was circulated privately to physicists and scientific societies. His results were mainly qualitative, but the effect was clear–an electric current generates a magnetic force.

His battery, a voltaic pile using 20 copper rectangles, probably produced an emf of about 15-20 volts. He tried various types of wires, and still found the compass needle deflected. When he reversed the current, he found the needle deflected in the opposite direction. He experimented with various orientations of the needle and wire. He also noticed that the effect couldn’t be shielded by placing wood or glass between the compass and the electric current.

Oersted continued working in physics. He started the Society for Dissemination of Natural Science, which was dedicated to making science accessible to the public, something he thought was very important. In 1829 he established the Polytechnical Institute in Copenhagen. He was also a published writer and poet, and contributed to other fields of science, such as chemistry–for instance, in 1825 he produced aluminum for the first time. Oersted died in 1851. His 1820 discovery marked the beginning of a revolution in the understanding of electromagnetism, providing the first connection between what had been thought to be two very different physical phenomena.