PhysicsCentral Takes on a New Look and Feel 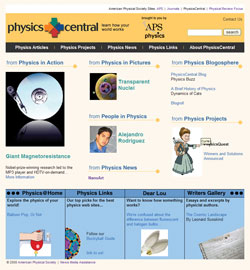 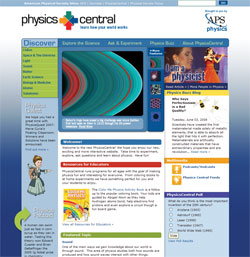 When PhysicsCentral, the APS website for the public, was launched in late 2000, the web was a very different place. The original PhysicsCentral ( top, right) was all text and pictures, with an occasional animated gif to liven things up. But now the web is filled with podcasts and vodcasts, blogs and RSS feeds, words that didn't even exist back then.

Clearly PhysicsCentral needed an upgrade if it wanted to maintain its core audience of members of the public with an interest in science, especially students at all levels from middle school through university. Rather than do it piecemeal, it was decided last year to undertake a complete redesign.

The new PhysicsCentral was launched in May, and as can be seen by comparing the two pictures, the look is very different. Underneath the design is a dynamic architecture that accesses the content more efficiently and brings more of it to the home page. The site now features its own blog, Physics Buzz, and APS Head of Public Outreach Jessica Clark, who runs PhysicsCentral, is busy collecting a series of podcasts and vodcasts that will augment the text and pictures format of the earlier material.

“A lot of work went into the redesign,” says Clark. “The new site is interactive with tons of fun new features which will engage all levels of users, from K to grey.”