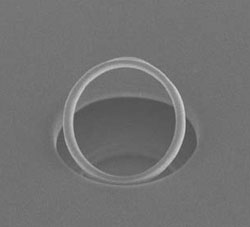 Steven Prawer/UnivMelbourne The world’s smallest diamond ring.
Diamond has the potential to be a useful component for quantum information processing systems, according to several speakers at a March Meeting session.

Scientists can now grow high quality synthetic diamonds. Diamond has high thermal conductivity and is an electrical insulator. It has a type of impurity called an N-V center, in which a nitrogen atom takes the place of one carbon atom in the diamond, and a vacancy takes the place of a neighboring carbon. An unpaired electron circulates around the nitrogen-vacancy center. This electron can be excited or polarized by a laser.  When excited, the electron emits a single photon as it falls back to a lower energy state. The electron can be put into a quantum superposition where it has both spin up and spin down, so it could potentially be used as a qubit, a quantum bit that is both 0 and 1 at the same time that would form the basis of a quantum computer.

Furthermore, these impurities in diamond can be created and manipulated at room temperature, unlike other potential quantum computing systems, and NV-center qubits are long-lived.

Ronald Hanson, now at the Kavli Instituteof Nanoscience, Delft, previously of UC Santa Barbara, reported the achievement of electron spin resonance, analogous to nuclear magnetic resonance at the March Meeting. He and colleagues flip the spin of an electron in an NV center, and then watch as it loses its polarization through interactions with nearby nitrogen impurities. They can tune the interactions with the nitrogen atoms (called a “spin bath”) by adjusting an external magnetic field. The researchers also reported the results in Science Online March 13.

In another step towards diamond-based quantum computing, Mikhail Lukin of Harvard has been able to detect the spin of a single carbon-13 nucleus in a diamond by its effect on the electron spins in nearby NV centers. Carbon-13, which makes up about 1% of diamond, is magnetic, while carbon-12 atoms have no net spin. Detecting and controlling single nuclear spins is challenging, but Lukin has been able to detect the weak magnetic fields of single carbon-13 atoms with nanometer resolution. The method could be useful for extremely precise magnetic resonance imaging.

Lukin’s group has also made qubits using the NV-center-carbon 13 interaction. Such qubits have up to one second long coherence times at room temperature, which is unprecedented for solid state qubits, he said. Lukin also believes he can link up several of these qubits in a small register for quantum information processing.

Charles Santori of Hewlett Packard described an all-optical method of manipulating spins in diamond. His goal is to create a photonic network in diamond for quantum information processing applications. His approach uses an array of microcavities and microphotonic waveguides; there is no need for an external magnetic field. This optical approach to manipulating spins in diamond is a step towards building networks of linked qubits to create a working quantum computer, he said.

Steve Prawer of the University of Melbourne showed off a picture of the world’s smallest diamond ring. At just 300 nanometers in cross-section diameter, and about 5 micrometers across, it could be used as a potential element of a quantum computing scheme. The tiny ring, carved from single crystal synthetic diamond, could be useful for producing and detecting single photons. The photons can be used as qubits in a quantum computer. Single photons are also needed in applications such as secure quantum communication schemes. This is just one small step, but Prawer believes diamond quantum information processing devices are on a path to commercialization. “I think we can look forward to actual devices coming out in the next few years,” he said.