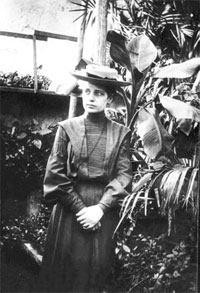 In December 1938, over Christmas vacation, physicists Lise Meitner and Otto Frisch made a startling discovery that would immediately revolutionize nuclear physics and lead to the atomic bomb. Trying to explain a puzzling finding made by nuclear chemist Otto Hahn in Berlin, Meitner and Frisch realized that something previously thought impossible was actually happening: that a uranium nucleus had split in two.

Lise Meitner was born in Vienna in 1878. She grew up in an intellectual family, and studied physics at the University of Vienna, receiving a doctorate in 1906. As a woman, the only position available to her at that time in Vienna was as a schoolteacher, so she went to Berlin in 1907 in search of research opportunities. Meitner was shy, but soon became a friend and collaborator of chemist Otto Hahn. In 1912 the Kaiser Wilhelm Institute for chemistry was established, and she obtained a position there. During World War I Meitner volunteered as an x-ray nurse in the Austrian army. Upon returning to Berlin she was made head of a physics section at the KWI, where she did research in nuclear physics.

After the neutron was discovered 1932, scientists realized that it would make a good probe of the atomic nucleus. In 1934 Enrico Fermi bombarded uranium with neutrons, producing what he thought were the first elements heavier than uranium. Most scientists thought that hitting a large nucleus like uranium with a neutron could only induce small changes in the number of neutrons or protons. However, one chemist, Ida Noddack, pointed out that Fermi hadn’t ruled out the possibility that in his reactions, the uranium might actually have broken up into lighter elements, though she didn’t propose any theoretical basis for how that could happen. Her paper was largely ignored, and no one, not even Noddack herself, followed up on the idea.

Following Fermi’s work, Meitner and Hahn, along with chemist Fritz Strassmann, also began bombarding uranium and other elements with neutrons and identifying the series of decay products. Hahn carried out the careful chemical analysis; Meitner, the physicist, explained the nuclear processes involved.

Meitner, who had Jewish ancestry, worked at the KWI until July 1938, when she was forced to flee from the Nazis. Her research was her whole life, and she had tried to hang on to her position as long as possible, but when it became clear that she would be in danger, she left hastily, with just two small suitcases. She took a position in Stockholm at the Nobel Institute for Physics, but she had few resources for her research there, and felt unwelcome and isolated. She kept up her correspondence with Hahn, and continued to advise him about their joint research.

In December 1938, Hahn and Strassmann, continuing their experiments bombarding uranium with neutrons, found what appeared to be isotopes of barium among the decay products. They couldn’t explain it, since it was thought that a tiny neutron couldn't possibly cause the nucleus to crack in two to produce much lighter elements. Hahn sent a letter to Meitner describing the puzzling finding.

Over the Christmas holiday, Meitner had a visit from her nephew, Otto Frisch, a physicist who worked in Copenhagen at Niels Bohr's institute. Meitner shared Hahn's letter with Frisch. They knew that Hahn was a good chemist and had not made a mistake, but the results didn't make sense. They went for a walk in the snow to talk about the matter, Frisch on skis, Meitner keeping up on foot. They stopped at a tree stump to do some calculations. Meitner suggested they view the nucleus like a liquid drop, following a model that had been proposed earlier by the Russian physicist George Gamow and then further promoted by Bohr. Frisch, who was better at visualizing things, drew diagrams showing how after being hit with a neutron, the uranium nucleus might, like a water drop, become elongated, then start to pinch in the middle, and finally split into two drops.

After the split, the two drops would be driven apart by their mutual electric repulsion at high energy, about 200 MeV, Frisch and Meitner figured. Where would the energy come from? Meitner determined that the two daughter nuclei together would be less massive than the original uranium nucleus by about one-fifth the mass of a proton, which, when plugged into Einstein’s famous formula, E=mc2, works out to 200 MeV. Everything fit.

Frisch left Sweden after Christmas dinner. Having made the initial breakthrough, he and Meitner collaborated by long-distance telephone. Frisch talked briefly with Bohr, who then carried the news of the discovery of fission to America, where it met with immediate interest.

Meitner and Frisch sent their paper to Nature in January. Frisch named the new nuclear process "fission" after learning that the term "binary fission" was used by biologists to describe cell division. Hahn and Strassmann published their finding separately, and did not acknowledge Meitner’s role in the discovery.

Scientists quickly recognized that if the fission reaction also emitted enough secondary neutrons, a chain reaction could potentially occur, releasing enormous amounts of energy. Many scientists joined the efforts to produce an atomic bomb, but Meitner wanted no part of that work, and was later greatly saddened by the fact that her discovery had led to such destructive weapons. She did continue her research on nuclear reactions, and contributed to the construction of Sweden's first nuclear reactor. Hahn won the Nobel Prize in chemistry in 1944, but Meitner was never recognized for her important role in the discovery of fission.