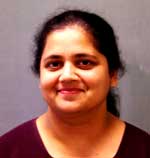 India to Albany, Albany to Austin, Austin to Orlando! While the life of Archana Dubey has taken her across the world and around the US, the frequent changes in scenery have impeded her academic career. Her current institution, the University of Central Florida, has offered as much support as possible for her research endeavors, but she wants to do more. The Hildred M. Blewett Scholarship, recently awarded to her through APS, will help her cut a wider path through the thickets of theoretical physics.

The scholarship, a grant of up to $45,000, was created from money left to APS by Hildred M. Blewett with the purpose of advancing the research careers of women in physics. Specifically, it is intended to jump-start the work of women whose research has been interrupted for reasons concerned with family.

While all of the candidates clearly had excellent research credentials and plans, Dubey stood out in her perseverance through three career interruptions, the baby, and two moves for her husband’s job changes, said Peter Sheldon, a member of the committee that selected Dubey for the Blewett Scholarship. She had great support from the institution where she is trying to get some research going, and it seemed clear that the scholarship would help her to establish herself there.

Born in Rajasthan, India, Dubey completed most of her doctoral work at Bhavnagar University. Towards the end, she married and moved to Albany, NY. “While I was able to finish my PhD work remotely, continuation of further work became cumbersome if not impossible,” she said.

In Albany, she first met Tara Prasad Das, who introduced her to theoretical investigations of electronic structures. She landed a post-doctoral position at Rensselaer Polytechnic Institute in Troy, NY; however, she put her research on hold to focus on her first child.

In the meantime, she and her husband moved to Austin, Texas. Here, she made new contacts by taking classes and collaborating with professors. She again engaged in research activities with Texas State University during her fifteen-month stay in Austin.

Dubey has focused her research activities on theoretical physics over the last two and half years. This discipline gives her the freedom to do research at any time from any location, and she possesses the diligence to put this freedom to good use. She expects to enhance her research repertoire with projects funded through the Blewett Scholarship.

Her interest lies in understanding the atomic and electronic structures of hemoglobin molecules. Found in red blood cells, hemoglobin binds oxygen and carries it to other cells through the circulatory system.

Her work may have medical value in the future. This very basic understanding of these essential elements of life has the potential to be the basis of future developments of diagnostic techniques as well as cure diseases related to blood, Dubey explained.

Current theory says that the electrons in oxyhemoglobin should be in a singlet state with their spins anti-aligned. However, experiments involving bulk amounts of oxyhemoglobin demonstrate a response to magnetic fields which would not occur if the electron spins cancelled.

Dubey believes the first excited state of oxyhemoglobin is a spin-aligned triplet state. She also believes that relatively little energy is required for an electron to be promoted to the first excited state. This way, statistical fluctuations in energy among oxyhemoglobin molecules at room temperature would allow for some of them to have electrons in the triplet state, accounting for the observed response to magnetic fields.

She will investigate this hypothesis through first principles calculation of the energy of ground and first excited states. She will test the ground state calculations against experimental data taken through Mössbauer spectroscopy to confirm that her methods are sound. Then, she will calculate the energy required to promote an electron from the ground to first excited state.

Through Boltzmann statistics, she will determine if this energy is small enough to produce significant amounts of triplet-state oxyhemoglobin at room temperature. Finally, she will examine the features of the triplet state through muon spin resonance, comparing with experimental research.

In the course of this work, she looks forward to hiring a graduate student, attending national and international conferences, and making new contacts in the interdisciplinary field of theoretical biophysics. It will be her first time hiring graduate students, and her standards reflect those that she set for herself. “I would like a student to have determination, drive, integrity, and desire,” Dubey articulated. “I believe if there is passion for something, it happens without effort.”

Receiving the award with a sense of accomplishment, Dubey is also very grateful to those who helped her along the way. “I want to take this opportunity to thank APS for providing me the opportunity to establish my credentials, Professor Das and Professor Rahman’s unconditional support and mentorship for my growth, and my daughter, Shikha, who usually gets the short end of every deal for being my best partner and counselor in the times of need,” she said.

By aiding in the advancement of her career at such a critical time, the Blewett scholarship will help Dubey fulfill her dream of conducting physics research for years to come.