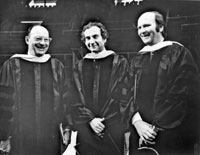 But no one could completely explain how it worked. For the next few decades, many prominent physicists worked to develop a theory of the mechanism underlying superconductivity, but no one had much success, and some despaired of figuring it out.  One such physicist, Felix Bloch, was quoted as proposing “Bloch’s theorem: Superconductivity is impossible.”

Richard Feynman also later recalled that he had “spent an awful lot of time in trying to understand it and doing everything by means of which I could approach it… I developed an emotional block against the problem of superconductivity, so that when I learned about the BCS paper I could not bring myself to read it for a long time.”

While theorists were making little progress in the years following Onnes’s discovery, experimentalists were discovering some interesting features of superconductors. In 1933, Walther Meissner found that superconductors would expel a magnetic field, an effect that makes it possible to levitate a magnet. The discovery of the Meissner effect, as it is called, added a new wrinkle that any theory of superconductivity would have to explain. John Bardeen made an attempt at the problem of superconductivity, but then went on to other work.

Some physicists did have partial success in explaining superconductivity. The brothers Fritz and Heinz  London came up with a theory that explained some of its features, but didn’t provide a mechanism at the microscopic level. In 1950, Herbert Frohlich proposed that superconductivity might have to do with interactions between the electrons and the vibrations of the crystal lattice, or phonons. Around that time, experimenters observed that the critical temperature, at which a material becomes superconducting, is related to the atomic mass of the superconductor. Frohlich’s theory did explain this isotope effect, but couldn’t account for other properties of superconductivity such as the Meissner effect.

The BCS theory was extremely successful, explaining in detail the mechanism of superconductivity and associated effects, and it agreed amazingly well with experimental data. “All of the hitherto puzzling features of superconductors fitted neatly together like the pieces of a jigsaw puzzle,” Bardeen later recalled. BCS theory was quickly accepted as correct.

Bardeen, Cooper, and Schrieffer were awarded the Nobel Prize in 1972 for their theory of superconductivity. This was Bardeen’s second Nobel Prize in physics–his first was shared with William Shockley and Walter Brattain for the transistor in 1956.

The BCS theory works for conventional superconductors, but does not explain the high temperature superconductors first discovered 20 years ago, so puzzles still remain. However, BCS theory has had an impact far beyond superconductivity, as scientists have found states analogous to the BCS superconductor in astrophysics and nuclear physics.