May 1932: Chadwick Reports the Discovery of the Neutron

By 1920, physicists knew that most of the mass of the atom was located in a nucleus at its center, and that this central core contained protons. In May 1932 James Chadwick announced that the core also contained a new uncharged particle, which he called the neutron.

Chadwick was born in1891 in Manchester, England. He was a shy child from a working class family, but his talents caught his teachers’ attention, and he was sent to study physics at the University of Manchester, where he worked with Ernest Rutherford on various radioactivity studies.

In 1914, Chadwick decided to travel to Germany to study with Hans Geiger. Unfortunately, not long after he arrived, WWI broke out and Chadwick ended up spending the next four years in a prison camp there. This did not entirely stop his scientific studies. To keep from being bored, he and some fellow prisoners formed a science club, lectured to each other, and managed to convince the guards to let them set up a small lab. Though many chemicals were hard to get hold of, Chadwick even found a type of radioactive toothpaste that was on the market in Germany at the time, and managed to persuade the guards to supply him with it. Using some tin foil and wood he built an electroscope and did some simple experiments.

After the war, Chadwick returned to England, where he finished his PhD in Cambridge in 1921 with Rutherford, who was then Director of Cambridge University’s Cavendish laboratory. Chadwick was able to continue to work on radioactivity, now with more sophisticated apparatus than tin foil and toothpaste. In 1923, Chadwick was appointed assistant director of Cavendish Laboratory. 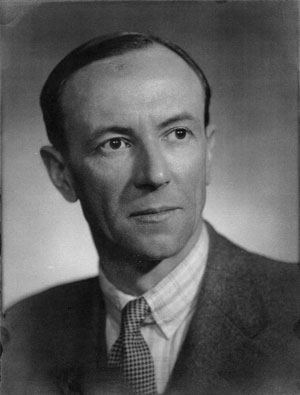 Rutherford had discovered the atomic nucleus in 1911, and had observed the proton in 1919. However, it seemed there must be something in the nucleus in addition to protons. For instance, helium was known to have an atomic number of 2 but a mass number of 4. Some scientists thought there were additional protons in the nucleus, along with an equal number of electrons to cancel out the additional charge. In 1920, Rutherford proposed that an electron and a proton could actually combine to form a new, neutral particle, but there was no real evidence for this, and the proposed neutral particle would be difficult to detect.

Chadwick went on to work on other projects, but kept thinking about the problem. Around 1930, several researchers, including German physicist Walter Bothe and his student Becker had begun bombarding beryllium with alpha particles from a polonium source and studying the radiation emitted by the beryllium as a result. Some scientists thought this highly penetrating radiation emitted by the beryllium consisted of high energy photons. Chadwick had noticed some odd features of this radiation, and began to think it might instead consist of neutral particles such as those Rutherford had proposed.

One experiment in particular caught his attention: Frédéric and Irène Joliot-Curie had studied the then-unidentified radiation from beryllium as it hit a paraffin wax target. They found that this radiation knocked loose protons from hydrogen atoms in that target, and those protons recoiled with very high velocity.

Joliot-Curie believed the radiation hitting the paraffin target must be high energy gamma photons, but Chadwick thought that explanation didn’t fit. Photons, having no mass, wouldn’t knock loose particles as heavy as protons from the target, he reasoned. In 1932, he tried similar experiments himself, and became convinced that the radiation ejected by the beryllium was in fact a neutral particle about the mass of a proton. He also tried other targets in addition to the paraffin wax, including helium, nitrogen, and lithium, which helped him determine that the mass of the new particle was just slightly more than the mass of the proton.

Chadwick also noted that because the neutrons had no charge, they penetrated much further into a target than protons would.

In February 1932, after experimenting for only about two weeks, Chadwick published a paper titled “The Possible Existence of a Neutron,” in which he proposed that the evidence favored the neutron rather than the gamma ray photons as the correct interpretation of the mysterious radiation. Then a few months later, in May 1932, Chadwick submitted the more definite paper titled “The Existence of a Neutron.”

By 1934 it had been established that the newly discovered neutron was in fact a new fundamental particle, not a proton and an electron bound together as Rutherford had originally suggested.

The discovery of neutron quickly changed scientists’ view of the atom, and Chadwick was awarded the Nobel Prize in 1935 for the discovery. Scientists soon realized that the newly discovered neutron, as an uncharged but fairly massive particle, could be used to probe other nuclei. It didn’t take long for scientists to find that hitting uranium with neutrons resulted in the fission of the uranium nucleus and the release of incredible amounts of energy, making possible nuclear weapons. Chadwick, whose discovery of the neutron had paved the way for the atomic bomb, worked on the Manhattan Project during WWII. He died in 1974.