The Embargo Should Go 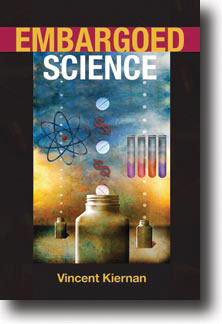 When they’re not praising the embargo system–under which science journals provide journalists with advance copies of newsworthy articles, but set strict timelines on when that information can be shared–science and medical journalists often bitterly complain that they are its prisoners. For example, Natalie Angier of The New York Times claims that the embargo system gives journal editors “a stranglehold on journalistic initiative.”

Embargoes do exert great influence over what gets covered and how, but the embargo system is hardly a tyranny of journals over journalists. Journalists are enthusiastic participants in the embargo system and act to keep it functioning. In short, if journalists are in a stranglehold, it is a self-inflicted stranglehold–and one that does not serve the public interest. It need not be this way. “Any decent journalist knows what’s in Nature next week,” says David Whitehouse, science editor for the BBC’s Web site.

Undoubtedly, the scientific establishment benefits handsomely from the unending torrent of news coverage about research being published in scientific and medical journals. The pattern of news coverage signals to readers and viewers–not to mention lawmakers, business leaders, and others–that science and medicine are important. Whether the research being reported is “good news” (for example, drug X is an effective treatment for disease Y) or “bad news” (Z causes cancer), the scientific and medical establishments are always cast in a positive light, as the font of the new finding.

But media coverage of research journals often amounts to little more than highbrow infotainment: What’s the latest theory about the extinction of the dinosaurs? What’s the newest thing found to cause cancer? Look at the cool photographs from the Hubble Space Telescope! These are the types of subjects that dominate embargo-controlled news reporting about science and medicine.

Journalists and their media organizations also benefit from the embargo. The embargo supplies news on a dependable schedule keyed to the production constraints of news organizations: if it’s Thursday, it’s time for a newspaper article about some paper published in The New England Journal of Medicine. The news peg provided by the embargo (“In a paper published today in Science...”) also makes it easier for journalists to convince their editors to run certain research stories. The embargo system capitalizes on the fact that journalists and their editors rely heavily on timeliness as a criterion in defining what is news and what is not.

This is a long-standing problem. “To write a story saying that ‘X’ was discovered today is a fiction,” Howard Simons, then a science writer for The Washington Post, said almost 40 years ago. “The today lead is something most of us do because we are still trapped in traditional ideas of newspapering. At a scientific meeting there may be hundreds of papers delivered, all of them important. There is no reason why we shouldn’t pick up one of those papers three weeks later and do a story about it. But the traditional light bulb flashes on in our minds and says it’s old if it’s not hung up like a coat on a news peg.” The embargo perpetuates the problem by giving journalists and their media organizations an unending stream of such pegs, so many that a lazy journalist could write only about journal articles if he or she chose.

The embargo works against the public interest in many ways. One is in how the embargo steers journalists away from covering science and medicine as institutions with messy problems, such as fraud, mistreatment of human subjects, failed research, and misplaced priorities. Journalists who are chasing after the latest embargoed journal article do not have time to investigate the workings of science and medicine in this way. “To survive, reporters become dependent on the daily cascade of embargoed research papers, e-mailed press releases, university tip sheets, and conference abstracts,” says Robert Lee Hotz, a science reporter at the Los Angeles Times.

“The goal of all of us ought to be to try to get around embargoes and packaged science journalism by finding new ways to get our collective noses under the tent,” according to Cristine Russell, former science and medical reporter for The Washington Star and The Washington Post. “I think that we should not have such herd journalism. People should get out and cover science.”

The embargo system also creates a torrent of news that draws excessive public attention to most research. Put simply, journalists should ignore most of the journal articles that they now cover so energetically. Most journal articles are but single dots in the pointillist enterprise that is the scientific method–but the breathless coverage catalyzed by the embargo system often gives the impression that each week’s paper is a major breakthrough. Journalists pay much less attention to later studies that play down the findings.

The trump card for embargo supporters is accuracy: News about science and medicine is so difficult to research and write, goes this argument, that journalists need time to do the job correctly–or the public could be harmed by inaccurate reporting. Susan Turner-Lowe, former director of public affairs at the National Academy of Sciences, describes it this way: “Journalists have traded accuracy for scoops.” Being critical of embargoes therefore is tantamount to supporting erroneous reporting.

But the fact is that many other journalists work effectively without embargoes. Consider the complexity and implications of other stories covered by journalists who do not specialize in science and medicine: the latest Supreme Court decision, a tax bill passed by Congress, a massive airplane accident, and others. Each of these stories rivals many science and medical stories in technical complexity, the difficulty that journalists may have in reaching expert sources for comment, and the impact on readers or listeners if inaccurate information is reported. Yet reporters uncomplainingly cover these and a myriad of other stories without the helping hand of an embargo.

Even Nature’s Peter Wrobel concedes that the embargo is not essential for good coverage of science and medicine. “It doesn’t require five or six days, or even three, to write most stories,” he says. Alexandra Witze, a former science reporter for The Dallas Morning News and Nature’s chief US correspondent, says that the accuracy rationale for journal embargoes is “insulting” to science journalists. “It assumes that we are incapable of doing our job, as journalists in any other field are.”

However, the majority of science and medical journalists tend to agree with journal publishers that embargoed advance access to scholarly journals promotes accurate, orderly journalism about science and medicine. This is not necessarily the case. Journalists who operate by a learned set of professional norms and practices are likely to make the same mistakes in a story whether they have a day or a week to prepare it. Moreover, an individual reporter may not use all the additional time that the embargo provides. With an embargo of several days, the reporter may work on the embargoed story in bits and pieces, fitting that story around other stories that the reporter is covering.

Journalists do have an ethical obligation to society to be accurate, but accuracy is more than the technical accuracy of figures and scientific terms. Taken as a whole, science reporting should provide an accurate picture of scientific and medical research, particularly in areas of personal importance to members of the public, such as health issues. The embargo arrangement encourages pack reporting of research from a few selected journals regardless of whether the research is truly important or definitive.

In the short run, the Internet has probably bolstered the embargo system, particularly because the World Wide Web and electronic mail have provided new tools for distributing embargoed articles to journalists. EurekAlert! in particular has been a resounding success story for embargo proponents, so much so that it has spawned imitators such as Nature’s press Web site and AlphaGalileo.

But in the long run, online communications will probably undermine embargoes on news about science and medicine. One reason is the ease with which the Internet can connect journal publishers with a worldwide cadre of journalists. More and more science and medical journalists, around the globe, are participating in embargoes sponsored by journals in the United States and Britain. Many of these journalists may not be as heavily invested in the embargo system and therefore are more likely to jump the gun when an important paper comes along.

The Internet will also weaken the embargo because it is transforming the process of scientific communication itself. Most traditional journals now offer online access to their articles, with the articles often posted long before the printed journal arrives in a scholar’s mailbox. Some journals have gone a step further, by publishing some or all of their articles online before they are published in print. Science and Nature have begun to post selected journal articles online, after they have completed peer review and editing but before they appear in print.

Scientists are also using the Web to archive and distribute preprints of their papers. With the advent of the Web, scholarly societies and even individual scholars have created databases on which authors can deposit electronic copies of their papers. Few journalists use the Web sites to plumb for news.

One who does is Tom Siegfried, former science editor of The Dallas Morning News. “There’s plenty of stuff to report out there before they appear in journals,” he says. Every night, he says, he checks physics preprint servers, because the latest research is usually reported there first. “In physics nowadays the journals have become increasingly irrelevant,” he contends, with their role largely limited to serving as the archival copies of important papers and for proving records for tenure.

The embargo system should be replaced with full and open disclosure of research results as soon as they are ready for public consumption, which generally would mean as soon as peer review is complete. Once a scholarly paper has been accepted by a journal, scientists and their institutions should be free to tell the world about it, and journalists should be free to report on it if they deem it newsworthy. The journal in question could make the accepted paper available to its subscribers online, so that the subscribers could consult the full text of the paper for themselves. Journalists would be freed of the perceived tyranny of the embargo, and they would have new-found time to visit scientists in laboratories and troll for investigative stories rather than leafing through press releases and password-protected Web sites in search of what the competition is probably going to report.

This is emphatically not to suggest that science and medical journalists should break embargoes. To the contrary, journalists have both an ethical and a legal duty to abide by agreements with their sources, including embargo agreements. But journalists are not ethically required to continue to agree to embargoes.

It is time for science and medical journalists to break out of their dependence on journals as a source of science news, and it is time for scholarly societies to stop trying to shape the flow of news in a way that suits their own political ends. The embargo should go.
Vincent Kiernan is an instructor of journalism at Clarion University of Pennsylvania. This essay is adapted from his book, Embargoed Science, Copyright 2006 by Vincent Kiernan. Used by permission of the author and the University of Illinois Press (see http://www.press.uillinois.edu/.)