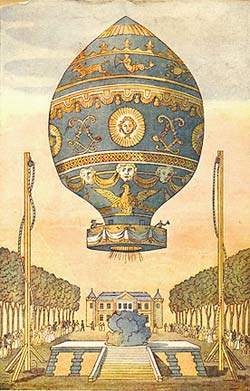 On November 21, 1783, physicist Jean Francois Pilatre de Rozier, along with the Marquis d'Arlandes, became the first humans to fly. Their flight, in a hot air balloon designed by brothers Joseph and Etienne Montgolfier, was witnessed by thousands in Paris, including the royal family and Benjamin Franklin, and soon inspired a ballooning craze.

Pilatre de Rozier was born in Metz, France, in 1754. He later became a physics and chemistry professor in Reims and a member of the French Academy of Sciences.

The brothers Montgolfier came from a large family in Annonay, France that been successful in the paper making business for generations. Working in the paper mill, the brothers noticed that smoke tended to rise, and that it could lift pieces of paper. The brothers made several unsuccessful balloon experiments indoors first. They filled a paper bag with steam, which just made the bag soggy. The brothers had heard of Henry Cavendish’s work showing that hydrogen was much lighter than air, and were eager to put that knowledge to use to lift objects into the air, but they couldn’t devise a way to contain the hydrogen.

Their first successful balloon was a bag made of paper and linen, open at the bottom. A fire held at the bottom heated the air in the bag. The heated air inside the bag expanded, making it less dense than the surrounding air, causing the bag to rise.

The Montgolfier brothers didn’t quite understand the physics involved– they believed thick smoke was the key to keeping the bag aloft, so they burned things like straw, wool, and even old shoes to produce the densest possible smoke. Not recognizing that the heat had made the bag rise, the brothers also seem to have believed at the time that they had produced a new, previously undiscovered gas that was lighter than air.

But even with their poor understanding, through trial and error they were able to produce a working balloon. After making several small-scale tests, they were ready for the first public demonstration. The ten-meter diameter balloon was exhibited on June 4, 1783. Tethered to the ground, and carrying no passengers, the balloon rose high above the marketplace at Annonay.

Sparked by their success, but too cautious to fly themselves, the Montgolfier brothers planned another demonstration, this time with a sheep, a duck, and a rooster as passengers. The flight, on September 19, 1783 in Versailles, was watched by king Louis XVI and Marie Antoinette, as well as a large crowd of fascinated Parisians. The farm animals flew about 2 miles, and returned to the ground unharmed after about 8 minutes. Though the king didn’t care for the stench of all the smoke, the flight was a success.

On November 21, 1783, the balloon was ready for the first human passengers. Although King Louis XVI said he wanted to send prisoners on this potentially dangerous experiment, physicist Pilatre de Rozier volunteered for the honor of being the first to fly in an untethered hot air balloon.

He and the Marquis d’Arlandes, who bravely agreed to accompany him, lifted off from the center of Paris, rose to a height of about 3000 feet, and drifted for about 25 minutes before landing in the outskirts of the city, about five miles from where they began.

These early balloon flights were witnessed by Benjamin Franklin, who was in Paris at the time as ambassador to France. Franklin, intrigued by the idea of flight, predicted that hot air balloons would soon be used in the military for spying. Franklin died before being able to take a balloon ride himself.

In order to keep a hot air balloon from falling out of the sky, the air had to stay hot, but that required a fire lit beneath the balloon, which meant a heavy supply of fuel had to be carried along, and had the further disadvantage that the fire tended to send up sparks that could set the balloon on fire.

Another physicist, Jacques Alexandre Cesar Charles, solved that problem by making the first hydrogen balloon. Unlike the Montgolfier brothers, Charles was able to contain the hydrogen, using rubber-coated silk. Not long after the Montgolfier’s first public demonstration, Charles successfully launched his unmanned hydrogen balloon from Paris. It flew about 15 miles, and landed in a village outside Paris, where it was attacked by frightened peasants.

Jean Francois Pilatre de Rozier also designed his own balloons, which used a combination of hot air and hydrogen. On June 15, 1785, he became the first to die in an air crash when his balloon exploded as he was trying to cross the English Channel.

Despite early accidents such as this one, ballooning became a popular recreation, and these early flights inspired aviators to design more practical types of flying vessels, eventually leading to modern airplanes. Though not very useful for travel since they are slow and difficult to steer, balloons are still often used in atmospheric, meteorological, and astrophysical research.