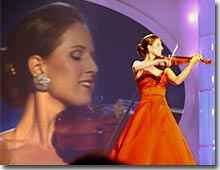 Allison Porter breaks down many stereotypes. The 24-year-old Miss Washington 2004 graduated from Harvard in 2002 with a degree in astrophysics. She also boxes, plays the violin, speaks Spanish, does biomedical research, and plans to become a doctor for the medically underserved.

Many people ask her what, if anything, ties her diverse interests together. She says everything is connected, either closely or loosely, with her goal of being a better doctor. So for instance, she learned Spanish in part because so many people in need of medical care don't speak English. Boxing is a way of keeping physically fit, something Porter believes is important, especially with the growing obesity problem in this country.

Porter also spent lots of time volunteering—she's worked in rural Mexico, educating people about disease and building stoves to reduce smoke inhalation, in Calcutta at an orphanage for disabled children, and in Ecuador with a mobile surgery unit. In Ecuador, she contracted malaria and had to go home early, but even that experience, while she admits it wasn't exactly fun, helped her to understand what it's like to be a patient, a valuable lesson for someone who wants to become a doctor.

Ever since she was a teenager, Porter has dreamed of becoming a doctor, in part inspired by her aunt's struggle with ovarian cancer. But she was also interested in other sciences. In her high school physics class, she worked with a computer program that allowed users to create a model solar system by specifying masses and velocities for several objects. Porter was especially intrigued by this activity, and she remembered it when choosing her major at Harvard at the end of her freshman year. Though she planned to go to medical school, she wanted her undergraduate years to be a chance to branch out. Porter was attracted to astrophysics because she loved the subject matter. "I think a lot of it is from just a philosophical standpoint, studying things that are much larger than we can really comprehend," she says. "I was very interested in big bang cosmology, the origins of the universe."

She also liked the astronomy and astrophysics department, which, with many professors and relatively few students, offered lots of individual attention and access to great resources. For instance, in one of her classes, Porter went to a telescope, took real data and analyzed it. "I would just show up at this telescope on a Wednesday afternoon, and my professor would show me all the buttons to press, and she'd pretty much say, 'see you later, have fun.' So I was in control of this enormous, beautiful radio telescope, and was able to collect my own data and stay as long as I wanted. That was a really special experience, and something I couldn't have done if I'd been in another major."

While in college, she started boxing as a way to keep fit during the off-season for soccer. Contrary to what many people initially think, Porter, the 2004 Tacoma Golden Gloves champion, is not a violent person at all. That stereotype is based on professional boxing, she says. Amateur boxing is safer, and more about technique than about inflicting pain. For instance, the scoring system often rewards a light tap with as many points as a heavy punch. Amateur boxers also wear headgear and more heavily padded gloves, and the referees will stop a match if it becomes dangerous.

Porter currently works as a technician in a research lab at the Fred Hutchinson Cancer Center in Seattle. Her research group studies a common phenomenon called microchimerism. During pregnancy, a small number of cells may pass from the mother to the fetus, and from the fetus to the mother. These cells, called microchimeric cells, can remain in the bodies of both mother and child for years, even decades, but researchers don't really know what effect these cells have. Porter's group, led by Lee Nelson, has proposed that these cells may be related to some autoimmune diseases, so they have been measuring levels of microchimeric cells in both healthy people and those with autoimmune disease. In addition to a better understanding of the immune system and autoimmune diseases, the research may lead to improvements in cancer treatment, says Porter, since some therapies for autoimmune disease are sometimes effective on cancer.

Last spring she entered the Miss Washington Pageant, after having investigated the Miss America program for two years. Unlike many pageants, Miss America places more emphasis on the interview and talent than on the swimsuit and evening gown events, says Porter. That doesn't mean that there isn't any truth to the stereotype. "I found that once I got to the Miss America pageant, there were of course many beautiful women there, who were there because they loved the glitz and the glamour and the makeup and the gowns and all of that," says Porter. "But there were, I think, four Rhodes scholar finalists there as well, and many women are pursuing medical school and law school, who were there to help pay their way through grad school."

The Miss America program appealed to Porter and many women like her because it encourages well- roundedness. "I was interested in it because I'm a person that has walked around never being the best at anything, but always succeeding relatively well in just about anything. And this type of competition really caters to that type of person because of the different weighting of the different phases of competition."

Porter will enter medical school next fall. In the meantime, she'll continue working at the Fred Hutchinson Cancer Center, and making appearances related to her Miss Washington platform: "Going Three Rounds in the Fight Against Cancer: Prevention, Treatment, and Funding."