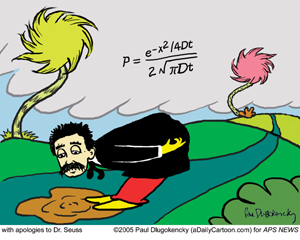 Listen my friends, and shortly you'll hear
Why 1905 was a miracle year
For that was the time that a young patent clerk
By the name Albert Einstein did incredible work.

Now this is a story that comes in three parts
And the beginning, of course, is the best place to start.
But how it begins, I confess I don't know
So I made up a lie, and here's how it goes.

One day Al was walking and stopped to look down


At a puddle that spread in his way on the ground
As he studied the muck and the mud, Albert found
That his mind wandered back to the motion of Brown.

A small bit of dust or pollen or fluff
Would dance in the water, if 'twas tiny enough.
Some thought that the motions were signs of life
But old Reverend Brown had proved that's not right.

"The way the dust jiggles and wiggles and writhes,"
Al said, "it's no wonder some think it's alive."
He sat and he pondered and grasped for some notion,
What could possibly lead to this Brownian motion?

"It's molecules," cried Albert, "too small to see
That are bumping the bits, that's what it must be.
And if water has molecules then so has that tree
And this rock and that bird, and yes, you and me!"

Well molecules and atoms at last were confirmed,
And solid state texts were rewritten or burned.
'Twas a wondrous discovery, though not without peer,
And it's hardly enough for a miracle year.

Now photons, like atoms, were once speculation,
Since light comes in waves with well known undulations.
But when light fell on metals and started a current,
Though the theories were clear, the experiments weren't.

Turn up the brightness and more electrons emerge,
While it's the color of light makes their energy surge.
How could this be? Albert knew it was wrong
If light was a wave as we'd thought all along.

Light is sometimes a wave, that much is true,
But at other times it's a particle too.
And the same goes for atoms and marbles and pigs-
It just hard to tell when things get too big.

'Twas a wondrous discovery, and now he was near.
Yes, it's almost enough for a miracle year.
One day he was dreaming and thought if he might
Travel as fast as his photons of light.

With a little deduction and persistence galore,
He thought of an answer, not thought of before.
Now light speed is constant, experiment showed,
If you move quickly or move very slow.

But if light speed is constant, it's time that must change.
The answer's the answer no matter how strange.
This one little notion, while modest enough,
Led to a whole bunch of powerful stuff.

From time dilation to lengths that contract
To the source of the sunshine and cloud chamber tracks.
And perhaps Al's most famous discovery of all
Is the simple equation that most folks recall.
E=mc2 made the fact plain
That energy and matter are one and the same.

And now there you have it, the case is quite clear
Why 1905 was a miracle year.
For in five famous papers and less than twelve months


Einstein came up with some fabulous stuff.