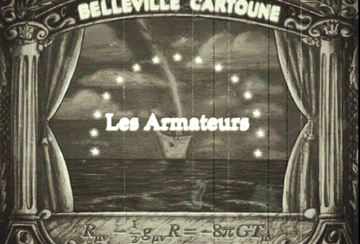 Editor's Note: In the July issue of APS News we pointed out that Einstein's field equations for general relativity appear unexpectedly under the opening credits of the animated feature film "The Triplets of Belleville," directed by Sylvain Chomet of France.

We asked our readers for their interpretation, and offered copies of the book "Physics in the 20th Century" for particularly convincing explanations.

We received many intriguing replies. We reprint some of them here, and, at the end, a communication that may, in fact, resolve the mystery of how those equations came to be featured in the film.


My girlfriend comes from a tiny town just north of Belleville, Ontario—the "big city". She is a believer in the Universe as a spiritual force—there are no coincidences and it is up to us to find the true meanings in seemingly innocuous happenings.

I am a physicist. The makers of the movie were not aware of the presence of Einstein's field equations—this image was meant for me to view in APS News so that I could cut out the picture, show it to my girlfriend, and convince her that the Universe intends for us to be together till the end of time.
Vlado Zeman
Toronto, Canada

For me the presence of the mathematical expression in the opening sequence acts as a sophisticated reference to the importance of gravity in what follows, as related to the film's subject matter (e.g. cycling), artwork (e.g. drooping faces and muscular legs), and dynamics (e.g. strained uphill climbs, falling frogs).
Michael Wall
Los Alamos, NM

The equations appear during the opening segment of the film, which is supposed to be an old cartoon from the 1930s, showing the Triplets during their salad days. This 'cartoon within a cartoon' illustrates the plasticity of our notion of time, and how a temporal journey is analogous to a spatial one. In a loose sense, Einstein's General Relativity also views space and time on an equal footing, and emphasizes their deformable nature.
Steven Stahler
Berkeley, CA

Why do Einstein's field equations appear at the foot of the screen where the credits are shown in the Triplets of Belleville?

Because Einstein is reputed to have said about them that he conceived of the theory while riding his bicycle. I love to ride, and sometimes my insights please me as well.
Samuel J. Petuchowski
Boston, MA

Django Reinhart formed the Hot Club of France in 1934; much of the music of "The Triplets of Belleville" is based on Reinhart's music.

Einstein is a member of a very famous Physics Triplet of Einstein, Podolsky, and Rosen (EPR), who published their work in 1935.

Chomet wanted to use as many triplet references as he could find from that era, but he could hardly find a way to write anything about the EPR experiment that could be easily recognizable. E=mc2 would be too easy. Einstein's field equations are really the perfect choice: cryptic to the general population (might as well use hieroglyphs) but easily recognizable by the cognoscenti.
Alain Brizard
Colchester, VT

The film makers have used quasi-subliminal insertion of key equations as their method of operation. I believe we should be on the look-out for others, such as Maxwell's equations and Newton's laws, in upcoming feature films.
Karland A. Kilian
Minot, ND

The appearance of Einstein's field equations in the opening credits of "Triplets of Belleville" has a simple explanation: It was meant to provide an exercise for the students in my excellent introductory relativity course last semester. The students were instructed to view the film and report on its relevance to the course. Only one student "got it", but she said she liked the movie anyway. It is true that I haven't actually verified the accuracy of this account with Silvain Chomet, but what other explanation could there be?
Lloyd Kannenberg
Weston, MA

I think that the equation might simply be a decoration to indicate the time the opening scene is supposed to take place in. That scene is a rousing performance by the Triplets during the vaudeville era. Josephine Baker is one of their costars.
Juan F. Lara
Clemson, SC

Perhaps it is because the film does not distinguish between space and time in the story, and this was the director's acknowledgment of Einstein's contribution to this concept. If so, hats off to Sylvain Chomet for one of the most arcane references in film history.
Myron S. Wecker
Old Westbury, NY

If you've ever had to bike up a mountain, you have probably cursed gravity. As you're pedaling away, inching up the slope, you have a lot of time to think about it. And so, you eventually find out about the field equations.

In this movie, you can see the cyclists thinking about gravity during the race.The equations are an homage to cycling.
Jeff Meth
Wilmington, DE

Although I would like to spin a dark and convoluted tale of the secret physics past of the film makers, in which frustrated graduate students flee academia and the drudgery of tensor analysis and field theory to make big money in movies, I suspect that the truth is much simpler.

"Triplets" is a brilliant piece of animated film work, and a great deal of it was done on computers. In particular, the Belgian company GRID was involved in the production of "Triplets" and they used a product called "LightWave" by NewTek. According to Jan Ebo of GRID, one of the main software plug-ins used during production is called Relativity.

Thus, I'm pretty sure that the appearance of Einstein's equations of general relativity is a little inside joke involving the software used by the animators.
David Voss
Silver Spring, MD

The only connection I can make is that both the film and Einstein are associated with bicycles; i.e. the famous photo of Einstein riding his bike around the Princeton campus.
Harold Cohen
Los Angeles, CA

The opening sequence celebrates much of accomplishments of the 1920's, at least in the view of the director. This is shown by the appearance of Fred Astaire, Josephine Baker, Paul Whiteman(?), and Django Reinhardt. I believe that the message is that GR is one of the accomplishments of that era, possibly leading to these artistic developments since the publication of the GR theory predates the artists above.
John Byrd
Berkeley CA

The following 3 people pointed us in the direction of Triplets of Belleville "Physicist in Residence" Stéphane Durand. They will each be awarded the book "Physics in the 20th Century".

I purposely stayed to the end of the credits to see if there would be any explanation. There wasn't that I was able to discern, but I did get some information—namely, one person in the credits has "physicist" in his title.

My only guess is that the equation was an "easter egg" placed by this person like what one might find in a video game, a DVD, or a website. I can, of course, provide an algorithm for how to try to get the answer: Watch the film, remember this person's name in the credits, and contact him/her.

I bet she knows the answer!
Mason Porter
Atlanta, GA

I'm currently studying undergrad physics at the University of Montréal, and had the pleasure of having Mr. Stéphane Durand, who works here at our university's Mathematical Research Center (CRM in French) as the teacher in my "Introduction to Quantum Mechanics" class. Mr Durand happens to be a good friend of the creator of the movie, and told us he was even invited all the way to France to see one of the first showings. He also told us to look closely at the opening scene of the movie, where the piano being played has the inscription "S. Durand" on it, as a discreet homage to his friendship with the movie's creator. He did not tell us about Einstein's field equation but I believe that its presence there can be easily explained by a moviemaker's friendship with a physics enthusiast.
Kevin L. Smith
Montr‚al, PQ

The culprit guilty of high treason against the scientific community could well be a physicist named Stéphane Durand. Friend of the director Sylvain Chomet and researcher at the Centre de recherches math‚ matiques (CRM), he is involved mainly in scientific popularization and teaches physics courses at the Université de Montréal and in high school.

He also occasionally works as a consultant for scientific programs on television and contributes to magazines.

To my knowledge, the appearance of physical equations would be one of the many pranks or jokes contained in the cartoon and intended for a limited circle of initiates. Among others, one of the pianos in the cartoon apparently bears the brand name "S. Durand".
Attila
Fléau de Dieu
(not the author's true name; the real "scourge of God" died in 453 AD —Ed.)

And now, a communication from Stéphane Durand himself:
Sylvain Chomet, the filmmaker, is one of my best friends. He lived for ten years in Montréal, but then moved on to Europe. He was fascinated with modern physics, and I spent a lot of time talking physics with him. He was particularly impressed by the huge amount of information condensed in some formula, especially in the main equation of GR governing the evolution of the entire cosmos from the big bang to its final fate.

So, he simply decided (with his chief decorator) to display it in the opening scene. That's it (I think).