October 1807: Invention of the camera lucida 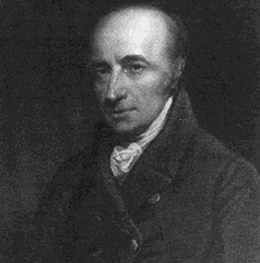 Unusual optical effects have long fascinated both scientists and artists alike. Take, for example, the camera obscura. In its simplest form, the camera obscura is little more than a small hole in a shade or a wall, through which light passes from a sunlit garden, for example, into a darkened room, projecting an inverted image of the scene onto a wall opposite the hole.

An artist could tack a piece of sketch paper to the wall and trace the key outlines of the subject, then complete the painting. The 17th century Dutch painter Johannes Vermeer (1632-1675) is believed to have used the camera obscura. Later artists, such as Ingres (1780-1867), most likely used the camera lucida, an optical artist's aid invented by an English physician named William Wollaston in 1807.

Born in Norfolk in 1766, Wollaston was educated at Cambridge University, and started a medical practice in 1789. He also established a private laboratory to conduct research at the Royal Society in 1793. He quickly earned a reputation in physiology, describing the main components of urinary calculi in 1797.

But then he failed to obtain the vacant position he wanted, and abruptly abandoned his medical practice in 1800 to devote more time to scientific research. He was also becoming partially blind, which may have spurred his interest in optics. So he became an associate of Humphrey Davy at the Royal Institute, and in 1809 identified a new type of bladderstone that he dubbed "cystic oxide (now known as cystine), as well as the first known amino acid in 1812.

He was also the first to report the dark lines in the spectrum of the Sun, and he improved the design of Volta's battery by joining several cells together to make larger batteries.

Wollaston formed a partnership with another scientist to conduct experiments in chemistry, particularly the production of platinum. In the course of his research, Wollaston discovered two new metals: palladium and rhodium. Eventually he developed a process to produce malleable platinum in 1805, which made him a comfortable fortune by 1826, thanks to the usefulness of the technique in industry.

His work in optics began in 1802, when he developed the refractometer, an instrument for determining refractive indices. He followed this with the invention of a reflection goniometer in 1809 to measure angles on crystals.

Astronomer John Herschel declared, "This simple, cheap and portable little instrument has changed the face of mineralogy and given it all the characters of one of the exact sciences." Wollaston also designed a special type of prism that acted as a polarizing beam splitter, made from calcite or quartz, and worked extensively in designing lenses. All of this would ultimately feed into his design for the camera lucida.

The camera lucida consisted of an extendible telescopic tube in three pieces, containing a reflecting prism and sighting lens, mounted on a stick that could be attached to a drawing table or surface. The device was more portable than the camera obscura and a darkened room was no longer needed; the artist could work in direct sunlight. The prism had four sides, with one at a right angle, two at a 67.5° angle, and one at a 135° angle.

These numbers were the result of careful experimentation to produce critical angles of reflection. The prism was deliberately shaped and oriented so that the rays of light from the scene were reflected twice within the prism before reaching the eye. This way, the eye sees the image the right way up, rather than inverted, as with the camera obscura. When the stand is adjusted so that the prism half covers the pupil of the eye, the draftsman has the illusion of seeing both the object he wishes to draw—which is reflected through the prism—and its outlines on the drawing board.

The camera lucida requires considerable skill to use, since it doesn't actually project an image of the subject onto paper; the image seems to appear on the drawing surface only when the artist looks in the prism. A slight movement of the head will cause the image to move also, disrupting the accuracy of the tracing. The modern version is remarkably similar in concept and structure, using a half-silvered mirror to achieve one of the two required reflections, so that the viewer can see both the reflected scene and also the view directly through the mirror, as if it were plain glass.

Wollaston is described in contemporary accounts as being pleasant in appearance and very polished and refined in manner, but he lived alone and worked in rigid seclusion. He died of a brain tumor on December 22, 1828. The mineral wollastonite was named in his honor.