By Lyudmila Zaitseva and Friedrich Steinhausler

The issue of covert trade in nuclear material gained public prominence when it was erroneously claimed by British intelligence sources that the former Government of Iraq under Saddam Hussein had tried to obtain uranium from Niger. The far reaching consequences of such assessments for society were clearly demonstrated by US President George W. Bush in his speech on January 28, 2003, using this incorrect information as one of the reasons why terrorists and countries belonging to the "Axis of Evil" posed a potential nuclear threat.

In view of the occurrence of such significant errors even in the intelligence community, it is not surprising that information in the media on the topic of illicit trafficking of nuclear material is frequently flawed by errors.

Examples of such errors include failure to differentiate nuclear weapons-usable material from other radioactive material, incorrect use of physical units of activity and dose rate, and misquotation of isotopic characteristics and enrichment levels.

Since the terror attacks on September 11, 2001, many publications envisaged doomsday terrorism scenarios, including the deployment of a nuclear device as a potential threat to society. Although this possibility can no longer be excluded, the probability for it to actually happen is relatively low.

Nevertheless, the issue of losing control over weapons-usable nuclear material has gained prominence in the debate on national security in several countries. Positions in this debate are frequently based on questionable intelligence rather than facts.

This undesirable situation is largely due to the fact that information on illicit trafficking of nuclear material is often associated with a high level of secrecy. In addition, there is a noticeable lack of sharing of relevant information among all parties involved due to the security-sensitive nature of the data and the justified concern by the security community not to reveal any weakness in the physical protection system for nuclear material.

The probability for losing control over nuclear material depends on the amount of material to be secured, the number of storage sites, and the level of physical protection provided by the facility operators. Large quantities of nuclear weapon-usable material are stored at each of several hundred facilities worldwide. About 1,665 tons of highly enriched uranium (HEU) and 147 tons of plutonium are stored for military uses worldwide. 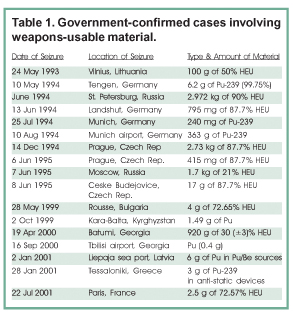 Seventeen of these incidents were confirmed by member states to the International Atomic Energy Agency (IAEA) (See table 1). Eight other highly credible cases were not officially reported to the IAEA Database Program for reasons unknown to the authors, although they have been publicly confirmed by state officials.

A total of 39 kg of HEU and plutonium were intercepted during illicit transit, sale, and diversion attempts since 1992. In addition, a cache of 90% HEU reportedly disappeared from a research facility in Abkhazia, a break-away province of Georgia, during the military hostilities between 1992 and 1997. The whereabouts of the material are still unknown. In most of the 25 incidents, the material was stolen or is suspected to have originated from nuclear facilities in Russia.

The first theft of weapons-usable material was noted in Russia in 1992, soon after the collapse of the former Soviet Union, accompanied by an economic downturn and impoverishment of the nuclear sector. An engineer involved in the material weighing and accounting procedures at Luch Scientific Production Association diverted almost daily gram amounts of 90% uranium, which were below the detection limits.

Over a four month period of the nuclear facility. He had accumulated 1.5 kg of the material. He was arrested by pure chance at a train station in Podolsk on his way to Moscow, where he intended to find a buyer for the HEU. The thief admitted that he had hoped to sell the material for about US$500, so he could buy a new stove and a refrigerator.

Once an elite of the Soviet society, nuclear scientists were suddenly faced with dramatically decreased funding, low wages delayed for months, and bleak prospects for the future. As a result, the security of nuclear material became very vulnerable to the so-called "insider" threat from facility employees, who wanted to improve their financial situation by stealing the material and trying to sell it. In all credible thefts of weapons-usable material known to date, the material was diverted by insiders with access to fissile nuclear material acting both on their own initiative and upon requests by other individuals.

In five out of the six thefts, the material was stolen with the purpose of selling it for profit, although, like in the Podolsk case, the perpetrators had only vague ideas as to where to find a buyer.

Involvement of organized crime groups could be a key factor in a successful transfer of diverted weapons-usable material to the end-user in view of their logistical capabilities in the smuggling of weapons, drugs, and people. Therefore, it is very encouraging that no apparent links to organized crime have been identified in any of the 25 smuggling cases. Also, no hard evidence has been found to link any of these cases to specific end-users, such as rogue nations or terrorist organizations, which remain the least known link in the nuclear smuggling chain.

In order to judge the validity of the current threat assessment, it is essential to also address the inherent uncertainties in the data used for the analysis, such as:

Until now, only 25 highly-credible cases of illicit trafficking in weapons-usable nuclear material have become known since recording of such incidents was started in 1991. By comparison, there have been over 800 cases involving illicit trafficking in other nuclear and radioactive material, such as low-enriched uranium, yellowcake, and medical and industrial radiation sources, during the same period of time.

The inherent uncertainties in our current knowledge on nuclear smuggling make it difficult to judge whether trafficking in weapons-usable nuclear material is really such a relatively rare phenomenon, or whether it was and still is carried out in such a clandestine, professional (in criminal terms) manner that it remains largely undetected.

In either case, it is essential to improve our current understanding of the true magnitude of illicit trafficking in nuclear material, since national security and international stability heavily depend on the correct threat assessment.

Lyudmila Zaitseva established jointly with Friedrich Steinhauslern the Database on Nuclear Smuggling, Theft and Orphan Radiation Sources (DSTO) as a Visiting Fellow at the Center for International Security and Cooperation (CISAC), Stanford University. Friedrich Steinhausler, chair of biophysics and physics at the University of Salzburg, Austria, is Director of the Government Radiological Measurements Laboratory, Salzburg