Oversupply, Undersupply: Can We Ever Get Workforce Issues Right?

There are two strident voices in the workforce debate. The first claims we don't have nearly enough scientists and engineers. The second (usually articulated by jobless scientists and engineers) claims we already have too many. Last year a Wall Street Journal article espoused the first view, quoting the President of the National Academy of Engineering in support of its arguments. Boy, did the NAE President hear from the holders of the second view-in spades.

How can both sides be right?

In my opinion, the answer is relatively simple. We have a vibrant, well-tested system for producing scientists and engineers in this country. It is called federal R&D funding. 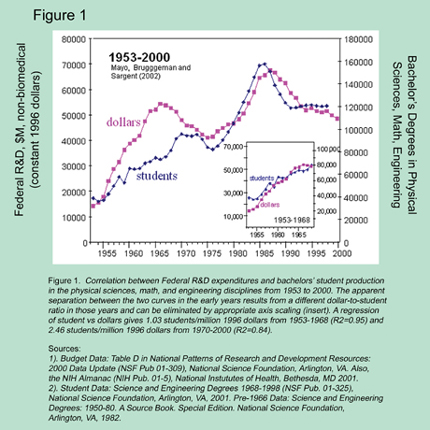 As Figure 1 shows, there is an extremely strong correlation between the R&D funding that the government issues every year, and the number of bachelors students produced
-at least in the physical science, math, and engineering disciplines.

A more eloquent economic framework by Goldman and Massy makes the same case for S&E students at the PhD level. The problem, as it were, stems from the fact that federal R&D funding?which sets up domestic student supply-operates completely independently of any indicator or driver of "demand. "It is difficult to find any economic indicator-and we tried several-that correlates at all with student output to any degree of fidelity.

Given this situation, it seems the rational thing to do would be to design an S&E workforce system where supply meets demand, where all workers get jobs and all jobs have workers. What would such a system look like? One appealing thought is that we could predict worker demand and then adjust congressional R&D appropriations accordingly.

Unfortunately, this solution makes two unfounded assumptions: 1) that scientists can control Congress and 2) that scientists have a model that accurately predicts worker shortages and surpluses.

The better approach is to simply "go with the flow." Forget about prediction and preemptive measures: just design a responsive system where the student production continuously and automatically readjusts to workforce demand, whatever that demand is at the moment.

In other words, reestablish the lost feedback loop between student supply and worker demand, so that federal R&D funding does not become the only input to student production.

First, there needs to be a mechanism by which students continuously receive input from the job market?not just at the career services interview table, after four years of education have already gone by. The blandishments of well-funded professors, though much more constant in a student's life, also do not qualify as "information about the job market." A "hot" field in the research market does not easily translate to a "hot" field in the nonacademic job market, since basic research is usually five-25 years out from production.

One way to accomplish a job market reality-check for undergraduate students is to establish a tradition of student summer jobs in industry as part of the curriculum. There's nothing like trying to find a summer job and realizing no one wants your intended specialty to think about changing your direction to match the market.

In addition, a summer job experience lets you know quite viscerally that the courses you really needed to have had were design of experiments and statistics, not dislocation theory. As a professor, I discovered that India's IIT system was a mother lode of truly excellent graduate students. That system requires integrated academic plus industrial training of its undergraduates. So, integrated training is not only useful for those undergraduates who enter the workforce immediately upon graduation, it is also useful for undergraduates who wish to pursue advanced degrees.

At the undergraduate level, one also needs to recognize that the economy, and hence the job market, has a time constant much shorter than the average four year degree. Even if a student has a way of knowing that a particular field has a strong vacancy rate, and begins studies in that field, the vacancy rate can change dramatically by the time he/she graduates. Thus, there is a strong need to reduce the time constant associated with the degree to match the time constant of the job market. This can be done by delaying the choice of a major until the senior year?one year out from the job market, rather than four. This should cut down on hysteresis effects and the concomitant four year transients in undersupply/oversupply swings relative to the market, as observed by labor economists in many fields.

It will also give the undergraduate three years in which to develop a deep but flexible skill set that can be used for any technical job. In the engineering disciplines, such a curricular overhaul becomes much more possible under the Accreditation Board for Engineering and Technology (ABET) 2000 accreditation guidelines. Earlier ABET regulations prescribed exact sets and sequences of courses for a department's degree program to be accredited. Under ABET 2000, the rigid course requirements for engineering majors are gone. Instead, the department must establish its own educational outcomes metrics and prove continuing improvement in its students' accomplishments as measured by those metrics. Though some complain that these standards are in fact no standards at all, they do provide the flexibility for an enterprising department to completely abandon old "course quota" paradigms and strike out on a path that leads to greater employability of its graduates. Conveniently, the greater student employment rates would qualify as an ABET 2000 outcomes metric.

At the graduate level, the lack of feedback between supply and demand stems not only from the amount of R&D funding in each field, but the mechanism of that funding. A large fraction of graduate students receive federal funding in the form of research assistantships on federal grants. They take and the projects they work on are all tightly directed towards their advisor's end goal of getting the next grant, since it is the advisor who is paying the way. Separating the student' s funding from the professor's funding?in the form of portable fellowships?gives the student the economic independence to pursue those training paths most likely to result in a job.

While the replacement of assistantships by fellowships is an often-voiced cure for undue academic self-replication (and jobless students), it has never been implemented by the federal agencies on a grand scale. A fear of unintended consequences keeps a wholesale transformation of the system from occurring, and budget arithmetic prevents the simple addition of large numbers of fellowships to the existing assistantships.

However, a median path might be to take existing grants and separate them into two parts: the first part, containing the stipend and tuition, would be sent to the receiving department to be used as a portable fellowship for a worthy student.

The second part, containing all the supplies, professorial salary, and research equipment support, would be sent to the research account of the grant-winning professor.

This scheme allows students to gain enough economic independence that they can chart a learning experience best suited to maximize their own chances of economic success, rather than their professors'.

If done well, the economic separation of student and professor may even benefit the department: the scheme could be arranged so the department obtains a federal agency commitment for student slots well ahead of the admission decision deadline. That would be a true luxury.

Beyond graduate school, one must look towards periodic retraining as a method of keeping people in registry with the ups and downs of the job market. Multiple education treatments per career are the logical next step in an educational progression that has progressively shortened itself to match technology cycles. The earliest technical trades?e.g., goldsmithing, fletching, masonry?had time constants measured in multiple generations. Fathers would teach sons, because the underlying technology changed little from generation to generation.

When the industrial revolution arrived, the time constant of technology shifted to about one generation in length. Suddenly it made sense to send one's offspring to a university, because the technology changed completely about every thirty-fifty years.

Come the information revolution, and we find that the time constant of technical knowledge has again shifted. A once-per-lifetime degree no longer makes sense, when a complete turnover in technology occurs in a fraction of a lifetime. It is not surprising that the EE's and the IT workers have felt the pangs of forced obsolescence first and most strongly.

Eventually all disciplines will find that a single degree earned in one's youth no longer suffices for a lifetime of employment. The university system will have to adapt, perhaps offering accredited degrees in the form of "specialization modules." These would be one year, accredited "capsule" degrees, equivalent to the final year of specialization in an undergraduate curriculum?but without requiring the prior three years of effort demanded of first degree earners.

The prescriptions so far attempt to link the domestically educated workforce to domestically available demand?yet we live in a global world, where both people and jobs cross borders with increasing ease. How do we deal with the addition of the foreign-born, foreign educated into the workforce equation? We can take the same theme?trying to establish a feedback loop between supply and demand?and extend it to visa policy. At present, our visa ceilings are set by political factors. If enough interest groups complain, the visa ceilings go up (or down). If no one complains, the visa ceilings stay where they are.

However, the sensitivity of visa policy to political factors results in large waves of immigrants at times when there may or may not be jobs for them (or for the folks already in the US).

A more logical approach might be to establish an advisory board of labor economists that can watch domestic labor market indicators for shortages or gluts (usually reflected in rising or falling salaries, unemployment rates, etc.), and continually adjust visa allotments to keep the labor market on an even keel.

Merrilea J. Mayo is president of the Materials Research Society. She would like to recognize the contributions of Bill Joyce to several of the ideas in this column, most notably the reduction of effective time to degree, the value of summer jobs as feedback loops, and the concept of packaging continuing education into one year modular degrees.