Blume is Co-Recipient of Compton Award 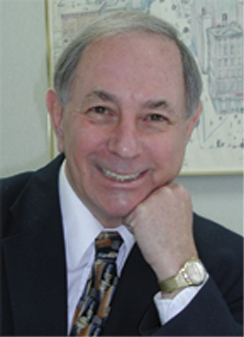 Intended to recognize an important technical or scientific accomplishment at, or beneficial to, the photon source, the award honors these men for "pioneering theoretical and experimental work in resonant magnetic x-ray scattering, which has led to important applications in condensed matter physics."

Magnetic resonance scattering was first predicted in 1985 by Blume in a seminal theoretical paper in the Journal of Applied Physics, in which he derived the magnetic scattering cross section in a quantum mechanical formalism readily understandable by experimentalists. The effect was first observed experimentally by Namikawa and colleagues at the Photon Factory in Tsukuba, Japan.

Their work was carried out with synchrotron radiation tuned to energies close to the K absorption edge of nickel, and clearly demonstrated a resonantly enhanced magnetic cross section at that edge.

Large resonance enhancements, which put resonance scattering into the consciousness of the synchrotron community, were observed in 1988 at the Cornell High Energy Synchrotron Source by a team led by Gibbs and McWhan, and their ensuing paper on the subject had a profound influence and impact on the x-ray and magnetism communities, clearly establishing x-rays as a viable alternative to neutrons for the study of magnetic structure.

The technique has since blossomed to such an extent that every major synchrotron source in the world, including the Advanced Photon Souce, now has one or more beamlines dedicated to resonant magnetic scattering, an explosion driven in large part by the work of Blume, Gibbs, Namikawa, and McWhan.

Blume delivered the Compton invited lecture on behalf of all the award recipients at the opening session of the Advanced Photon Source's 12th User's Meeting on April 30. While expressing his delight at being honored with the award, Blume acknowledged the contributions of other deserving scientists who were omitted, most notably James Hannon and George Trammel.

"They are outstanding physicists who were very much responsible for a number of key ideas in the theory of resonance scattering, many of which were originated by them in papers on Mossbauer scattering by nuclei dating back to the 1960s," he said. "I do hope they will be recognized in the future for their many important contributions to these and other fields."