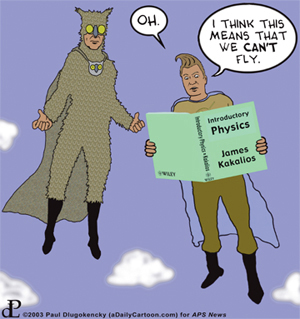 Each year physics professors ask themselves the same question: How can I make introductory physics more exciting for my students?

As he told a rapt audience at the March APS meeting in Austin, James Kakalios—a professor of physics and the director of graduate studies at the University of Minnesota—chooses to capture his students' attention by using comic book heroes to explicate the basic principles of physics and astronomy.

"Students find it much more interesting to determine Spider-Man's centripetal acceleration as he swings on his webbing, and to talk about the tensile strength of a real spider's web, than to describe a weight on the end of a twirling string," said Kakalios.

He uses comic books from as far back as 1938 and clips from recent films such as Spider-Man (2002) and The X-Men (2000). His classes attract a wide variety of students, including many who are not comic book fans, but enjoyed physics in high school and sought an enjoyable way to continue their physics education.

Kakalios developed his unique way of teaching introductory physics when he used a story concerning the death of Spider-Man's girlfriend as an exam problem in a freshman physics class. Knocked from the top of a bridge tower by the Green Goblin, she fell to her apparent doom until stopped suddenly by Spider- Man's webbing, yet was revealed to have died nonetheless. Kakalios' students used the principle of conservation of momentum to find that the force the webbing exerted on her was over 10g's, and thus her death was physically plausible.

Kakalios spoke as part of the Thursday evening session in Austin on "The Physics of Comics, Baseball and Hollywood" along with Robert Adair and Lawrence Krauss. During Kakalios' talk he described how, using basic force equations, his students calculate the force Superman needs in order to leap a tall building in a single bound.

Turning next to Newton's law of gravitation and astrophysical phenomena, he argued that if the source of Superman's strength was the larger gravity on his home planet Krypton, then one could build a planet with such a large gravity, but it would be difficult to keep an explosion from occurring. "The comic book authors got the science right, but only by accident," said Kakalios.

Kakalios is clearly a fount of information about comic book heroes, especially to those who haven't followed the history of the art. On Thursday night at the March meeting, he pointed out that in the first years of Superman comics, the writers gave voice to the revenge fantasies of their Depression era readers. "Superman's early foes were not bank robbers or world conquerors, but rather slumlords, sweatshop owners, crooked politicians and Washington lobbyists."

Dan Dahlberg, also a professor of physics at the University of Minnesota, attended Kakalios' talk in Austin. Even though they work in the same department, this is the first time Dahlberg saw Kakalios' examples laid out in detail. He plans to adopt some of Kakalios' methods. "I'm really excited to try it out in class," he said.

Anne Catlla, a graduate student at Northwestern University, was struck by Kakalios' obvious enthusiasm for both comics and teaching. "He caught all of us up in the stories and the science behind them. Everyone wanted to know where the comics were right and wrong, but we also wanted to see how the physics fit into the context of the comic book story.I can see why his students would be caught up by his interest, too."