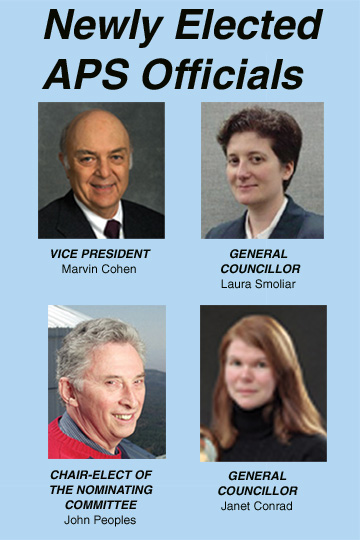 In the 2002 general election, APS members have chosen Marvin Cohen, a professor at the University of California, Berkeley, and senior scientist at the Lawrence Berkeley National Laboratory, as the next APS vice president in the 2002 general election. He will assume office on January 1, 2003, becoming president elect in 2004 and APS president in 2005. The APS president for 2003 will be Myriam Sarachik (City College of New York).

In other election results, John Peoples of Fermilab was chosen as chair-elect of the APS Nominating Committee. Janet Conrad of Columbia University and Laura Smoliar of Lightwave Electronics were elected as general councillors.

Cohen professed himself "delighted" to be elected as APS vice president. He was born in Montreal and moved to San Francisco when he was 12 years old. He was an undergraduate at Berkeley and completed his PhD at the University of Chicago in 1964. After a one year postdoctoral position with the Theory Group at Bell Laboratories, he joined the Berkeley physics faculty. He became university professor in 1995. He has also been a senior scientist at the Lawrence Berkeley National Laboratory since 1995.

Cohen's current and past research work covers a broad spectrum of subjects in theoretical condensed matter physics. He is best known for his work with pseudopotentials with applications to electronic, optical, and structural properties of materials, superconductivity, semiconductor physics, and nanoscience. Cohen is a past recipient of the APS Oliver E. Buckley Prize and the APS Julius Edgar Lilienfeld Prize. In 2002 Cohen received the National Medal of Science.

He has served as a member and then chair of the Executive Committee of the APS Division of Condensed Matter Physics, as the US representative on the IUPAP Semiconductor Commission, and as a member of the National Academy of Sciences Govern- ment-University-Industry Research Roundtable. Cohen has also served on a variety of national and international boards and committees as an advisor and advocate for science education. He was vice chair of the NAS-GUIR Working Group on Science and Engineering Talent emphasizing the recruitment of women and minorities. He was a featured speaker for the Electron Birthday Project (televised to US high schools) and is currently active in lecturing to lay groups, K-12 students, and industrial groups.

Cohen's interest and experience in education and outreach is reflected in his candidate's statement, in which he identified the promotion of physics education as a primary objective for his tenure in the APS presidential line. "We've seen discouraging trends in the number of students choosing physics majors worldwide during the last few years," he said. "The APS must try to help in the recruitment into physics of qualified students, and take a prominent role in improving physics education, especially at the pre-college level."

He also emphasized the importance of the Society's role in advising policy makers regarding federal funding for science, and in providing the best science-based recommendations in such areas as security, commerce and human welfare. "I love physics and want to promote it," he said. And despite all the talk of biology taking precedence in the 21st century, he believes physics is "still the central science, with huge applications in biology, chemistry and engineering. I think its future is as exciting as its past.

Peoples is a senior scientist in the Fermilab Experimental Astrophysics Group and director of the Sloan Digital Sky Survey. He received his PhD in physics in 1966 from Columbia University. He was an assistant professor in physics at Columbia from 1966 to 1969 and at Cornell University from 1969 to 1972. He joined Fermilab in 1972 and during the next 16 years he was engaged in the construction and management of experimental facilities and accelerators for high-energy physics. He served as deputy director in 1988 and director from 1989 to 1999. He was appointed director emeritus in 1999, and chaired the APS Division of Particles and Fields in 1984 and the APS Division of Physics of Beams in 1999.

In his candidate's statement, Peoples cited the need for the Society's elected leadership to provide a clear vision for the APS and its role in diffusing the knowledge of physics both in the physics community and society at large. "Our leaders must be advocates for the physical sciences in these times when the nation's research portfolio is changing... . At the same time, they must reflect the diversity of present and future members and the citizens of our nations," he said. And as chair-elect of the APS Nominating Committee, "I will do my best to persuade the most able of our members to stand for election in these offices."

Conrad was born in 1963 in Wooster, Ohio. She received her PhD in physics from Harvard University in 1993. Since that time, she has been associated with Columbia University and is presently an associate professor. Conrad's research focuses on using neutrinos as tools to search for beyond-the-standard-model physics signatures. She was given the Marie Goeppert-Meyer Award in 2001 for her leadership in the search for neutral heavy leptons at the NuTeV deep inelastic neutrino scattering experiment at Fermilab. She was a cofounder and is co-spokesperson of the MiniBooNE neutrino oscillation experiment. Conrad has been active in the APS since she was a graduate student.

Conrad said she is looking forward to a "rewarding and interesting experience" as an APS general councillor. Her goals include further enfranchising the younger members of the physicists' community, increasing the society's efforts to communicate the excitement of physics research to the public, and maintaining balanced federal support for physics. "Physics is a wonderful and startling field, and I want to be a part of sharing the news," she said. "I think the APS Council plays an important role in influencing the national discussion on science policy and education, and I see my position as a way to do my part in increasing the visibility and vitality of the field."

Born in New York City, Smoliar earned her PhD from the University of California, Berkeley. She has worked in Silicon Valley since September, 1996. Initially she worked in the data storage industry at Seagate Technology. In 1998, she cofounded a start-up working on three-dimensional laser-based displays, where she built a development group in photonics materials for upconversion displays. She then worked on a MEMS technology called the Grating Light Valve (GLV) for laser projection display, before deciding to invest her efforts in driving laser development to meet the needs of the laser display community. She was recruited by Lightwave Electronics, a small privately-held photonics company in Silicon Valley, to lead a development program aimed at the display industry. At Lightwave, she manages a multi-disciplinary group of engineers and physicists, working very closely with development partners in Asia and Europe. Smoliar has been very active in the APS Forum on Industrial and Applied Physics.

Given her industrial background, Smoliar understandably emphasized that aspect in her candidate's statement, calling for the APS to do even more to bridge the gap between the physics community and the world of technology companies, many of which may not fully realize the enormous value of having a physicist on staff. "I think my election is timely, since there is a real opportunity for the APS to aid industrial physicists and graduates first entering the job market who are facing a tough economic climate in the technology sector, she said. "My background will enable me to make special contributions in bridging the gap between industry and academia, and I feel very honored to have been elected."