Variations on a Theme by Dirac 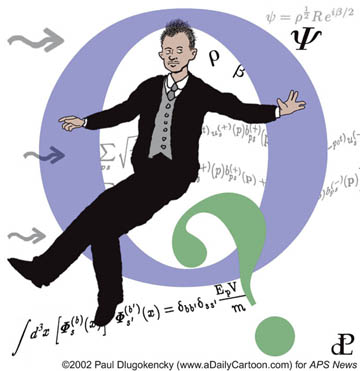 The following poem was composed by Braulio Gutierrez-Medina, a graduate student at the University of Texas. It is compiled from works by two other authors: the non-italic script is from the book "The Physicist's Conception of Nature" by Jagdish Mehra; the italic script is by Dirac himself, and comes from his Nobel lecture and from his book "Principles of Quantum Mechanics".

My first meeting with Paul Dirac took place in Cambridge in 1955.

The new theories, if one looks apart from their mathematical setting, are built up from physical concepts which cannot be explained in terms of things previously known to the students, which cannot even be explained adequately in words at all.

I had just returned to England after a couple of years with Heisenberg in Göttingen.

The amount of theoretical ground one has to cover before being able to solve problems of real practical value is rather large, but this circumstance is an inevitable consequence of the fundamental part played by transformation theory and is likely to become more pronounced in the theoretical physics of the future.

A historian friend of mine in Cambridge, knowing of my great hero worship for Professor Dirac, offered to take me with him to St. John's College, which was also his college, and to dine at the High Table.

Let us see how the basic ideas of quantum theory can be adapted to the relativistic point of view that the four dimensions of space-time should be treated on the same footing.

I went with him, and true to his word, he showed me that Professor Dirac was sitting there.

These quantum equations are such that, when interpreted according to the general scheme of quantum, dynamics, they allow as the possible results of a measurement of W either something greater than mc2 or something less than -mc2.

We thus see that our equations allow for two kinds of motion for an electron, only one of which corresponds to what we are familiar with.

The weather outside was very bad, and since in England it is always quite respectable to start a conversation with the weather, I said to Dirac, "It is very windy Professor."

Thus in allowing negative-energy states, the theory gives something which appears not to correspond to anything known experimentally, but which we cannot simply reject by a new assumption.

He said nothing at all, and a few seconds later he got up and left.

We must find some meaning for these states.

I was mortified, as I thought that I had somehow offended him.

Any unoccupied negative-energy state, being a departure from uniformity, is observable and is just a positron

He went to the door, opened it, looked out, came back, sat down, and said "Yes."