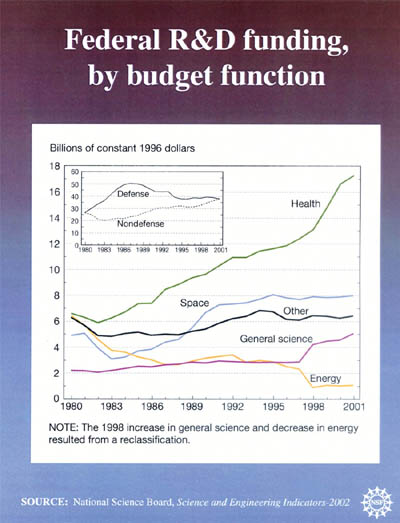 The physical sciences have been gravely under-funded relative to the life sciences in recent years. This was the conclusion, drawing on data contained in a report released by the National Science Board (NSB) at the end of April, that was reached both by the vice-chair of the NSB and by the chair of the NSB subcommittee that oversaw the preparation of the report.

The report, entitled "Science and Engineering Indicators 2002" is the fifteenth in a biennial series that is prepared by the National Science Foundation and submitted by the NSB (which is the governing board of the NSF) to the President. In two thick volumes, it contains a compilation of data on a wide variety of science-related subjects from education to funding to the position of the US in the global marketplace.

"On balance we're investing less in physical science and engineering and that gives me concern," said Anita K. Jones, Professor of Engineering and Applied Science at the University of Virginia and the Vice Chair of the NSB. "Disciplines are interdependent-you can't just make advances in one. They're strongly intertwined." The relative funding levels of the various disciplines are shown in the graph, which is taken from the NSB report.

Richard A. Tapia, Professor of Computational and Applied Mathematics at Rice University and the Chair of the NSB Subcommittee on Science and Engineering Indicators, said the government was being "very myopic regarding how much we've cut back on the physical sciences." He noted that other countries are now spending significantly more proportionally on the physical sciences, and predicted "we won't continue to be the best in a lot of these areas.

"In illustrating how disciplines are intertwined, Jones pointed out that life expectancy has risen from 46 years to 76 years in the US over the last century. One might think that reflects mostly advances in medicine, but 2/3 of this increase is due to improved sanitation, in particular improved sewage and water purification systems. "That's engineering," she said.

Tapia, who is also an adjunct faculty member at the Baylor College of Medicine, said that many of his colleagues there are desperate to get help from computational scientists to interpret their data. But because of under-funding there is a shortage of such scientists, and the MD's often end up crying out in vain. The complete Science and Engineering Indicators 2002 is available from NSF at http://www.nsf.gov/sbe/srs/seind02/start.html