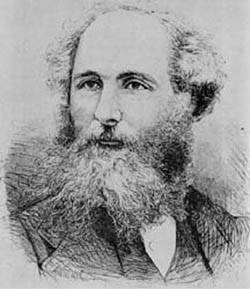 The notion of perpetual motion machines - i.e., something capable of operating forever on a fixed supply of energy - has proven seductive. The U.S. Patent Office is inundated each year with applications for such devices, most of which it can reject out of hand thanks to the laws of thermodynamics. But one of the trickiest, and most famous evasions of the laws of thermodynamics was proposed by physicist James Clerk Maxwell, one of the pioneers of statistical mechanics, best known for the equations of electricity and magnetism that bear his name. Born in Edinburgh, Scotland in June 1831, Maxwell displayed a natural curiosity about the physical world at an early age, wanting to know how things worked even at the age of 3. He attended the Edinburgh Academy, where he emerged as a brilliant student, winning prizes for mathematics and English verse.

At 14, he wrote his first paper describing oval curves, which was presented to the Royal Society of Edinburgh. He then studied mathematics and natural philosophy (physics) at the University of Edinburgh, publishing papers on the theory of rolling curves and the equilibrium of elastic solids, before moving to Trinity College at Cambridge University, earning a degree in mathematics in 1854.

Maxwell held various teaching positions before settling into the chair of natural philosophy at King's College in London, a six-year tenure where he did his most important experimental work on electromagnetism and studied the kinetic theory of gases.

In the latter, he demonstrated that molecules at high temperature have only a high probability of moving towards regions of low temperature, a more statistical approach than the concept that viewed heat as flowing inexorably from hot to cold.

To illustrate this point, in 1871, Maxwell proposed an intriguing thought experiment involving a clever microscopic creature, poised at a pinhole in a baffle dividing an insulated box into two equal chambers. The creature would try to wring regularity out of the randomness of molecular motion by picking and choosing among the motions. Specifically, it would sort molecules in such a way that the hotter (faster) molecules would be directed into one chamber while cooler (slower) molecules would be directed into the other.

Dubbed "Maxwell's Demon", this imaginary sorter itself requires energy to operate, and thus the segregation of hot from cold cannot really occur as described.

Nevertheless, the experiment is an excellent demonstration of entropy: Maxwell's demon manages to decrease the entropy, increasing the amount of energy available by increasing its knowledge about the motion of the molecules. But the laws of thermodynamics dictate that one can only increase entropy, or rather, one can only decrease it in one place if this is balanced by at least an equal increase somewhere else.

Real-life versions of Maxwellian demons - with their entropy lowering effects balanced by an increase of entropy elsewhere - do occur in living systems, such as the ion pumps that make our nervous systems work. And such molecular-sized mechanisms are also being explored in the new field of nanotechnology as scientists seek to put random molecular motions to good use.

In 1997 researchers at Boston College synthesized the first molecular ratchet, and have since been working to turn the rotor into a motor. Nanoforklifts are also envisioned, in which a particle would wriggle forward, encounter a desired molecule, and latch onto it. And as early as 1980, Charles Bennet of IBM argued that Brownian motion could be the basis for a computer, which would use jiggling to drive signals through, reducing voltages and heat dissipation.

More recently, a 1999 experiment conducted at the University of Essen in Germany yielded an initially surprising result: agitated sand in a two-chamber vessel (with the two halves connected by a hole) did indeed segregate, with the "hot" quickly moving sand migrating to one side and the cool sand spontaneously condensing and congregating on the other side.

However, Jens Eggers, who performed the experiment, says that the second law isn't really violated; although moving sand can be considered as a gas, individual grains can absorb and dissipate heat, unlike Maxwell's ideal gas, whose "temperature" is a measure of molecular motion. Thus, when sand grains start to congregate in one chamber, more and more grains will partake of a growing ordered state consisting of grains falling to the bottom of the container, while the unaffiliated grains will tend to be on the other side, still in "gaseous" form.

So even in today's cutting edge research, which continually pushes the boundaries of scientific knowledge, the Maxwellian Demon is an impossible beast. Unfortunately for those who chase after the pipe dream of perpetual motion, the laws of thermodynamics remain intact.