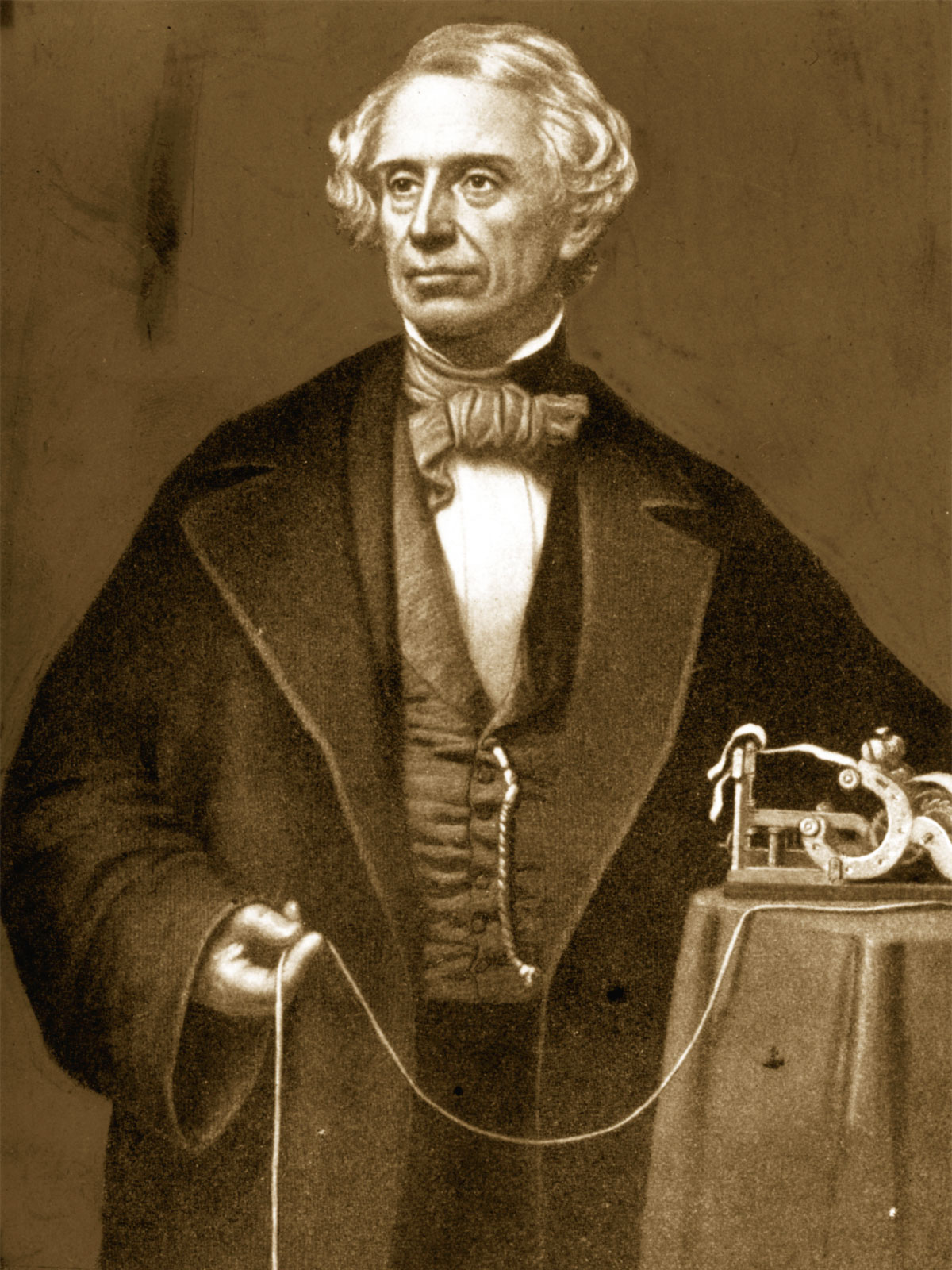 Sometimes technological innovation can come from the most unlikely sources. Samuel Finley Breese Morse was born in Charlestown, Massachusetts in 1791, the son of a local pastor. He was not trained as a scientist, but rather was a professional artist. Although largely an indifferent student, his interest was piqued by the then newly-developing subject of electricity. After graduating from Yale in 1810, he lived in England, studying art, exhibiting his work at the Royal Academy in 1813 and spending roughly 10 years as an itinerant artist specializing in portraiture, unaware that his passing interest in electromagnetism would eventually revolutionize global communication.

The electric telegraph makes use of the relationship between magnetism and electricity. During the early 1790s, the Italian scientist Alessandro Volta invented an electrochemical cell that made a steady source of electric current available. In 1820, the Danish physicist Hans Christian Oersted discovered that an electric current will cause a magnetized needle to move. This principle is the basis of the telegraph, in which a current is varied systematically according to a code. [As a telegraph key is moved up and down, it makes or breaks an electric circuit and transmits a signal as a series of electric pulses.] In 1825 the British electrician William Sturgeon invented the electromagnet, and physicists William F. Cooke and Charles Wheatstone, working together in Great Britain, used this discovery to develop a rudimentary telegraph in 1837.

In 1832, while returning to the U.S. on the ship Sully from another period of art study in Europe, Morse overheard a conversation about the newly discovered electromagnet and conceived his own version of an electric telegraph, which ultimately proved to be more successful than the British version for a number of reasons, most notably its simple operation and relatively low cost, and eventually was adopted as the standard technique. Morse created his first model telegraph in 1835 and spent the next several years perfecting his invention with two colleagues, Alfred Vail and Leonard Gale. His electromagnetic machine worked by clicking dashes and dots to create or break current between the machine's battery and receiver. By 1843 he received government funding for his invention and constructed a mini-telegraph system along a railroad line between Washington, DC, and Baltimore, MD. On May 24, 1844, the first telegraph message was transmitted: "What hath God wrought!"

Morse is also credited with the development of the International Morse Code, a system of dots and dashes that can be used to send messages by a flash lamp, telegraph key, or other rhythmic device. The most famous Morse Code signal signifies distress: dot dot dot dash dash dash dot dot dot (SOS). While wire telegraphs were long ago replaced by new technologies, Morse Code is still used by professionals and amateurs alike in radio telegraphy.

By 1869, the first telegraph connected the East and West Coasts, and by the decade's end, the Associated Press began operations, transmitting news throughout the world. Outside newspaper offices in major cities around the country, crowds would gather to hear World Series scores and election results transmitted by telegraph. In the early 1900s, thousands of Western Union Telegraph Company offices sprung up in both small and large towns, connecting an ever-expanding frontier of the U.S.

The telegraph became the world's primary communications tool — one that not only linked cities and nations together, but a medium that connected loved ones separated by distance. The telegraph also played a pivotal role in military operations, first used at Varna during the Crimean War in 1854. It was widely used in the American Civil War, where rapid deployment techniques for land-lines were developed, and Abraham Lincoln became the first president to direct armies in the field from the White House. [Prior to this, presidents would wait days and sometimes weeks for news from the battlefields of distant wars.] Newspaper correspondents first used telegraphy during the Spanish American War in 1898. The first military use for radio telegraphy was during the Russo-Japanese War in 1904-05.

After a bitter legal battle with Vail that culminated in the U.S. Supreme Court, Morse's patent finally became official in 1854. Today, that first telegraph is housed in the Smithsonian Institute's National Museum of American History in Washington, DC. But Morse's contributions to society extend beyond the telegraph. He formed the National Academy of Design in New York City to promote American art appreciation, serving as its first president for almost 20 years. He also gave generously to educational causes, helped found Vassar College, and twice ran for mayor of the city, unsuccessfully. He died in New York City on April 2, 1872, at the age of 81.