April 1995: Discovery of the top quark at Fermilab 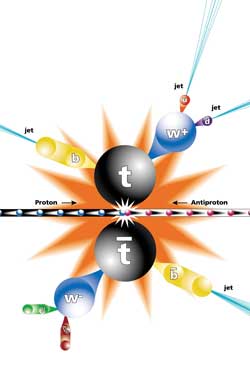 The Standard Model of particle physics holds that all matter is made from a small alphabet of elementary particles consisting of six quarks and six leptons. The heaviest of these, the top (or t) quark, is unstable and can only be detected when it is created artificially, for example in the collisions between the high-energy proton and antiproton beams at Fermilab in Batavia, Illinois. Physicists have been convinced that the top quark must exist since 1977, when its partner, the bottom (or b) quark, was discovered. Little did they know it would be nearly two decades before the top was finally found.

Produced in conjunction with its antiparticle the t-bar, the top quark quickly decays into a variety of daughter particles. The best way to search for the top was to look for its decay into a W boson and the next lightest quark, the b quark. A chief problem is the fact that the energetic b's and W's are also unstable and quickly decay into particle jets that typically emanate from less- interesting background collisions. Identifying the top quark required distinguishing a real top signature from those of background processes that can mimic one.

In 1985, when the Fermilab Tevatron collider was first activated, the search for the top quark was well underway, but early efforts at SLAC and at DESY in Germany proved fruitless. As the 1980s drew to a close, CERN, at that time the most powerful accelerator with energies up to 315 GeV, had failed to find the top quark. Experiments had determined that the mass of the top could be no lower than 77 GeV - beyond the limits of CERN's energy beams.

In the 1990s, the focus shifted to Fermilab and its two main experiments: the CDF and D0 detector collaborations. By the time researchers had begun taking data in 1992, the top mass limit had been pushed up to 91 GeV. Over the course of a decade, both the CDF and D0 collaborations constructed enormous, complicated instruments in order to isolate the top's signature. To do so, the two collaborations sifted through the debris from collisions of protons and antiprotons at energies of 1800 GeV.

After intensive analysis and scrutiny, the final results, made public nearly a year after researchers announced evidence for the quark's detection in April 1994, showed overwhelming evidence for the top quark from both CDF and D0. In simultaneous publications in April 1995, both teams reported a probability of less than one in 500,000 that their top quark candidates could be explained by background alone. The extremely large mass of the top - the current value is 175.6 GeV, similar to the mass of a gold nucleus, which contains 197 protons and neutrons - suggests that it may be fundamentally different from the other quarks. The sheer enormousness of the top's mass makes its decays fertile ground for new particle searches.

The top also has the shortest lifetime among quarks - less than 10-24 seconds - and decays as a free particle, the only quark to do so. All other quarks created in such a collision live long enough to pull more quarks from the vacuum and make complicated "jets" composed of many particles. The top's independence has enabled the Fermilab teams to determine its mass to far greater precision than the mass of any other quark.

Since then, Fermilab's Tevatron has been revamped and both the CDF and D0 collaborations have dramatically improved their detectors, resuming collection of data in 1999. The accelerator upgrades have allowed top quarks to be produced at 20 times the previous rate, while detector upgrades have improved the efficiency of identifying top quarks, allowing scientists a more detailed look at the top's characteristics. The groundwork has been laid for the Large Hadron Collider at CERN, which will begin operation in 2006, producing two proton beams colliding at 14 TeV - seven times the energy at Fermilab - generating almost one t-t bar pair per second.

Physicists can now use the top quark to help answer the many remaining questions about matter and the forces that govern the physical world. Chief among these is the Higgs boson, which is proving even more elusive than the top quark. It is the last undiscovered particle in the Standard Model's bestiary. A precise mass for the top quark will help theorists constrain the Higgs mass, improving its chances of detection at Fermilab or the LHC in the next decade.

The discovery of the top quark was not a "Eureka" event . "We discovered the top quark not in one lightning stroke, but over a long period of time, event by event," D0 physicist Nick Hadley (University of Maryland) said at the time of the discovery. "No single piece of evidence, no matter how strong, was enough to let us claim a discovery. We couldn't be sure we had found the top quark until we had seen so many events with the right characteristics that there was almost no chance the statistics were fooling us into making a false claim."