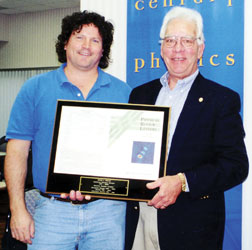 After a 30 year career as an APS editor, Gene Wells retired on 7 November 2001. Wells received his PhD in condensed matter physics from the University of North Carolina, Chapel Hill in 1969, and has been an Editor of Physical Review Letters in the area of condensed matter for some 20 years. Wells will relocate back to North Carolina with his wife Diana, the better to indulge their shared passion for golf. Once settled, he plans to work part time for APS as a remote editor.

Wells also held the position of Managing Editor for PRL, a responsibility now taken on by Reinhardt Schuhmann, known as Reiny. "Gene has been an exceptional editor, and he will be missed," said Schuhmann. "With the benefit of his tutelage and with the continued efforts of our excellent staff, we will strive to maintain the high standards he set." In the photo at left, at a party in his honor, Wells and Schuhmann hold a plaque presented to Wells of the cover and masthead of PRL.