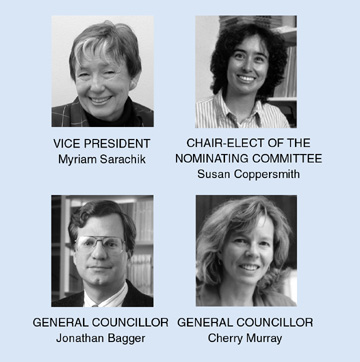 Members of the APS have chosen Myriam Sarachik, a distinguished professor of physics at City College of New York's City University of New York, to be the Society's next vice president. Sarachik is the third woman to be elected to the presidential line in the Society's 101-year history, following C.S. Wu of Columbia in 1975, and Mildred Dresselhaus of MIT (who became Director of the Department of Energy's Office of Science in August) in 1984. Sarachik's term begins January 1, 2001, when she will succeed William Brinkman of Bell Laboratories/Lucent Technologies, who will advance to become president-elect. Sarachik will become APS president in 2003, following George Trilling of Lawrence Berkeley National Laboratory in 2001 and William Brinkman in 2002.

In other election results, Susan Coppersmith, a professor of physics at the University of Chicago, becomes chair-elect of the APS Nominating Committee, which will be chaired by Curtis C. Callan of Princeton University in 2001. The Nominating Committee selects the slate of candidates for vice president, general councillors, and its own chair-elect. The choices are then voted on by the APS membership. Elected as new general councillors were Jonathan Bagger, a professor of physics and astronomy at Johns Hopkins University, and Cherry Murray, Senior Vice President of Physical Sciences Research at Lucent. Only two new general councillors were elected, compared to the four elected in previous years, to reflect recent changes in the APS Constitution, designed to reduce the size of the APS Council. These changes were published in the March 2000 issue of APS News.

VICE PRESIDENT
Myriam Sarachik
City College of New York/CUNY
Born in Antwerp, Belgium, Sarachik earned her PhD in 1960 from Columbia University. Following a year as a research associate at the Watson Laboratories of IBM while teaching at City College in the evening, she became a postdoctoral member of the technical staff at Bell Laboratories. She joined the faculty of City College in 1964 and has remained there ever since. Sarachik's research interests have ranged from superconductivity, disordered metallic alloys, and metal-insulator transitions in 3-D doped semiconductors, to hopping transport in solids and properties of single-molecule magnets. Her extensive APS experience has included service on the executive committees of the APS Forum for International Physics, and the Division of Condensed Matter Physics, and on the Committee on the Status of Women in Physics, and the APS Council, among others.

Of the many very important issues that the APS is currently dealing with, Sarachik believes one of the most urgent is the substantial decline in the number of students who now choose to study physics. "A shortage is rapidly developing (abroad as well as in the US) of bright young scientists and engineers to meet the needs of industry and government labs, and to provide the next generation of educators at our universities," she says. One of her goals as President will be to strengthen the society's efforts to make a career in physics attractive. "We need to be more effective in explaining the pleasures that a career in physics can bring, the satisfaction garnered from teaching, and the excitement of research and discovery; we must also have salaries competitive with other professional options," she says. "At the same time, we must continue to make as strong a case as possible to our legislators and the public that it is essential to the health and future of the nation to invest in the science that produces major discoveries which seed the technology of the future."

In her candidate's statement, Sarachik emphasized the need for the APS to play an ever-expanding role in a much broader arena: political, social, educational, and international. She praised recent efforts to organize a consortium with other science and engineering societies to make a strong case for public investment in physical science R&D, as well as its development of successful programs in educational outreach and science teacher preparation.

Sarachik also called on the APS to play a leading role in the internationalization of physics, facilitating the participation of American physicists in multinational endeavors. Finally, she expressed concern over how the APS divisions have grown increasingly separate, and its journals more specialized and narrowly focused. "It is important that we reassert and promote unity and a sense of shared vision," she said, pointing to the enormous success of last year's Centennial meeting in Atlanta as evidence "that physicists share common roots, interests and concerns."

CHAIR-ELECT OF THE NOMINATING COMMITTEE
Susan Coppersmith
University of Chicago
Coppersmith received her PhD in physics from Cornell University in 1983 and spent the next two years as a research associate at Brookhaven National Laboratory. Following a postdoctoral position at AT&T Bell Laboratories and a visiting lectureship at Princeton, she spent eight years as a member of the technical staff at Bell Labs. She joined the faculty of the University of Chicago in 1995. Her research interests include the properties of materials that are far from thermal equilibrium, particularly disordered materials, such as glasses, granular materials and disordered magnets.

In her candidate's statement, she praised the "vital role" the APS plays in informing non-physicists about the intellectual and practical benefits of the science, as well as the traditional activities of fostering communication between and within various sub-disciplines through its meetings and journals.

Coppersmith says she chose to run for office because of this, adding, "I am delighted to have the opportunity to help the Society respond effectively to the challenges and opportunities we will face over the next several years."

GENERAL COUNCILLORS
Jonathan Bagger
Johns Hopkins University
Bagger received his PhD from Princeton University in 1983 and took a postdoctoral research position at the Stanford Linear Accelerator Center, followed by three years on the faculty at Harvard University. He has been a member of the Institute for Advanced Study in Princeton, and is presently a member of the Fermilab Board of Overseers. His APS service includes a term as Secretary-Treasurer of the Division of Particles and Fields, as well as the Pricing Subcommittee of the Publications Oversight Committee. Bagger's research interests center on high energy physics at the interface of theory and experiment. His present work is focused on supersymmetry and supergravity between the weak and the Planck scales.

In his candidate's statement, Bagger concentrated on the need for the APS to continue to broaden its membership base and increase its reach, experimenting with new meeting and journal formats, and working with other societies to advance curriculum reform.

In fact, this was his primary motivation in running for APS office. "You really need a broad representation of fields on the APS Council," he says, "As General Councillor I will work to enhance communication between the divisions within APS, and to broaden the reach of the APS to other branches of science, to the government, and the public at large. We need a united front to advance the cause of science." Bagger also took issue with President Clinton's now-famous statement that the 20th century belonged to physics, but the 21st will belong to biology, noting, "I believe that physics is as important as never before," citing new materials, new ideas about the structure of matter and the shape of the universe, and new collaborations across fields as examples.

Cherry Murray
Bell Laboratories/Lucent Technologies
Murray joined Bell Labs as a member of the technical staff in 1978, after receiving a PhD in physics from MIT in 1973. Her positions there over the years have included serving as department head for Low Temperature and Solid State Research, Condensed Matter Physics Research, and Semiconductor Physics Research. She was director of the Physical Research Laboratory from June 1997 until March 2000, when she assumed her present position of Senior Vice President of Physical Sciences Research.

She has a broad background in experimental research in low-temperature, surface, condensed matter and complex fluid physics, with emphasis on light scattering and imaging.

Her own research program currently encompasses imaging of order-disorder transitions in colloidal crystals and self-assembly of optical materials. Her APS service includes stints on the Forums on Education and on Industrial and Applied Physics, as well as the Panel on Public Affairs.

Murray's candidate's statement identified numerous critical issues facing the Society in the coming millennium: increasing government funding of fundamental physics research; stemming the decline in enrollments in undergraduate and graduate physics programs; and communicating the excitement and importance of physics research to the general public.

Murray has extensive experience with the latter objective, having served on the APS Task Force on Informing the Public, and serving on the NRC committee that published the successful pamphlet, "The Physics of Materials: How Science Improves Our Lives."

As its membership becomes increasingly diverse, "The APS needs to serve better those who are trained as physicists and end up in a career in which their job title is not 'physicist' - either in industry, finance, engineering, other fields of science, or medicine," she said.