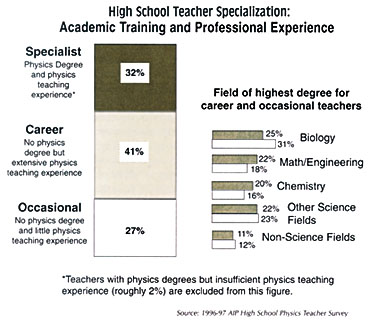 When Guilford High School in Connecticut abruptly found itself in need of a physics teacher this fall, science department chairman Bruce Faitsch discovered firsthand the difficulties of locating qualified high school physics teachers. The Fairfield Teacher's Agency confirmed his suspicions when he contacted them for help: physics teachers are in short supply, at least in the state of Connecticut.

The need for qualified physics teachers is particularly critical in light of a recent study by the American Institute of Physics (AIP), which found that over the last decade, the proportion of high school students who take physics has risen substantially, from about 20% to 28% (see APS News, November 1999). Yet a 1993 AIP survey found that, of the 30% of public school principals seeking to hire a physics teacher in the prior three years, more than one-third reported having difficulty finding qualified candidates, according to Michael Neuschatz, a senior research associate in AIP's Education and Employment Statistics Division. At private schools, where 41% of principals reported searching for a physics teacher, 40% had difficulty in finding qualified candidates.

This seems to be in keeping with national trends. A recent survey of schools and staffing conducted by the Department of Education's National Center for Education Statistics forecast a need of about 2.4 million teachers from 1998 through 2008. However, Neuschatz cautions that this figure must be viewed in context, since the forecast is based on speculative assumptions about teacher continuation rates, class size, and student to teacher ratio. The department also acknowledges that as much as one-third of this projected demand will most likely be filled by trained teachers returning to the workforce after retiring or pursuing other career options. Indeed, Faitsch has hired a retired physics teacher willing to return for one semester to meet the immediate demand, although his search continues for a more permanent solution.

For Neuschatz, the overriding issue in science education is the quality of new elementary and middle-school teachers, particularly in terms of their science and mathematics backgrounds. While reviewing the physics curriculum offered at two-year colleges - where a large proportion of elementary education majors reportedly get their start - intermediate algebra and an introductory physics course were required for automotive mechanics, but not for those in the elementary education program. Other studies have shown that elementary education majors tend to have some of the lowest SAT scores of any college-bound group, according to Neuschatz.

The situation is much improved at the high school level. The AIP survey found that one-third of high school physics teachers have earned an undergraduate or graduate degree in physics or physics education, while another 12% have a minor in one of the two fields. The remainder generally have degrees in another field of science, mathematics, or science or mathematics education, and Neuschatz reports that cases of utterly unqualified instructors are rare. "This in no way implies that there is a generous supply of well-trained high school physics teachers ready to lead classes in the subject," he says. "But it does show that the situation is less dire than is often depicted, and that, if anything, teacher preparation seems to be improving, albeit slowly."

The APS, in partnership with the AAPT and AIP, has led the physics community in recently becoming involved in colleges and universities to produce more and better-prepared teachers of physics and physical science according to APS Director of Education Fred Stein. For the past seven years there have been efforts by science and mathematics departments to improve their preservice programs through the NSF-supported Centers for Excellence in Teacher Preparation in 14 states. Last December, the APS and its partners proposed a five-year project to the NSF to facilitate partnerships in colleges and universities between departments of physics and education to directly address the shortage of qualified physics teachers.

The reluctance of principals to bend or change the rules for hiring new teachers does not encourage applicants with more science background but fewer education credits. According to Neuschatz, only 9% of the public school principals surveyed in 1997 said they had altered hiring procedures in the last four years, and only 4% of the remaining respondents were aware of plans to initiate such changes in the future. Among private schools, where principals have more latitude in their hiring practices, 16% reported rule changes and half of those used those changes to hire physics teachers.

Faitsch believes that graduate students in physics could comprise a large potential pool of high school physics teachers, but admits this would require a significant change in attitude on the part of university physics departments. Several students at Yale expressed interest in the Guilford position, and one candidate was equally interested in coaching wrestling in the evenings. However, he found that the university tends to discourage its graduate students from teaching outside the institution, and ultimately most of the Yale candidates were unwilling to risk their research funding. Nor is Yale unique in this regard.

Ultimately, in Faitsch's experience, "the people who last in education tend to be those who wanted to teach in the first place, and then chose a subject," he says. "I've told all the juniors and seniors here at Guilford, 'If you have any interest in teaching, consider going into physics.'"