An interview with David Moncton

This month, we devote the Back Page to an in-depth interview with David Moncton, director of the Spallation Neutron Source (SNS), a neutron scattering facility being built at Oak Ridge National Laboratory by a consortium of national labs that includes Argonne, Lawrence Berkeley, Brookhaven, and Los Alamos National Laboratory. Once completed, the SNS is expected to attract between 1000 and 2000 scientists and engineers each year from universities, industries, government labs and other nations. (See www.ornl.gov/sns for more information about the project.)

Yet when Moncton came on board in February 1999, the project was a troubled one. Despite unqualified praise for the obvious scientific merits of the SNS, House Science Committee Chairman James Sensenbrenner, Jr. (R-WI) expressed concern about project management and cost and schedule estimates, recommending that funds allocated for actual construction of the facility be withheld until these concerns were satisfactorily addressed. This monumental task fell to Moncton, and he reports on the project's status below. Support from the scientific community has been strong. Last November, the APS Council unanimously endorsed a statement urging Congress to provide the necessary funding for timely completion of the SNS (see APS News, January 2000).

Q: Much of your work over the last year has centered on meeting seven prerequisites issued by Congress to release allocated construction funds for FY2000. What were some of the major hurdles you had to overcome, and how did you meet those requirements?

Several were management issues. Congress wanted clarification that senior project management positions have been filled by qualified individuals, as well as a revised project management structure integrating the staff of the collaborating laboratories under a single project director. These were officially completed as part of a review last July. They also wanted cost baseline and project milestones for each major construction and technical system activity, consistent with the overall cost and schedule submitted to the Department of Energy's FY2000 budget. DOE engaged an outside contractor to independently to review the plans for the project and certify that it was the most cost-effective means to complete the facility.

Congress also desired binding legal agreements that specify the duties and obligations of each laboratory of the Department. We accomplished that with a memorandum of agreement signed by all the lab directors in the consortium. In particular, it set out legally binding performance measures that must be met by all contractors, included as part of their annual performance appraisal. If the participating labs were to perform below expectations, then in principle it's possible for the project to influence their performance appraisal and therefore the contractor fee.

There was also a Congressional request for official delegation by the Secretary of Energy of primary authority for the SNS to the project director. That was accomplished through a document called the Project Execution Plan, describing the interface between the project and the DOE, and the various roles of DOE officials and project officials. The Secretary signed it last fall. Congress also requested annual reports on the SNS project as part of the DOE's annual budget submission. That didn't require unusual action, since it's something the DOE does every year as part of its budget submission. We will simply continue the normal reporting.

Q: Another major bone of contention was a proposed tax on the project to be levied by the State of Tennessee, to which Congress objected strongly. How was that issue resolved?

That was really an issue between the Federal government and the State of Tennessee; we were more or less bystanders, but interested bystanders! Congress felt quite strongly that Tennessee should exempt the SNS from the proposed tax, and the Tennessee legislature approved such a proposal within the first three weeks of its legislative session in January. And it passed unanimously in both chambers. That was greatly facilitated by the University of Tennessee, which is taking over as a contractor for Oak Ridge. The university has very good contacts in the state legislature and they helped us make our case. That decision will provide the SNS with about $30 million of additional funding. We're using it to purchase scientific instruments to enable us to get a lot more bang for the same bucks.

Q: How do you feel about the prospects for the SNS one year later, after such a major management overhaul?

I think we met the challenge. The SNS one year later is in much better shape. I think we're going to see a healthy president's budget; we're requesting $281 million. And I hope we get Congressional support for the full project, including its management - the kind of support that has always been there for the scientific mission. Personally, I never quarreled with Sensenbrenner's position. The project had serious management issues that had to be dealt with, and this list was perfectly consistent with the actions we felt needed to be taken right from the outset to improve the quality of management. Since we concurred with the sentiment, we were happy to comply. In fact, we accomplished most of those goals in six months. The Tennessee legislature simply wasn't in session until January.

Q: Why did you decide to accept the position of director of the SNS, particularly at such a critical juncture, when the project's future seemed to be in jeopardy?

I grew up in the field of neutron scattering. I was personally frustrated by the lack of new neutron sources from the early 1970s to the late 1980s. The US, which had invented this technology, was well behind Europe after the construction of the ILL in Grenoble. New facilities are the engine that drives science in particular areas: high energy physics, neutron and X-ray research can't really move ahead without regenerating their infrastructure and building exciting, new facilities periodically. Thirty years without a new facility is a long time for a field to survive.

I also had the experience of constructing the Advanced Photon Source, and some of the top people who had worked on that project were also available to work with me on this. I thought we could bring our experience there to bear very quickly on the SNS and turn the project around. We certainly did not want to have this project cancelled.

Q: Now that you've brought the project back on track, what are some of the challenges you face in the coming year for the SNS?

Now we have to actually construct the facility. We currently have a small crew of workers at the construction site, but over the course of this year that's going to build up substantially, and we need to be ready with design details and procurements. The President's budget shows a six-month extension of the project schedule from December 2005 to June 2006. That's what we call a late finish date. We actually now plan to finish about a year earlier, in the summer of 2005.

There are also some significant technical issues. One has to do with the adoption of superconducting technology for the LINAC. We're convinced that will offer a substantial improvement in beam availability. Also, from a manufacturing standpoint, there's a stronger infrastructure in the commercial world for the production of superconducting cavities than for the production of copper cavities. We want to fully implement that change in the next month or so. We're inviting Jefferson Lab to join the partnership, to take advantage of their experience in superconducting technology. We've also been working with the NSF who are anxious to participate in the construction of a second target station which will more than double the scientific impact of the SNS.

Q: What are some of the lessons learned from the difficulties of the SNS?

In a sense, we re-learned an old lesson: You don't have that many chances to make a good first impression. The system is not very forgiving. And I'm not saying it should be. After all, it's the taxpayers' money, and they have a right to hold science accountable. One can quibble and say, "Look, it's very difficult to know several years in advance exactly what it will cost to build a project of this magnitude with all its new technology." But we do have the experience from many projects that have been successfully executed over the last decade. Now we know how to make good estimates and manage the projects within those estimates.

The DOE's Office of Science has completed numerous successful projects over the last 15 years. The only problem was the SSC, which was effectively exempted from the normal peer review process. That's an important lesson. The Office of Science has developed a discipline based on peer review - every six months there's a major review - and that system has been internalized by the managers of DOE science projects. We conduct many of our own reviews in preparation for these semi-annual reviews. Perhaps we do it too much, but this review culture has turned out to be extremely valuable. We don't have a monopoly on wisdom, and any large project can benefit by bringing people in with outside expertise, both from the US scientific community and from abroad. Good advice is essential.

Q: With all the challenges you've encountered as director of the SNS, were there any pleasant surprises along the way?

Frankly, I went into this somewhat skeptical about the level of commitment of the other national laboratories. This project is unusual in the scope of its partnership; there has never been a collaboration of this many labs on a project this size, and a strong level of commitment by all the labs is essential for its success. Having worked closely with the directors of all of these labs, I have been very impressed by the level of commitment that they all have shown. It is essential to have the full attention of the upper management of the partner laboratories and the full personal commitment of the lab directors. It's definitely there for this project, which will certainly benefit the SNS throughout its construction phase. I have also been very gratified by the endorsements the SNS has received, including the APS Council resolution. The National Academy of Sciences has endorsed the SNS through its Solid State Sciences Committee. These kinds of broad endorsements from the scientific community don't happen very often, and demonstrate that there's essentially unanimous support for this project in the scientific community. 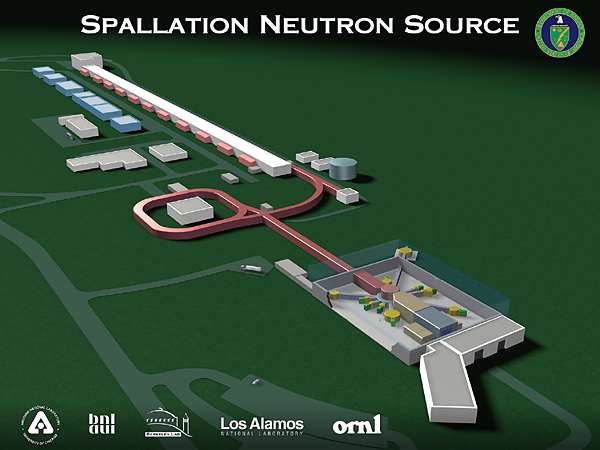