To Advance and Diffuse the Knowledge of Physics

100 Years of the American Physical Society 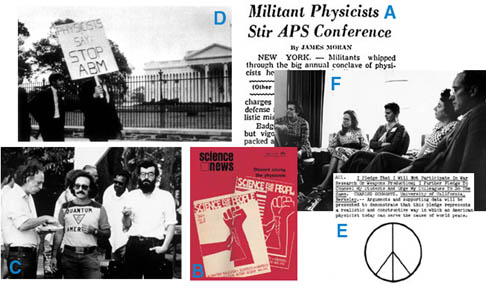 1967
Schwartz Amendment - In 1967, Charles Schwartz, a nuclear physicist and antiwar activist at Berkeley, petitioned the APS to amend the constitution to allow 1% of members to call for a vote on any social or scientific issue. The Council opposed the amendment. It was defeated by a vote of members, who thought APS should not take a public stand on social issues.

Debate over the Schwartz amendment led to soul-searching on the social responsibilities of physicists and the APS.

1968
Chicago Protest - In the wake of riots and police brutality at the Democratic National Convention in Chicago, physicists began to petition the APS not to hold its 1970 meeting there.

In 1969, the APS Council polled members and upheld its decision to keep the meeting in Chicago. (Image A)

1969
Physics-and-Society Division Proposed
Scientists and Engineers for Social and Political Action (SESPA) organized by Martin Perl and Charles Schwartz at January APS meeting. Radicals called for "Science for the People." (Images B, C)
APS-sponsored debate on the anti-ballistic missile system (ABM) with Hans Bethe, Donald Brennan, George Rathjens, and Eugene Wigner at the April meeting.
Protest March - During the April APS meeting, SESPA held an orderly march of 250 physicists to the White House to protest the ABM. (Image D)

1970
Peace Breaks Out in BAPS Abstract (Image E) Bombing at University of Wisconsin-Madison - Violence directed at an Army-funded mathematics research center led to the mistaken bombing of the nuclear physics labs. (A post-doc was killed.)

1971
Proposed Amendment on Professional Responsibility - Resolution to change the Society's mission statement to include the phrase "The Society...shall shun those activities which are judged to contribute harmfully to the welfare of mankind." Not passed.

1972
Forum on Physics and Society - organized with broad constituency. Concerned with the social consequences of physics, the Forum has sponsored programs at APS meetings and created awards in recognition of science policy work. It also initiated the Congressional Fellowship program whereby physicists are placed on Capital Hill in order to offer their technical expertise to members of Congress.
Women's Rights - Committee on the Status of Women in Physics formed. (Image F)

1975
Panel on Public Affairs - Formed in 1975, POPA has convened panels of experts to study and voice the physicists' viewpoint on:

1979
ERA Boycotts - Council resolved to boycott states that had not ratified the Equal Rights Amendment.