Is There an Unconscious Discrimination Against Women in Science?

"Discrimination" is an interesting word. There are two kinds of meanings: positives that describe the mental process of differentiation, discernment or judgement; and negatives that describe the misuse of differentiation to treat unfairly those who are different. My simplistic theory is that in unconscious discrimination against women in science, the latter follows from the former. I will argue that unconscious discrimination arises because the application of our tools for discrimination between different scientists selects for many things, including qualities that are at best very indirectly related to being a good scientist, and that clash with cultural pressures.

In particular, our selection procedures tend to select not only for talents that are directly relevant to success in science, but also for assertiveness and single-mindedness. This causes problems for women (and others as well). There are probably other gender-linked traits that we also select for, but I will focus on these two because I think that they are particularly obvious and damaging. 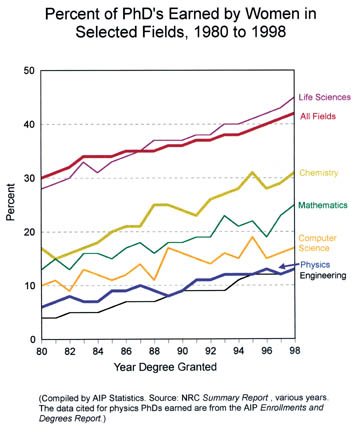 Do we really select for assertiveness and single-mindedness?
This question hardly needs an answer. There are many obvious examples of situations in which this selection is almost explicit. One of my favorite examples is the Physics GRE exam. I can expand on this if necessary. It is not impossible to succeed as a scientist without being assertive and single-minded, but the system encourages and rewards people with these traits in a number of ways.

How does selection for assertiveness and single-mindedness differentially affect women?
Why should this matter more for women than for men? I realize that I am treading on dangerous ground here. Obviously, for these traits, as for any other similar traits, there is a broad distribution in both men and women, and the distributions overlap. Nevertheless, the distributions of assertiveness and single-mindedness are strongly skewed towards men. I think that most people would agree that there are very strong cultural biases that make it more difficult for women than for men to be assertive and single-minded.

Isn't this a problem in academia in general? Why is it worse in science?
I think that the answer is that in science, we actually do have quantitative tools. There are quantitative ways of distinguishing good science from bad science, and for training good scientists. These tools really exist and they work! We produce people who do great science. This system has been honed over many years to the point that we now tend to take it for granted. It is this very success that makes it possible to accept the system uncritically, and that makes unconscious discrimination easy. I hasten to add, however, that just because we have a system that produces good scientists does not mean that the system is not eliminating many others who could be equally good.

Are assertiveness and single-mindedness really necessary (or even desirable) for a scientist? This question is more difficult to answer. I am not sure that any controlled experiments have been done. My personal view is that what we want in a scientist is not assertiveness, but intellectual curiosity and thoughtfulness, and not single- mindedness, but dedication and perseverance. For the moment, I hope that you will accept this as a working hypothesis.

If assertiveness and single-mindedness are not really what we want, why did the system develop to select for these, rather than what we are really interested in?
This is a question for historians and sociologists of science. But my suspicion is that the answer here has two parts. The system could develop because when it developed, there was overt discrimination against women, and so there was no selective pressure to develop a system that worked for women as well as men. It actually did develop, I think, and persists, because assertiveness and single-mindedness are easier to measure quantitatively than the qualities that we are really interested in, intellectual curiosity, dedication, and so on, which have more human dimensions. Assertiveness and single-mindedness are stand-ins that worked pretty well for a large group of men in previous generations. Even though they are no longer very appropriate, our system still selects for them. And because it "works" (at least if you ignore gender discrimination and such things), we haven't tried very hard to do better.

How does the selection for assertiveness and single-mindedness give rise to unconscious discrimination against women?
Here there are many answers. From the top down, when department chairs and search committees look for the best scientists, they tend to exclude those who are not demonstrably assertive and single-minded. This tends to eliminate women. In fact, the situation is worse, because the cultural bias against assertiveness in women puts even those women who are selected by the system at a disadvantage. They may be perceived as good scientists, but disagreeable people. From the bottom up, the mismatch between the cultural stereotypes of women and scientists makes it harder for girls to develop as scientists. They are constantly pushed towards other vocations. I hope that this is changing, but if so, the process has been very slow.

This contributes to the familiar pipeline problem that we hear so much about today. There are not as many women as men in the pool at any level and the disparity increases as we go up the academic ladder. Those of us who are committed to increasing the participation of women in science find these pipeline issues incredibly frustrating. The small number of women in the pipeline makes it much more difficult to counteract the effects of unconscious discrimination in hiring. We have to convince search committees to work hard twice; both to overcome their preconception that good scientists must be assertive and single-minded, and also to identify women from a smaller pool.

What can be done about this?
The good news is that the system is not evil, just misguided. But the bad news is that unconscious discrimination arises due to deep-seated habits that will be very hard to change. There are many proposed ideas for changing this from the bottom up. I hope that we can do it by changing our system of educating and evaluating scientists, rather than simply encouraging girls and women to break out of the cultural stereotypes against assertiveness and single-mindedness. But meanwhile, we should try to support women's sports programs, and other things that help break down these stereotypes. From the top down, there are a few strategies that may help in hiring. The idea, in each case, is to try to open up the search procedure and make it easier to break out of the same old system.

Howard Georgi is Mallinckrodt professor of physics at Harvard University. Excerpted from Who Will Do the Science in the Future, National Academy Press, Washington DC, 2000.