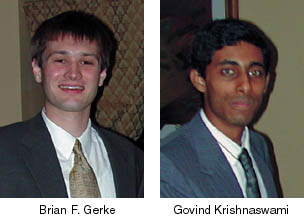 Brian F. Gerke, a recent graduate of Williams College in Williamstown, MA, and Govind Krishnaswami, a recent graduate of the University of Rochester in New York, have been named by the APS as recipients of the 1999 APS LeRoy Apker Award for their research achievements as undergraduates. The Apker Awards were established by Jean Dickey Apker as a memorial to her husband, LeRoy Apker. Both were physicists employed at the General Electric Research Laboratories in Schenectady, NY.

Each year the Apker Award selection committee invites five or six finalists out of the nominees to give presentations of their undergraduate work. Award recipients are selected from the finalists. In general, one is selected from a PhD-granting institution and another from a non-PhD-granting institution. Finalists receive a $1000 award, a certificate, and expenses to an APS general meeting. Their undergraduate institutions receive $500 each. Apker Award recipients each receive an additional $5000 and an invited paper at an APS general meeting. Their institutions also receive a $5000 grant to further encourage undergraduate research.

Gerke was honored for his senior thesis, entitled, "Ultrafast Photoisomerization Dynamics: A Tight-Binding Model Applied to Small Alkenes," based on an original computational study he conducted of the photoisomerization of conjugated polyenes, which are related to retinal, the molecule in the eye's retina that detects light. His model explains how these molecules can change shape within tens of femtoseconds in response to light, and Gerke applied it both to small double-bonded molecules, and to larger ones, switching to numerical methods to compute the latter. [Part of his thesis has been submitted to The Physical Review.]

As a sophomore, Gerke spent one summer as a research intern at William and Mary College, where he worked on a possible astrophysical test for an exotic form of matter. In addition to his physics studies, Gerke completed a second major in English and sang in The Elizabethans, a Renaissance vocal music ensemble. At commencement, Williams College awarded him a Herchel Smith Fellowship for two years of graduate study at Cambridge University in England as a master's student in theoretical physics and mathematics. Gerke plans to pursue a PhD in physics at a US university when he returns.

A double major in physics and mathematics, Krishnaswami quickly distinguished himself as one of the most promising students the university has seen in years, and has won every major honor the institution bestows to undergraduates in physics and mathematics, including a teaching award as the best undergraduate teaching assistant. In 1998 he won a Fulbright Award for excellence in advanced physics, and is believed to be the first undergraduate student to present three papers (in experimental physics, mathematics, and theoretical physics) at the National Conference on Undergraduate Research in April 1999.

As a sophomore, Krishnaswami spent the summer working with Rochester professor Arie Bodek at Fermilab on the CCFR/NuTeV neutrino experiment, searching for the oscillations of muon neutrinos to electron neutrinos. When he returned to school in the fall, he opted to work on aspects of QCD theory, particularly a means of deriving the structure functions of hadrons from the first principles in QCD, a problem that has stumped physicists for the last 25 years. His resulting thesis, part of which has appeared in Physical Review B, combines physical importance and mathematical elegance, according to his thesis advisor and collaborator, S.G. Rajeev. "The best theoretical physics is as real as an experiment, and as beautiful as mathematics," Rajeev explains, adding, "[Krishnaswami's] work was the last piece of the puzzle to fall into place; we are well on our way towards a theory of the structure of the proton." Krishnaswami has elected to remain at Rochester for his graduate studies on a Sproull Fellowship.