Zero Gravity: The Ligher Side of Science 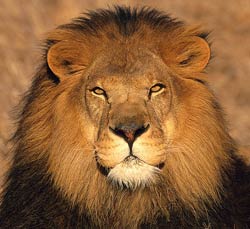 Problem: Catching a Lion in the Desert

Hunting lions in Africa was originally published as "A contribution to the mathematical theory of big game hunting" in the American Mathematical Monthly in 1938 by "H. Petard, of Princeton, NJ" [actually the late Ralph Boas].

The Dirac Method
We assert that wild lions can ipso facto not be observed in the Sahara desert. Therefore, if there are any lions at all in the desert, they are tame. We leave catching a tame lion as an exercise to the reader.

The Schroedinger Method
At every instant there is a non-zero probability of the lion being in the cage. Sit and wait.

The Quantum Measurement Method
We assume that the sex of the lion is ab initio indeterminate. The wave function for the lion is hence a superposition of the gender eigenstate for a lion and that for a lioness. We lay these eigenstates out flat on the ground and orthogonal to each other. Since the (male) lion has a distinctive mane, the measurement of sex can safely be made from a distance, using binoculars. The lion then collapses into one of the eigenstates, which is rolled up and placed inside the cage.

The Newton Method
Cage and lion attract each other with the gravitation force. We neglect the friction. This way the lion will arrive sooner or later in the cage.

The Special Relativistic Method
One moves over the desert with light velocity. The relativistic length contraction makes the lion flat as paper. One takes it, rolls it up and puts a rubber band around the lion.

The General Relativistic Method
All over the desert we distribute lion bait containing large amounts of the companion star of Sirius. After enough of the bait has been eaten, we send a beam of light through the desert. This will curl around the lion so it gets all confused and can be approached without danger.

The Heisenberg Method
Position and velocity from a moving lion cannot be measured at the same time. As moving lions have no physical meaningful position in the desert, one cannot catch them. The lion hunt can therefore be limited to resting lions. The catching of a resting, not moving, lion is left as an exercise for the reader.

The Thermodynamics Method
We construct a semi-permeable membrane which lets everything but lions pass through. This we drag across the desert.

The Atomic Fission Method
We irradiate the desert with slow neutrons. The lion becomes radioactive and starts to disintegrate. Once the disintegration process has progressed far enough, the lion will be unable to resist.

The Magneto-Optical Method
We plant a large, lense-shaped field with cat mint (nepeta cataria) such that its axis is parallel to the direction of the horizontal component of the earth's magnetic field. We put the cage in one of the field's foci. Throughout the desert we distribute large amounts of magnetized spinach (spinacia oleracea) which has, as everybody knows, a high iron content. The spinach is eaten by vegetarian desert inhabitants which in turn are eaten by the lions. Afterwards the lions are oriented parallel to the earth's magnetic field and the resulting lion beam is focused on the cage by the cat mint lense.