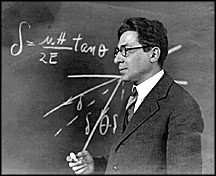 Isidor Issac Rabi was born 100 years ago, nine months before the birth of the American Physical Society. He completed his dissertation and his PhD in July 1926, just days from his 28th birthday. One year later, he left for Europe to experience physics at the cutting edge.

The new quantum mechanics, created in Europe during the period 1925-1927, fascinated Rabi. While he was especially intrigued by the Stern-Gerlach experiment, it was Schrvdinger's wave mechanics, published in early 1926, that provided Rabi his first opportunity to use the new theory. With Ralph Kronig, Rabi solved the Schrvdinger equation for the spherical top molecule and gave a complete treatment for such a molecule. Kronig's and Rabi's paper on the spherical top molecule was rejected by the editor of Physical Review because it was too long. Kronig and Rabi shortened the paper and their results were published in the February, 1927 issue of Physical Review. In spite of this successful foray into quantum mechanics, Rabi was restive. He recognized that America was really backward in physics - really underdeveloped and Rabi felt the need to observe and work with those who had created the new theory.

Many young American physicists were in Europe studying at those centers where quantum mechanics was the daily passion. Rabi spent two years in Europe working with Bohr, Pauli, Stern, and Heisenberg. The experience had a profound effect on Rabi. In subtle and not so subtle ways, Rabi and the other American visitors were made to realize that American physics was regarded by their hosts as second rate. Rabi, Ed Condon, Robert Oppenheimer, and others promised themselves that they would change this and bring American physics to greatness. "And we did," said Rabi.

Rabi was one of the most influential leaders who brought American physics out of the shadows cast by the greatness of European physicists. Rabi did this through his roles as physicist and citizen.

During the decade of the 1930's, Rabi established his molecular beam laboratory at Columbia University where, together with his illustrious students, he measured nuclear properties with ever increasing precision. A beautiful evolution of experimental techniques culminated with the discovery of the magnetic resonance method in 1938. The magnetic resonance method revealed the quadrupole moment of the deuteron which required the introduction of new nuclear forces. Rabi won the Nobel prize in 1944 for this work and since that time, four of Rabi's students have also won this high honor.

Rabi's physics opened doors for him to serve America as a citizen. He was deeply concerned about the war in Europe and in December 1940 left his laboratory just at its peak of productivity. He went to the newly formed MIT Radiation Laboratory where he became Associate Director for Advanced Research. After the war, he continued his physics, but in addition became active in science policy at the national and international levels. He almost single-handedly transformed the Science Advisory Committee to the President's Science Advisory Committee which reported directly to the President. Through the United Nations, he and Dag Hammarskjvld organized the first International Conference on the Peaceful Uses of Atomic Energy. In 1984, Bill Moyers featured Rabi on a television program called, "Rabi: Man of the Twentieth Century. During the final years of his life, Rabi was regarded as the dean of American physics.