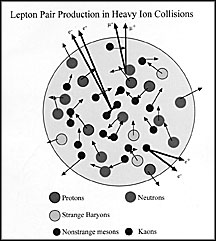 In today's universe, quarks are never observed individually but only in groups of twos or threes held together by particles known as gluons. Aiming to recreate some of the conditions of the very early universe, physicists are smashing together nuclei at high energies and attempting to produce a quark-gluon plasma (QGP), a hot soup of many individual quarks and gluons. Physicists expect to see the QGP when Brookhaven's Relativistic Heavy Ion Collider (RHIC) begins smashing together nuclei at unprecedentedly high energies next year, but some researchers who spoke at a Saturday morning session at the APS/AAPT Joint Spring Meeting in Columbus, Ohio, have suggested that QGPs may have already been produced in lower-energy experiments at CERN's Super Proton Synchrotron.

The matter in the early universe was almost certainly QGP until the temperature fell below a few trillion degrees, a millionth of a second after the Big Bang. It is also possible that QGP exists in the core of neutron stars. Today, scientists are trying to create a QGP in the laboratory. Although calculations show that the QGP should exist, the temperature and density required to create one are less well determined. The best estimates are that the quark gluon plasma may appear at temperatures around 2 trillion degrees centigrade, which may be produced by smashing heavy nuclei like lead together at high energies.

Many techniques have been proposed to detect a quark gluon plasma once it is produced. Olivier Drapier of the Institut de Physique Nucleaire in Lyon, France, has collected data regarding one possible signature, suppression of J/psi production, a particle composed of a charmed quark and a charmed antiquark bound together. The production rates for J/psi in nuclear reactions can be estimated based on rates measured in proton-proton collisions. However, in a QGP, the J/psi is likely to be quickly destroyed, because of the higher interaction probabilities in the plasma. Thus, a deficit of J/psi may indicate the presence of a quark gluon plasma.

Drapier presented results on J/psi production in collisions of lead nuclei from the NA-50 experiment, conducted at CERN. He was followed by Dmitri Kharzaev of Brookhaven National Laboratory, who discussed recent theoretical work on J/psi production, specifically focusing on whether models which do not include the QGP can explain the recent data. His talk included the idea that a briefly created QGP cracked the J/psis into single quarks, which became too far separated to recombine when the QGP quickly cooled.

The remaining two speakers, Johann Peter Wurm from Max Planck Institut in Heidelberg and Volker Koch from LBL, focused on closely related topic: the production of low mass lepton (electron or muon) pairs. Lepton pairs are also produced in heavy ion collisions. Like the J/psi, they are a sensitive probe of the reaction dynamics. Unlike J/psi, they are produced by several different mechanisms, including the decays of mesons (bound states of a quark and an anti-quark), bremsstrahlung (electromagnetic interactions of the nuclei), and annihilations of meson-antimeson pairs.

Theorists typically mix a cocktail of these mechanisms, trying to explain the observed rates and invariant mass spectra. These "cocktails" fit the data well for collisions of lighter nuclei. However, for collisions of heavier nuclei, the data and theory differ significantly. This may be because the properties of known particles change when they are immersed in nuclear matter. Wurm discussed experimental data from accelerators at LBL and CERN on dilepton production. Koch complemented this with a discussion of recent calculations of changes in particle masses and decay modes when they are immersed in nuclear matter, and their effect on the dilepton mass spectrum.

According to Koch, the strong interaction QCD vacuum has plenty of structure, indicated by the existence of several condensates, particularly the chiral quark condensate. This in turn indicates that chiral symmetry in which the helicity of the quarks is conserved is spontaneously broken, implying that the quarks must be mass-less and thus travel with the speed of light. However, "We know that the constituent quark mass is rather large, about a third of the mass of the nucleon," said Koch. "This is because chiral symmetry is spontaneously broken in the vacuum of QCD."

Similarly, restoring chiral symmetry by melting the chiral quark condensate at high temperatures should cause the quark masses to become small, and since the light hadrons are made out of constituent quarks, their mass should drop as well. While this prediction is hotly debated, most researchers do agree that the mass difference between certain hdrons is exclusively due to the breakdown of chiral symmetry and thus should vanish once chiral symmetry is restored.

Because both of these techniques rely on relatively rare probes, charmed quarks and dileptons, progress has been limited by the statistical accuracy of the data. In 1999, RHIC will begin to collide gold nuclei at much higher energies than current accelerators. The data thus collected will extend these studies to considerably higher energies with improved statistics.