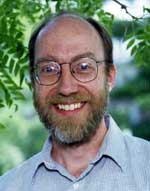 
"For his pioneering work on quantum teleportation, his widely cited contributions to quantum information theory, and his prolific engagement of undergraduate students in this research at the foundation of quantum mechanics."


William K. Wootters is the Barclay Jermain Professor of Natural Philosophy in the Department of Physics at Williams College. He received his B.S. in 1973 from Stanford and his Ph.D. in 1980 from the University of Texas at Austin, with a thesis in the foundations of quantum mechanics. He joined the faculty at Williams in 1982 and has spent sabbaticals at various institutions, including Santa Fe Institute and the University of Montreal. Most of his research has been in quantum information theory, focusing particularly on the quantitative analysis of entanglement, the use of entanglement in quantum communication, and the acquisition of classical information from quantum states. Currently he and his students are investigating a phase-space formulation of quantum mechanics based on finite fields.

Prof. Wootters is a Fellow of the American Physical Society and a recipient of the International Quantum Communications Award.