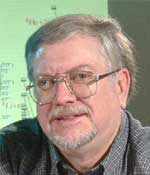 
"For development of quantitative, ab initio calculations of the properties of nuclei from A=6 to A=12, including deep physical insight into the nature of nuclear forces and the application of state-of-the-art computational physics"


Robert Bruce Wiringa was born in Houston, Texas in 1950 and graduated from Darien High School, Darien, Connecticut in 1968.  He attended Rensselaer Polytechnic Institute in Troy, New York, earning his B.S. in 1972, and the University of Illinois at Urbana-Champaign, where he received an M.S. degree in 1974 and a Ph.D. in 1978, working with Vijay Pandharipande on nuclear matter.  He was a Research Associate at Los Alamos Scientific Laboratory for two years before joining the Physics Division at Argonne National Laboratory in 1981, where he became a Senior Physicist in 2000.  At Argonne he began a long-term collaboration with Steven Pieper, as well as continuing to work with groups at Urbana, Los Alamos, and later at Jefferson Laboratory. His work has focused on the nucleon-nucleon and three-nucleon interactions, quantum Monte Carlo calculations of nuclear structure and reactions, and variational studies of dense nucleon matter and neutron stars.

Dr. Wiringa was a Visiting Associate and Lecturer at the California Institute of Technology in 1993.  He served as chief of the Argonne Physics Division theory group from 19942001.  He is a Fellow of the American Physical Society and shared the University of Chicago Medal for Distinguished Performance at Argonne with Dr. Pieper in 2000.  He has served on the Program Advisory Committee for the Institute of Nuclear Theory in Seattle, Washington, and on the Editorial Board of Physical Review C.