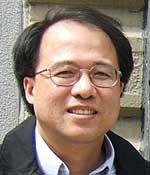 
Xiao-Gang Wen, Ph.D., is a Cecil and Ida Green Professor of Physics at the Massachusetts Institute of Technology (Cambridge). He is the author of the book "Quantum Field Theory of Many-Body Systems: From the Origin of Sound to an Origin of Light and Electrons” (Oxford). Dr. Wen completed his undergraduate work at the University of Science and Technology of China (Hefei) in 1982 and received his Ph.D. in Physics from Princeton University (N.J.) in 1987. Dr. Wen was the 1994 Overseas Chinese Physics Association Outstanding Young Researcher. For his doctoral thesis, Dr. Wen worked on monopole and world-sheet instantons in superstring theory. Dr. Wen now concentrates on highly entangled many-body systems,in particular, the phases of quantum matter beyond Landau symmetry breaking theory, which include topological order, the associated holographic boundary theory, as well as non-Abelian statistics and non-Abelian edge state in topological order. Dr. Wen also is interested in tensor category theory as a mathematical foundation of topological order and the emergence of all elementary particles from simple qubits as an application of topological order.